For seventh year, RIT and its Future Stewards Program recognized for academic, professional and cultural support to Native American students 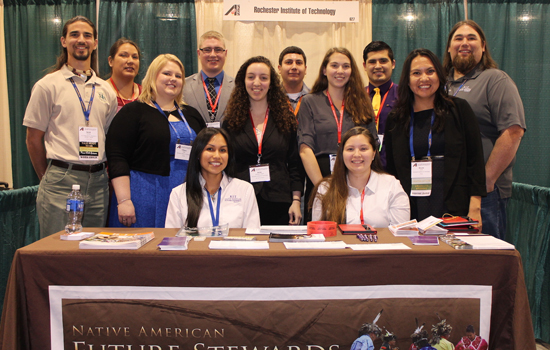 Members of the Future Stewards Program participated at the annual American Indian Science and Engineering Society conference, hosting a booth at the event to share information about the program’s services and events at RIT.

Rochester Institute of Technology was recognized in Winds of Change magazine as one of the Top 200 Colleges for Native American Students. It is the seventh time the university made the annual list, sponsored by the American Indian Science and Engineering Society (AISES), of top universities in the U.S. where significant numbers of Native American and First Nation students attend and graduate. Colleges are ranked on admissions selectivity, enrollment numbers, top majors and information about the American Indian community and support programs on the campus and within the region.

RIT is being recognized for its academic programming and support services for Native American scholars, its cooperative relationships established with New York state tribal leaders, and several research initiatives specific to Native American communities in the region. The university’s Future Stewards Program is central to its success in this area combining academic, professional and cultural support for Native American students in the program.

“We’ve had students who grew up in their cultures, but I’m seeing more students who did not. They have come to college, seen the Future Stewards Program and it sparked an interest,” said Nicole Scott (Navajo) program manager and advisor to the university’s Native American Student Association and the student chapter of AISES. “Being part of the program gives them the opportunity to explore and gain knowledge, not only of their own culture, their own backgrounds, but also the history of the Haudenosaunee.”

Much of the northeast is home to the Iroquois Confederacy, also known as the Haudenosaunee, the oldest living participatory democracy and inspiration for much of the United States’ representative government. RIT is just north of Ganondagan State Historical Site, part of the Seneca Nation, one of the confederacy’s six nations. The university has fostered relationships with its community through educational connections, research initiatives and collaborations with its tribal leadership.

“When you are on someone else’s land, you need to respect their customs and you need to have some knowledge of the land around you,” said Scott about the importance of connecting the campus with native communities. Each year, the group hosts events for Native American Heritage Month in November where participants can learn more about the students’ arts, language and culture. Annually, the group partners with RIT’s College of Liberal Arts to host the Symposium on American Indian Languages and is involved in research related to the Seneca Language Revitalization Project and the Iroquois White Corn Project at Ganondagan.

This past year, they presented The Iroquois Creation Story Film as part of their Native American Heritage Month programming. The film highlighted traditional native dancers, modern dancers, filmmakers and animators as well as time-honored Iroquois and contemporary musicians. Project partners included The Friends of Ganondagan, the renowned Garth Fagan Dance Company and Cathleen Ashworth, associate professor in RIT’s School of Film and Animation and the project’s artistic director.

“Native American is not just one culture, one group—it is 567 sovereign nations, each with their own traditions and histories,” Burnette said. “As the students learn about these nations, they help educate the larger community.”

Scott agreed. “College is that time where you get to explore other cultures and you can take advantage of the diversity that surrounds you. Not only are they learning in school, they are learning to become leaders. That’s something that will be very important outside of RIT. They will be better able to advocate for themselves.”