Awards made in two categories, 23 entries competed for $18,000 in prizes 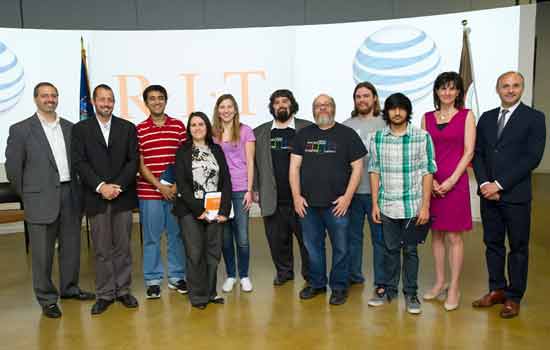 Four Rochester Institute of Technology students, four alumni and one staff member were among the winners of the 2014 AT&T Rochester Civic App Challenge.

AT&T and its challenge partners – RIT, Digital Rochester, High Tech Rochester and Hack Upstate – on May 13 announced the winners of the challenge, a two-month “virtual hackathon” in which developers leveraged open data to build smartphone apps that serve community needs. RIT hosted the challenge.

The winners – chosen from among 23 entries – were announced at a ceremony at RIT Center for Media, Arts, Games, Innovation and Creativity (MAGIC), after which developers demonstrated their winning apps.

“I am truly impressed with the diversity and quality of apps submitted in the Rochester Civic App Challenge,” said RIT MAGIC Center Director Andrew Phelps. “I am particularly pleased that so many of the winners have a connection to RIT, as current students, alumni or staff. RIT and the Greater Rochester area should take great pride in their work, which will benefit our community.”

First, second and third place, as well as honorable mentions, were given in two categories – apps created specifically for the challenges and those that were already under development before the challenge was launched.

Among the RIT winners were:

Challenge organizers said they were pleased with the participation and look forward to sharing the apps with the greater community.

“The quality of mobile apps created through the AT&T Rochester Civic App Challenge demonstrates the vibrance and talent of Rochester’s technology community,” said Marissa Shorenstein, New York president, AT&T. “We applaud our partners, RIT, Digital Rochester, High Tech Rochester and Hack Upstate, for collaborating with us on an initiative that demonstrates clear demand for programmers, both amateur and professional, to create mobile apps that help our communities connect, build businesses and streamline our daily lives.”

Winners were chosen by a panel of judges, who based their decisions upon the apps’ potential impact on Greater Rochester, execution and creativity or novelty.