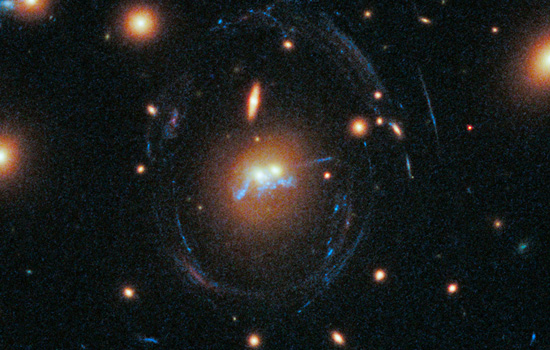 Stars forming like a string of blue pearls along two elliptical galaxies could be the result of a galactic merger, according to an international team of astronomers. The structure could reveal rare insights about elliptical galaxies.

Scientists from Rochester Institute of Technology helped analyze data from the Hubble Space Telescope showing elliptical galaxies coalescing at the core of a dense galaxy cluster. The study is part of a program sponsored by the Hubble Space Telescope—an international cooperation between NASA and the European Space Agency—to look inside 23 massive clusters first catalogued in the Sloan Digital Sky Survey.

Findings of the study, “A thirty-kiloparsec chain of ‘beads-on-a-string’ star formation between two merging early type galaxies in the core of a strong-lensing galaxy cluster,” are available online, at http://arxiv.org/abs/1407.2251 and in an upcoming issue of The Astrophysical Journal Letters.

“These data were originally taken for a completely different purpose—to study the bluish arcs on larger scales in the cluster,” said Chris O’Dea, professor in RIT’s School of Physics and Astronomy and a co-author on the paper. “We were not expecting to catch these two elliptical galaxies in this spectacular burst of star formation.”

O’Dea and co-author Stefi Baum, professor and director of RIT’s Chester F. Carlson Center for Imaging Science, were thesis advisers and mentors of the paper’s lead author, Grant Tremblay, a post-doctoral fellow at the European Southern Observatory in Garching, Germany, and an inaugural alumnus of RIT’s astrophysical sciences and technology Ph.D. program. Tremblay will join Yale University as a NASA Einstein Fellow in September.

The 100,000-light-year-long structure identified in the Hubble data is dotted with 19 young, blue star clusters like pearls on a string, evenly spaced and separated by 3,000 light-years. The star necklace will lose its shape in about 10 million years as each of the 19 stellar superclusters follows a different orbit, Tremblay said.

“This phenomenon has never been seen before in merging elliptical galaxies,” Tremblay said. “We have two big monsters and they’re playing tug-of-war with this necklace.”

Tremblay and his team suggest three possible scenarios that could have created the string-of-pearl stars between two elliptical galaxies: 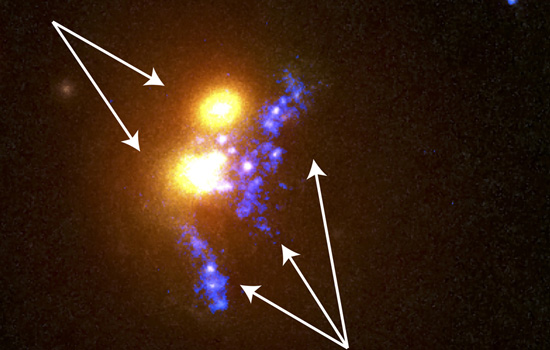 A zoom-in shows the two merging central cluster galaxies in yellow/orange and the “beads-on-a-string” star formation in bright blue. NASA, ESA and RIT