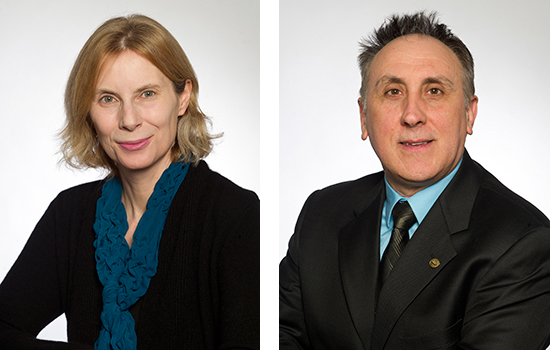 Two Rochester Institute of Technology professors who are leaders in gravitational-wave astronomy have won more than $1 million in federal funding to further their research.

Carlos Lousto and Manuela Campanelli, director of RIT’s Center for Computational Relativity and Gravitation, won separate multi-year grants from the National Science Foundation worth $600,000 and $435,000, respectively.

The $600,000 grant will support Lousto’s research modeling black holes orbiting and colliding with each other under extreme conditions. Technically difficult to model, these scenarios simulate on supercomputers highly spinning and energetic black holes with misaligned orbits. The waveforms from extreme black-hole mergers will become templates for actual gravitational wave searches and analysis. The three-year award will continue the well-established research program at RIT.

A second NSF grant for $435,000 will develop software tools to make computational astrophysics accessible to the wider scientific community and increase productivity in gravitational wave astronomy. The Einstein Toolkit—led by Campanelli at RIT—will provide a software platform of core computational tools for research focused on astrophysical systems like black holes and that require a knowledge of Einstein’s equations of general relativity.

“The idea behind the Einstein Toolkit is to create a broad and vibrant community of users and advances in the next generation of high performance computing cyberinfrastructure,” said Campanelli, a professor in RIT’s School of Mathematical Sciences and an American Physical Society Fellow.