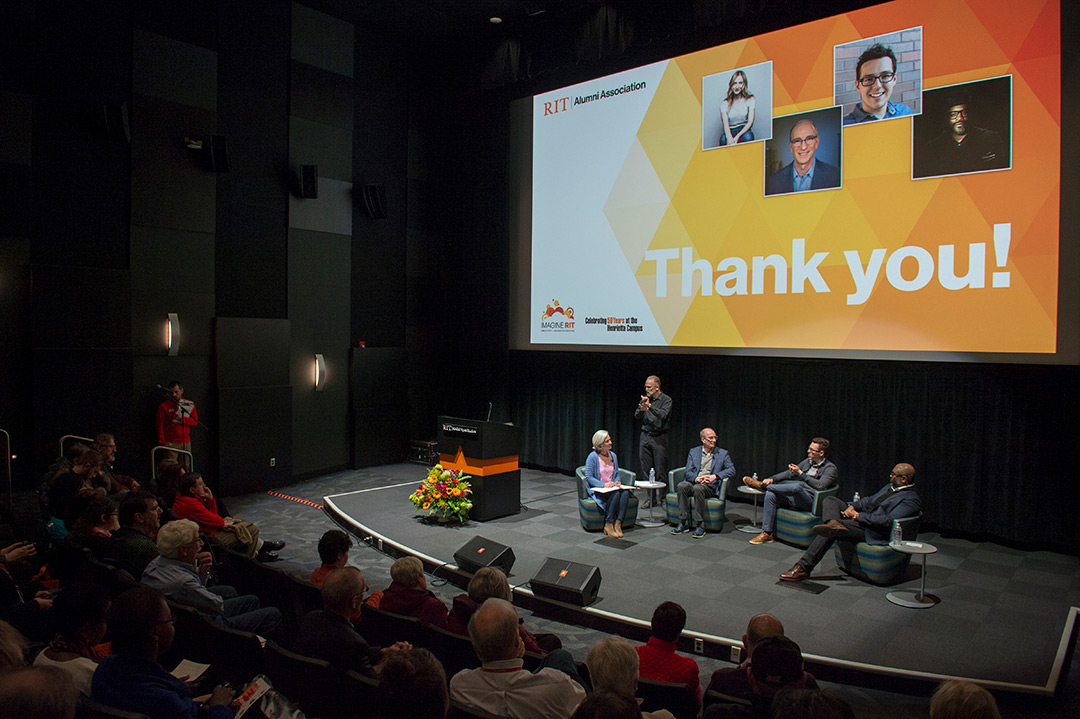 Virginia Butler, digital studio director at Rochester’s Democrat and Chronicle, moderated the “The Future of Technology, the Arts and Design,” the first-ever symposium and panel discussion of its kind held during Imagine RIT: Creativity and Innovation Festival on April 27. Joining Butler on stage were RIT’s featured presenters, from left to right, Tom Connor ’11 (film and animation), vice president of creative marketing for The Walt Disney Co.; Brandon Hudson, a fifth-year applied arts and sciences major at RIT and CEO of startup Seerwise; and Kwaku Alston, ’94 (photographic illustration), celebrity photographer. Melanie Shapiro ’07, ’08 (fine arts, MBA), founder and CEO of Token, was unable to attend the symposium due to a flight cancellation.

Renowned celebrity photographer and RIT alumnus Kwaku Alston has remained a powerful force in the imaging world by adapting to the fundamental changes affecting his craft. But through it all, including learning to shoot on both film and digital platforms, skillfully mastering still photos and motion, and accepting the surge of social media photo sharing, he has always believed that the heart of innovation comes down to having a human connection.

Alston ’94 (photographic illustration) spoke at RIT as part of “The Future of Technology, the Arts and Design,” the first-ever symposium and panel discussion of its kind held during Imagine RIT: Creativity and Innovation Festival. The April 27 symposium showcased what RIT alumni envision for next 50 years related to technology, the arts and design and how we can leverage its power for the greater good.

Joining Alston were Tom Connor ’11 (film and animation), vice president of creative marketing for The Walt Disney Co., and Brandon Hudson, a fifth-year applied arts and sciences major at RIT and CEO of startup Seerwise. Alumna Melanie Shapiro ’07, ’08 (fine arts, MBA), founder and CEO of Token, was unable to attend the symposium due to a flight cancellation. The event was moderated by Virginia Butler, former television news journalist and the digital studio director at Rochester’s Democrat and Chronicle.

RIT President David Munson welcomed the capacity crowd that gathered for the event in the Wegmans Theater inside RIT’s MAGIC Spell Studios building. “As you wander through the campus, you will discover RIT Tigers shaping the future and improving the world through creativity and innovation at the intersection of technology, the arts and design,” he said. “We put a high value on bringing goodness to the world. I want to thank our leading problem solvers and futurists for joining us today.”

In lieu of Shapiro’s presentation, the audience learned about her cutting-edge technology, Token, through a commercial that was shown. Token, an identity technology company that manufactures a biometric, encrypted ring with a fingerprint sensor with two-factor authentication, can be integrated into computer logins, mobile payments, transit cards and “smart” locks for home and auto. Token’s commercial was filmed by Optic Sky, a production company run by RIT alumnus Aaron Gordon ’13 (film and animation).

Connor, a 30-year veteran of the entertainment media marketing industry, has pioneered strategic advertising alliances with U.S. retailers including Target, Best Buy and Entertainment Weekly magazine. Prior to his work with The Walt Disney Co., Connor held high-level marketing positions at several renowned companies including Premier Retail Networks, TAG Media and Paramount Pictures Television, where he was responsible for marketing campaigns for Star Trek: The Next Generation, Frasier and Entertainment Tonight.

During his presentation, Connor stressed the importance of “making” and the value of multidisciplinary collaborations, which he believes are essential to success in today’s business environment.

“Even back when I was a student, RIT was known for its maker mentality,” he said. “We were encouraged to ‘do our thing,’ and we received support from the faculty. This hasn’t changed and is a real testament to this thought process.”

He added, “Most of the best, brightest and inspiring things in media have come out of the collision of technology and creativity. We must keep both of these things together and in balance. What happens when these come together is exciting stuff. Imagination becomes action, ideas become catalysts and dreamers become doers.”

Seerwise, Hudson’s start-up company, is transforming the energy landscape through a web-based thermostat that controls heating and cooling and offers a suite of products designed to simplify the installation and monitoring of any HVAC system while creating unique whole-home solutions.

In 2018, Hudson’s company was awarded $250,000 at New York state’s 76West Clean Energy Competition, and he became the first student selected for RIT’s Gap Year Entrepreneurship Fellows Program, which allows students with an ongoing enterprise to take a year to focus their full attention on the venture.

During his presentation, “Reshaping the Human Footprint,” Hudson said, “I was able to set out on a bold mission to change the physical spaces around us with the goal of improving the comfort, health and performance of every single building. About 40 percent of the energy that we use every single day comes from the buildings around us. From a computing perspective, that means that solving the energy challenges that our buildings face poses a wonderful opportunity to reshape humanity in the same ways that Edison and Tesla did.”

Hudson also talked about the future and our ability to reverse the damage that is caused by energy usage.

Alston ’94 (photographic illustration) is internationally known as a celebrity, advertising and journalistic photographer who has crafted memorable images for well-known publications and companies including The New York Times, Time, Essence, People, Target and Verizon. His portraits of President Barack Obama and First Lady Michelle Obama, statesman and activist Nelson Mandela, and celebrities Kim Kardashian and Jennifer Aniston highlight Alston’s unique ability to capture the expressive nuances of his subjects’ personalities.

Alston’s “flow,” or his approach to life and photography, was evident throughout his talk, “The Future of the Still Image.” He talked about his ascent to photographic fame, which began with him sleeping on the floor of his New York City apartment and literally knocking on the doors of photo editors around the city with his portfolio in hand. Today, Alston’s photo shoots take him all over the world. He has visited the White House eight times and has even produced a stop-motion short film starring Drew Barrymore.

The event concluded with a short question-and-answer session where the participants were asked to choose one word that has made a difference on their road to greatness.