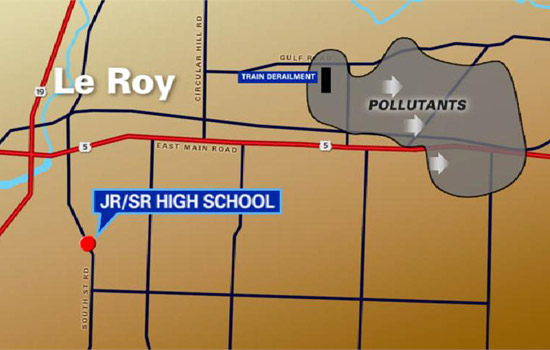 Forty years ago, a train derailment caused a chemical spill near the Le Roy Junior/Senior High School. The incident, making national headlines, was the subject of an award-winning research paper written in 2002 by RIT alumnus William Henry.

The small town of Le Roy, N.Y., has been at the center of local and national news coverage due to an unexplained outbreak of Tourette-like symptoms affecting a handful of residents. Medical experts believe the symptoms are psychiatric in nature, resulting from conversion disorder, while environmental activists like Erin Brockovich suspect that a 1970 chemical spill is a direct link to the outbreak. Experts from around the country are continuing to gather information from many sources hoping to find the answer.

William Henry, a 2003 RIT graduate in computer science with a minor in environmental studies, could be contributing his undergraduate research paper, written in 2002, to the growing list of evidence relevant to this case.

Ten years ago, Henry wrote “Out of Service: An Examination of the Political and Environmental Effects of a Toxic Spill on Water Quality in Genesee, Monroe and Livingston Counties,” as a public-policy assignment for the course History of the Environmental Sciences in the College of Liberal Arts. The research paper explained the facts surrounding the 1970 freight-train derailment that resulted in a spill of approximately one ton of cyanide “crystals” and 30,000 gallons of trichloroethylene, or TCE. Henry’s research explores the spill and initial cleanup efforts, the discovery of the extent of the contamination and the environmental testing that was done in the area. Henry lives in Caledonia, about 6 miles east of Le Roy.

“I really started paying attention to the problem in Le Roy about the time several of the students went national with their concerns,” says Henry. “When I heard that people were tying it to the 1970 spill, my first thought was, ‘They’re nuts, the spill was 40 years ago and the plume is traveling away from the school and away from the village.’ ”

Based upon his work experience as a chemical lab technician for Eastman Kodak Co., Henry says he is doubtful that there is a connection between the TCE spill and the Le Roy students’ symptoms.

“Any amount of TCE that was in the rock used as fill would be very minute,” he says. “If the rock is contaminated, there must be other locations that would have equal or higher concentrations. TCE is a well-known industrial solvent and I’ve found nothing to indicate that tics or involuntary spasms occur as a result of exposure.

“Although TCE is fairly stable, it can break down, particularly when exposed to metals,” he adds. “If there was TCE in the fill used at the school, perhaps there are trace amounts of decomposition products that should be investigated. I believe that testing of the air, ground water and the fill itself needs to be done. This testing should look for anything that might be there, not just TCE. I would also suggest testing the natural gas from the wells that the school uses.”

Henry believes that the key to solving this medical mystery lies in finding some commonality among the students and adults suffering from their symptoms.

Henry earned a Henry and Mary Kearse Student Honors Award from the College of Liberal Arts in 2003 for his work on the paper.