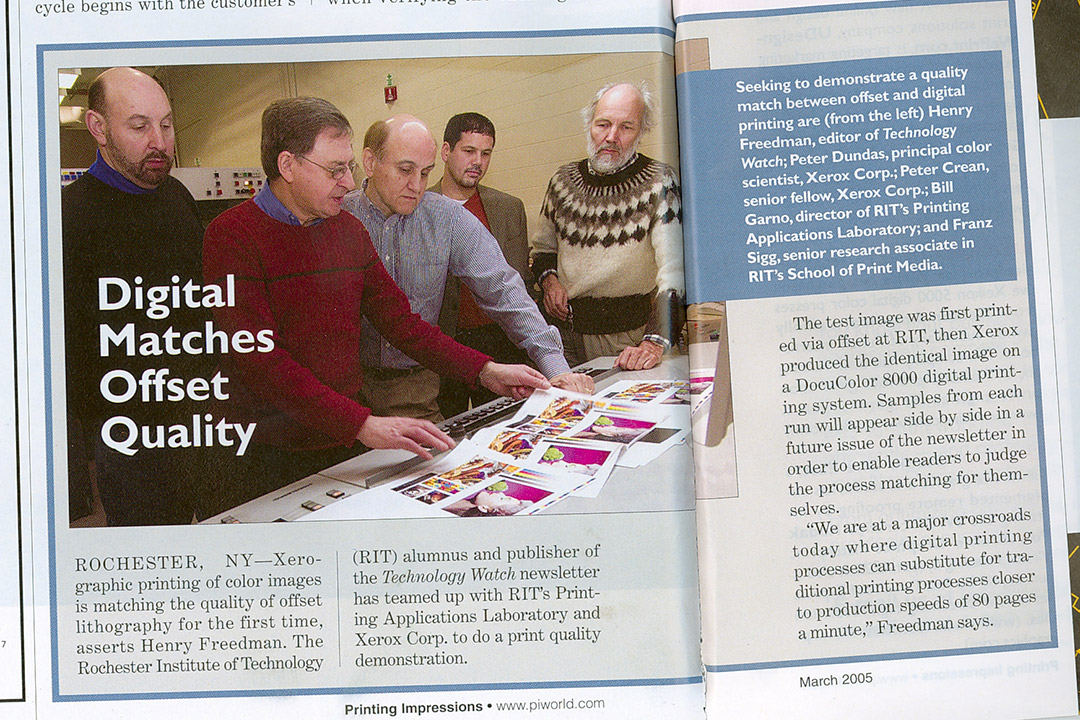 In 2005, research scientists made headlines when they began work with RIT faculty in the School of Print Media (at the time) to begin work to show that early digital presses could produce color images comparable to those done by the offset print process. The team will return to RIT to detail its success in matching and exceeding offset consistency.

The results by scientists from Image Test Labs, a regional research, testing and applications lab, were 10 years in the making and will benefit the evolving print industry by offering commercial printing companies reliable quality of images, a broader variety of paper choices for printed works and a cost-effective process.

The event is free and open to printing and imaging professionals, scientists, faculty and students.

“While the world is focused on all things digital these days, the vast majority of commercially produced printing is done by offset lithography,” said Freedman ’75 (printing and photographic sciences), founder of ITL. “As digital printing has continued to gain market share, the technology has not been able to print real ink on conventional offset paper at production speeds and with production volumes—until now.”

In 2005, Freedman, Crean and Dundas began work to show that the fledgling digital printing presses could produce color images comparable to those done by offset print process. The team looked at ways the emerging, digital technology at the time could advance to become a supplement or substitute for offset printing. Researchers were testing and validating the print technology as the industry was evolving.

Freedman developed an industry-standard methodology for evaluation of print images and process that many traditional and digital press and color copier manufacturers seek to quantify image quality and other important metrics. Freedman, Crean and Dundas were part of the 2005 team that assessed the earliest models of digital printers. In 2019, the team would be joined by Zeise to achieve this historic first.

“This is a book end; 14 years ago, Freedman, Dundas and Crean, in collaboration with RIT, began the work of demonstrating the ability of digital technology to match offset quality,” said Robert Eller, the Gravure Endowed Professor in RIT’s School of Media Sciences, co-sponsors of the colloquium. “Now the technology has grown up. We are looking at state-of-the-art digital, we are matching it on a much longer run, and the team was able to assess not only the quality of match, but the consistency of match. ITL not only matched offset quality, it found that digital beat conventional offset in terms of consistency. This is a world first. And we are back at RIT announcing the success of this effort.”

Henry Freedman is a third-generation printer whose family has owned and operated printing plants for nearly 100 years. The former for RIT Eastman Kodak Research Scholar and 3M Fellow has inventions in chemical film processing, automated print controls, print e-commerce and digital image measurement and recognized as an industry expert in imaging and print sciences, measurement and graphic arts.

Peter Dundas was on the chemical engineering faculty at MIT before joining Xerox in 1974. As a principal color scientist, he was responsible for the image quality of digital color products. He’d expand those responsibilities, training Xerox color analysts worldwide.

Peter Crean joined Xerox’s Exploratory Development Lab in the early 1970s to advance computer peripherals. He was instrumental in the development of the company’s first laser printer prototype and in advancing high resolution scanners, printer and high bandwidth electronics, among other key technologies that would become foundations for Xerox signature products from the DocuTech to iGen systems.

Eric Zeise joined the Research Laboratories at Kodak in 1981 and before retiring in 2018, he’d hold 28 patents for technologies for the Kodak and NexPress printing systems specific to technology architecture development, image quality analysis and color calibration. He also served on the ISO working group on image quality evaluation and was instrumental in the development of several image measurement standards still used today.