Exhibits, posters, speakers focus on innovations to help those with disabilities 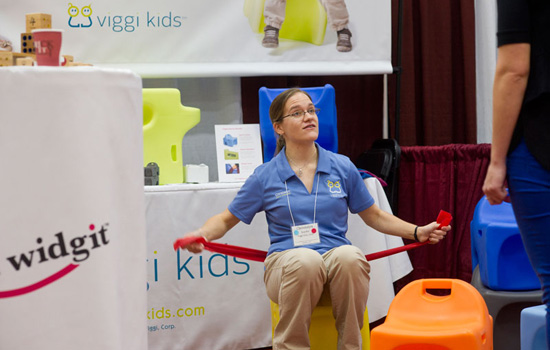 RIT’s third annual Effective Access Technology Conference, held Nov. 10 in Gordon Field House and Activities Center, brought together researchers, service providers and developers to share ideas and innovative solutions for access and inclusion. Examples of technology on the market or in development that are helping people with physical or cognitive challenges were on display. Here, Christalyn Snyder of Viggi Kids, Corp., which won the Al Sigl Award for top exhibit at the conference, demonstrated some of the company’s inventive children’s products.

Maria Shoaib, a computer science graduate student from Pakistan, believes the project she’s been working on with her team in RIT’s Machine Intelligence Lab will increase mobility for those with restricted hand movements and allow them the freedom to move about independently. It’s an effective access wheelchair fitted with multiple sensors that accepts voice commands, recognizes objects and navigates through crowded hallways.

Shoaib joined more than 50 exhibitors and poster presenters Nov. 10 at RIT’s third annual Effective Access Technology Conference, held this year in Gordon Field House and Activities Center. The event, which included keynote speakers and a product competition, brought together researchers, service providers and developers to share ideas and innovative solutions for access and inclusion, and numerous examples of technology on the market or in development that are helping people with physical or cognitive challenges were on display.

“RIT has a rich history of developing new technologies to improve access and inclusion for people of all abilities,” said Ryne Raffaelle, RIT vice president for research and associate provost. “RIT faculty and student researchers are working with a number of local service providers to support the fine work that they do. It’s very gratifying to see how RIT is positively impacting people’s lives.”

Fourth-year psychology student Lauren Harradine hopes that soon, visually impaired children and adults can enjoy the audio-centric tablet game that she has been developing for more than a year in partnership with The Association for the Blind and Visually Impaired. The game was created last year as an IdeaLab project for RIT’s Albert J. Simone Center for Student Innovation and Entrepreneurship.

Players follow audio instructions piped through headsets to maneuver through the game, swiping across and rotating the tablet screen, for example. And, according to Harradine, the game is not only geared toward those with visual impairments, but can also be used to teach critical thinking, advanced cognition and spatial awareness.

“I’ve always wanted to use alternate reality technology in advanced therapy for trauma, and this is just the beginning,” said Harradine, from Hartford, Conn. “This is the first point in the conversation of using games for something other than entertainment. And the opportunity to work with an organization like ABVI, that has so many beautiful goals, is truly validating.”

Christopher Frank, Employment and Technology Services Team Leader at ABVI, has collaborated with Xerox Corp., to help the company design an accessible solution for its multi-function printers. According to Frank, the emergence of flat-screen touch technology has made it nearly impossible for blind or visually impaired users to operate the printers. In response, Xerox used the accessibility features native to an Android tablet to provide access to all features and functions of the printer by issuing voice commands to users. The tablets are sold as separate kits that can be attached to any Xerox printer.

Greyson Watkins, a fourth-year information security student from Durham, N.C., and his team of student developers displayed their creation, Wavio, at the conference. Wavio seeks to enhance life for deaf and hard-of-hearing homeowners with a cutting-edge wireless sound recognition system that will soon be marketed across the country. Sound-capturing units plugged into outlets throughout the home are tied into a single central processing unit in the home. When a doorbell rings, smoke alarm chimes or water faucet drips, the unit notifies the homeowner via smartphone, smart watch, tablet or laptop, and identifies the sound. Virtually any sound deemed important to the homeowner can be recorded and “memorized” by the system during installation.

Keynote speakers were Peter Hayes, founder and CEO of VTCSecure, and Jim Gibbons, president and CEO of Goodwill Industries International. In his talk, Gibbons challenged conference attendees to shift their thinking from effective access technology to effective access to opportunity.

“This is the end game for the fabulous work you do at RIT,” said Gibbons, who recently served a two-year term on the White House Council for Community Solutions. “It’s not technology for technology’s sake; it’s access to opportunity. Access technology is such an instrumental part of the game plan for all of us.”

Jon Schull, an RIT research scientist and founder of e-NABLE, also demonstrated the use of 3-D printing technologies to create low-cost prostheses, and conference participants were able to assemble and manipulate 3-D printed prosthetic devices.

An award ceremony wrapped up the conference.

Taking first place in the Innovative Access Technology Product Competition sponsored by Paradigm Environmental Services Inc., was Spynalign, a device for stroke patient rehabilitation that works by placing a smartphone on a specially designed vest that alerts the patient wearing it to align and correct his or her posture.

The Al Sigl Award, presented to the event’s top exhibit, was awarded to Viggi Kids, Corp; and RIT’s National Technical Institute for the Deaf Award for best poster was given to “Development of a Wearable Biosensor for Detection of Improper Back Posture,” presented by mechanical engineering student Jared Green and Kate Gleason College of Engineering professors Elizabeth DeBartolo and Kathleen Lamkin-Kennard.

Al Sigl Community of Agencies and RIT’s National Technical Institute for the Deaf were gold sponsors of the conference. Silver sponsors were Heritage Christian Services, Arc of Monroe County, and The Albert J. Simone Center for Student Innovation and Entrepreneurship.