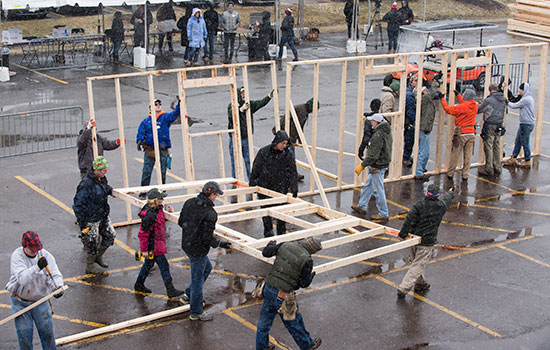 Despite temperatures in the 30s, brisk wind and snow, some 200 Rochester Institute of Technology students as well as some faculty and staff members got a warm feeling by helping others as they joined Flower City Habitat for Humanity to construct walls and frames for two homes to be erected in northwest Rochester.

The project is part of Service Week, with dozens of opportunities for students to volunteer in community services. It was organized by RIT’s Center for Leadership and Civic Engagement.

At 9 a.m., dozens of students in the first shift began hammering away, with volunteer supervisors who told them how to line up, hold and nail together the stacked lumber. Once completed, the teams walked their frames to a pile, where it would await the next stage for assembly.

“Last year, we built a shed here to be used at one of the homes,” Palmer said. “This year we really wanted to step it up, so we’re building two houses.”

Despite the less-than-perfect weather, Palmer said, “We still had a blast, and we were still able to meet our goals.”

The mission was completed by 3:30 p.m., when the frames were stacked and readied for transport to the vacant lots where the homes will be finished, at 19 Eddy St. and 91 Silver St. RIT students will be invited to help finish the homes on site before the residents move in by the end of the summer.

The Flower City chapter of Habitat for Humanity has built or remodeled 240 homes since 1984. The new homeowners, who are people who have a need for improved housing, purchase the homes after qualifying for a mortgage and agreeing to partner with Habitat for Humanity in future projects.

“These are exciting days,” said Flower City Habitat for Humanity CEO Matt Flanigan, who said RIT’s efforts will save them three weeks of construction time.

It was the first time Clarissa Xue, a third-year human-centered computing major from San Diego, volunteered with Habitat for Humanity. She hammered nails into boards and helped piece parts together.

“It was really cool to be able to build something tangible, something you can see immediately that would positively impact a family,” Xue said. “I would definitely do this again.” 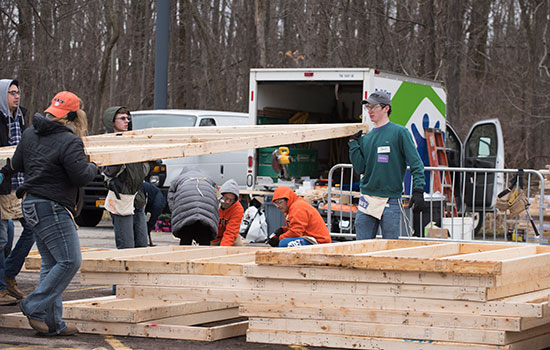 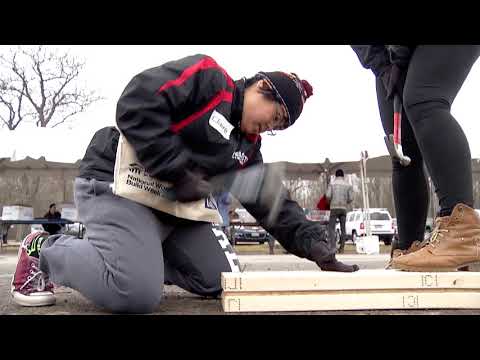