Part of a nationwide program, the first installment explores sustainability and symbiosis 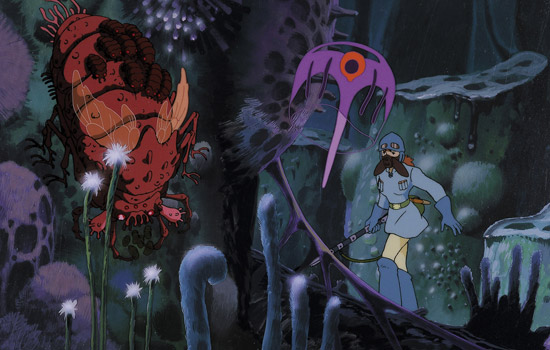 RIT and the Little Theatre kick off a three-part series exploring the connection between science and film Nov. 14 with a lecture on sustainability and symbiosis following the screening of an animated Japanese post-apocalyptic fantasy film.

Rochester Institute of Technology and the Little Theatre will kick off a three-part series exploring the connection between science and film next week with the screening of a Japanese animated post-apocalyptic fantasy film followed by a lecture on sustainability and symbiosis.

“Science on Screen” begins at 6:30 p.m. Thursday, Nov. 14, at the Little Theatre, 240 East Ave., with a screening of Nausicaä of the Valley of the Wind, a 1984 fantasy film written and directed by internationally acclaimed animator Hayao Miyazaki. The showing will be followed by a discussion co-led by Callie Babbitt, assistant professor in RIT’s Golisano Institute for Sustainability, and Greg Babbitt, professor of biology and computational genomics in the College of Science. The program is $5 for students and seniors, $8 general admission.

The series is made possible through a grant that David Long, associate professor in the College of Imaging Arts and Sciences and B.S. program chair of motion picture science in the School of Film and Animation, applied for together with officials at the Little. Early this year, the Coolidge Corner Theatre Foundation and the Alfred P. Sloan Foundation invited members of the Art House Convergence to apply for the grant, which provides support for nonprofit art house cinemas to create their own “Science on Screen” programs. It includes an award of $7,000 for start-up costs associated with launching the program. The Little was selected one of just 20 independent, nonprofit cinemas across the country to receive the grant.

Now in its ninth year, the series has expanded film and scientific literacy with the popular program. Throughout the academic year, “Science on Screen” creatively pairs screenings of classic, cult films, and documentaries with lively presentations by notable science and technology experts. Each film is used as a jumping-off point for a speaker to introduce current research or technological advances in a manner that engages popular culture audiences—from the function of the amygdalae in the zombie brains of Night of the Living Dead to how far epidemiology has come since The Andromeda Strain.

About ‘Nausicaä of the Valley of the Wind’

The film, which will be shown on a rare 35mm print, tells the story of Nausicaä, a young princess of the Valley of the Wind who gets involved in a struggle with Tolmekia, a kingdom that tries to use an ancient weapon to eradicate a jungle of mutant giant insects. Nausicaä must then stop the Tolmekians from enraging these creatures. One of Miyazaki’s first solo-directing efforts, Nausicaä is a classic environmental monster/fantasy epic with signature themes and serves as a precursor to Miyazaki’s future award-winning projects such as Spirited Away and Ponyo.

The post-film discussion will focus on human sustainability and biological symbioses—a discussion of what the film’s themes teach about the role of natural ecology in both sustaining and withstanding the pressures of humanity.