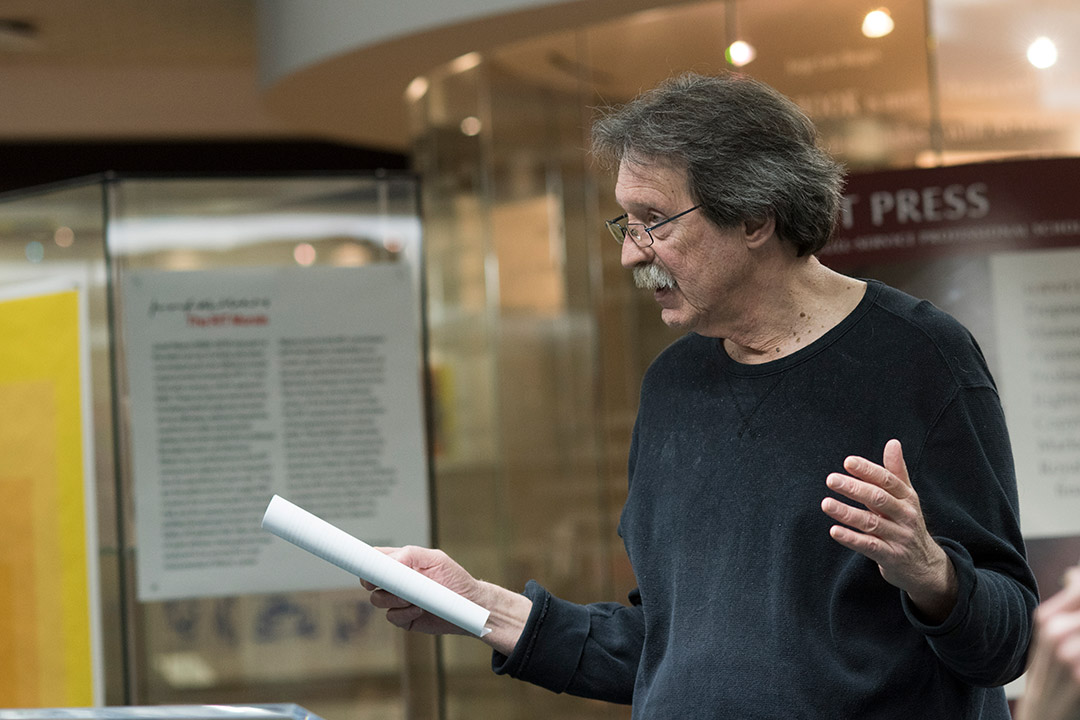 Bruce Austin, director of RIT Press, presents at a 2019 workshop on “Pitching and Publishing Your Next (or First) Book.” RIT Press turns 20 this year.

RIT Press turns 20 this year, and the future is bright for the scholarly book publisher at Rochester Institute of Technology. Expanded partnerships and community-related projects give RIT Press new momentum as it enters its third decade.

Part of RIT Libraries, RIT Press has expanded its working partnerships with scholars and institutions. It has also increased distribution of its catalogue of more than 125 titles through sales representatives covering both coasts and the Midwest, as well as Europe and Asia. RIT Press is a member of the Association of University Presses (AUP).

“The AUP, numbering more than 130, views itself as the most significant outlet for works destined to attract smaller-sized audiences by virtue of the specialized and focused content of the books published,” said Bruce Austin, RIT Press director since 2014.

From its early years, the press has embraced diverse audiences by broadening its editorial scope, Austin noted. Collaborations with scholars from RIT or other universities have led to a growing number of book series published by RIT Press. New proposals in discussion cover film history and technology, craft and social action, and subjects related to the American Arts and Crafts movement in the early 20th century. These arrangements are ideal for the small staff at the press because the editor is the subject matter expert who solicits and vets manuscripts. 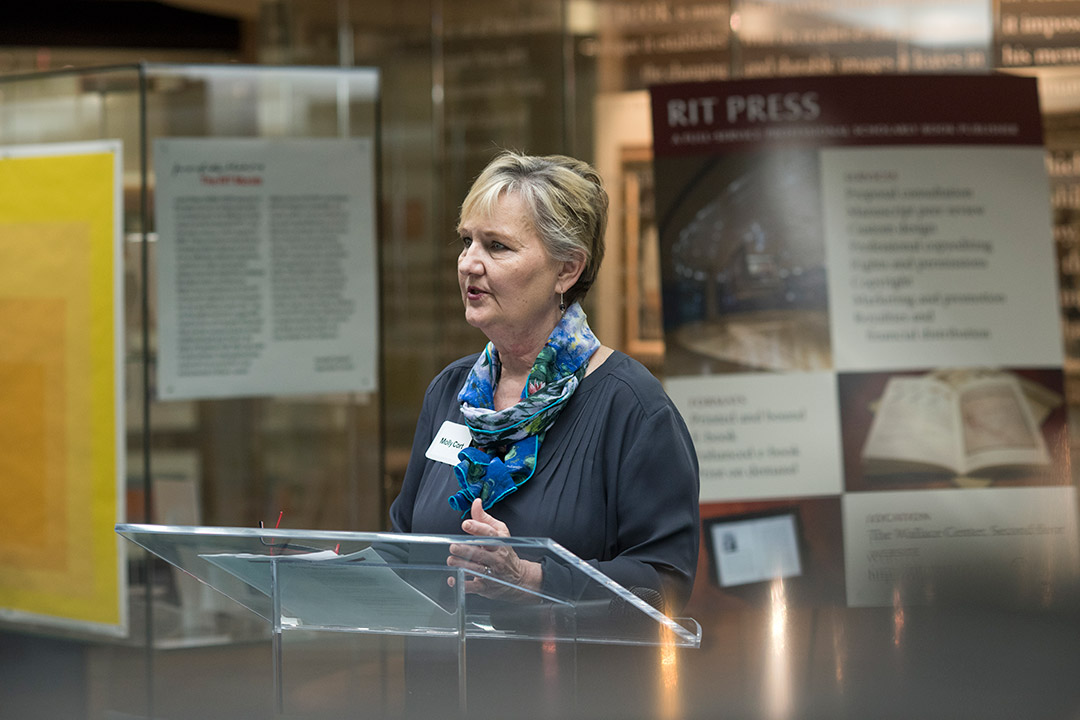 “It’s a great way to bring in new titles of quality and it enhances our relationship with faculty at RIT and at other universities,” Austin said. “Although fiction, poetry, and children’s books are outside of our editorial scope, the book series’ and their editors broaden our editorial and audience reach.”

RIT Press’ partnership with the Memorial Art Gallery produced four exhibition books which includes, most recently, Up Against the Wall: Art, Activism, and the AIDS Poster, in conjunction with the University of Rochester’s River Campus Libraries’ Department of Rare Books, Special Collections, and Preservation. 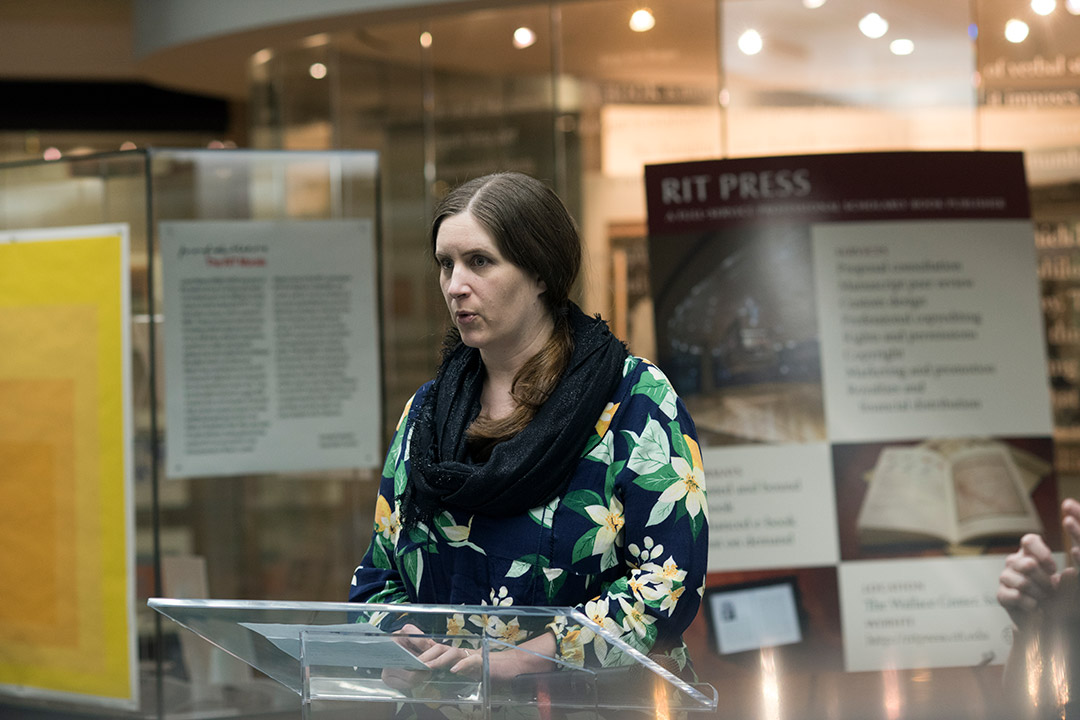 Marnie Soom is a designer and marketing specialist with RIT Press.

“The RIT Press finds multiple ways to connect with communities, including academics and scholars, trade audiences, niche reader markets,” Austin said. “We publish books and we connect through conferences and symposia, workshops, and individual consultations. In some instances, we act as distributor for work published previously, for instance. Aldous Huxley’s Words and Their Meanings or by others, such as the New York State Museum’s Art for the People.”

RIT Press is a regular contender for national awards for content and design. Most recently, Late Harvest, by Forest McMullin ’77 (photography) won the Silver Award in the Book/Fine Art category at the Arts & Sciences Prix de la Photographie Paris. Emeritus Professor Richard Lynn Shearman’s Finding Our Place in Nature: Aristotle for Environmental Scientists was a finalist for the Prose Award in the Environmental Science category.

“The works we publish and what readers hold in their hands are as instructive as they are aesthetically beautiful,” said Molly Cort ’13 (communication and media technologies), RIT Press managing editor.

The exhibition book Up Against the Wall includes images selected from a collection of 8,000 posters to highlight specific themes within the exhibit. Lead designer Marnie Soom ’02 (graphic design), ’03 MS (print media), worked with the editors to present an overview of the subject matter.

“This was a challenge for the layout and the design solution,” Cort said. “Our graphic design standards are high, and we are proud of that.”

Soom is the resident historian and staff member who bridges the early days of the press to its current operation. Her connection started in 2002 as a graduate student working in the Cary Graphic Arts Collection. Then-Cary curator David Pankow and now-associate curator Amelia Hugill-Fontanel ’02 MS (printing technology, publishing) had founded the Cary Graphic Arts Press in 2001. Soom’s work included tasks for the new press, and she was brought on as a full-time staff member in 2005. 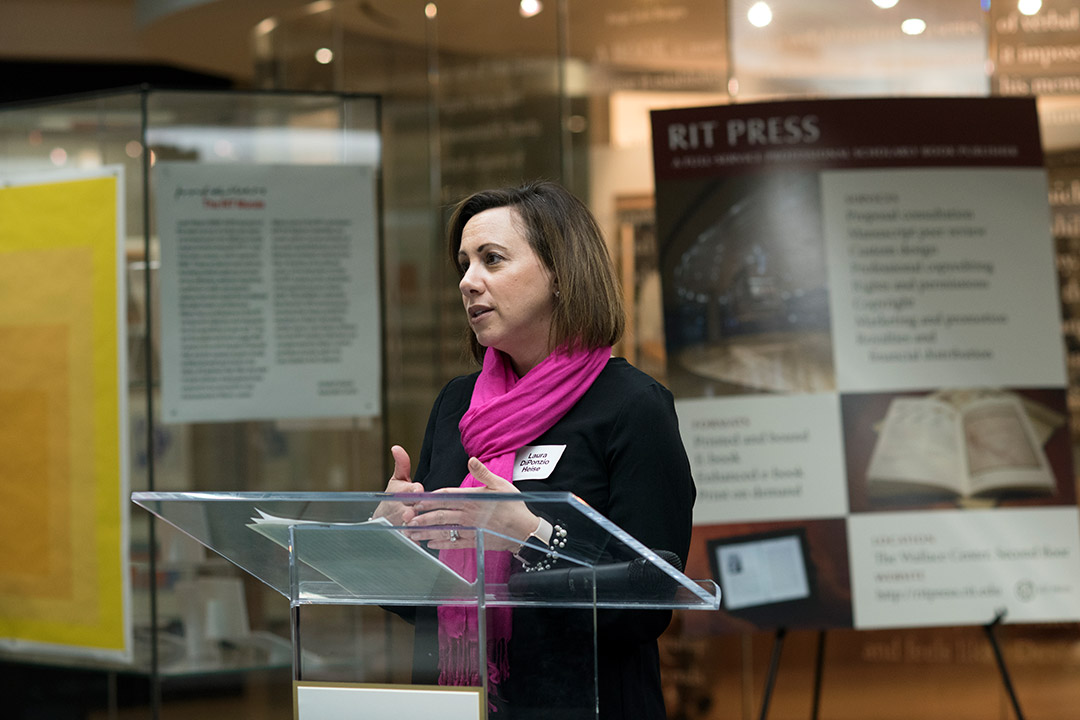 “It's been amazing to be a part of the RIT Press as it grew from one person at a desk in a workroom, to a staff of four and our own facility,” Soom said. “We have broadened our scope from graphic arts related titles to many other subjects, but our main mission has never changed. I love the process of working together to bring the author's idea to life in the best way.”

The Cary Graphic Arts Press published works on graphic communications processes, printing history, and bookmaking and, in 2007, created the RIT Press imprint for content showcasing RIT’s other strengths in applied science and technology, deaf studies, and liberal arts, for instance. During that same year, RIT Press moved outside of the Cary Collection and into the glass-enclosed office space, the Alexander S. Lawson Publishing Center, on the second floor of Wallace Library. Soom provided continuity, and the RIT Press staff grew to include Austin, Cort, and business manager Laura DiPonzio Heise ’08 MS (human resource development).

Renovations associated with the construction of the Student Hall for Exploration and Development will reconfigure Wallace Library and create access points into the new building. The new traffic pattern flowing between the library and the SHED will lend RIT Press greater visibility to the RIT community. Austin and Cort look forward to the potential synergy the location could create.

“As RIT continues to grow with new faculty and academic degrees, it gives RIT Press an opportunity to expand our title listing and professional publishing counsel to the scholarly community,” Cort said. “Our knowledge and experience can benefit anyone who asks about publishing.”