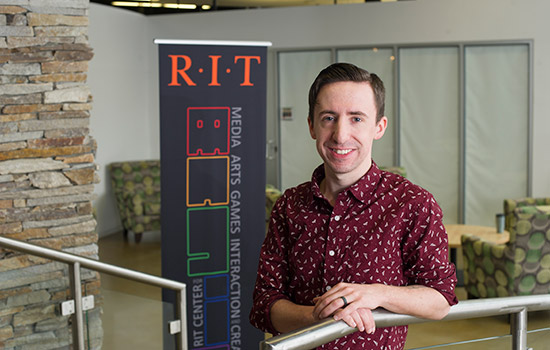 Robert Mostyn thinks of himself as a conduit, connecting game developers, programmers, designers, artists and musicians to others within the community. Through his work as the Digital Games Hub Coordinator at RIT’s MAGIC Spell Studios, he’s helping to keep talented professionals in the area and grow New York state into a focal point for game development on the East Coast.

Last year, RIT was named one of three Digital Gaming Hubs in New York by Empire State Development. The designation, which includes Rensselaer Polytechnic Institute and New York University, drew Mostyn to RIT after years in the graphic design industry and as a musician working with local game developers to add music to their digital creations. Today, he spearheads MAGIC Spell Studios’ efforts to foster innovation and collaboration resulting in the creation of new games or companies, and develops mentorship opportunities that enable students and entrepreneurs to enter the growing games industry. This spring, Mostyn was the driving force behind the first-ever New York State Game Development Challenge, a statewide competition to identify the next great game developer.

“The game design and development talent in New York state is extremely robust and will only get bigger,” Mostyn said. “The challenge was just one of ways in which we’re trying to harness and showcase this talent. It’s our job to ensure that we continue to play a defining role in boosting regional economic development, which is critical for our graduating students who are entering the workforce and for the continued success of growing game development studios in our area.”

As founder of the Rochester Game Developer meet-up group, he became a trusted source of information for those with similar interests within the local gaming community, and he enjoys networking with seasoned industry professionals and newbies, alike.

“There is a very low barrier of entry for people to get involved,” he added. “At the very least, we need to be developing conversations about our goals, our accomplishments, our challenges. I’m sure there are students or entrepreneurs out there right now who are anxious to make their own games or open their own studios. I would love to be the person who points them in the right direction. I mean, this is Rochester; this is RIT. These are places where things are happening.”

And while Mostyn admits there is much work to do, he is pleased with the progress that’s been made and the opportunity to play a role as a difference maker.

“Whenever I discover a new studio or game here in Rochester, I know that we’re heading in the right direction as a digital gaming hub and community,” he added. “And I’m so fortunate that what was once considered a hobby has evolved into my career. Isn’t that what everyone strives for?” he added.

Years at RIT: Less than a year

What I like best about working at RIT: RIT’s culture has this uncanny ability to attract and support individuals with seemingly endless amounts of passion.