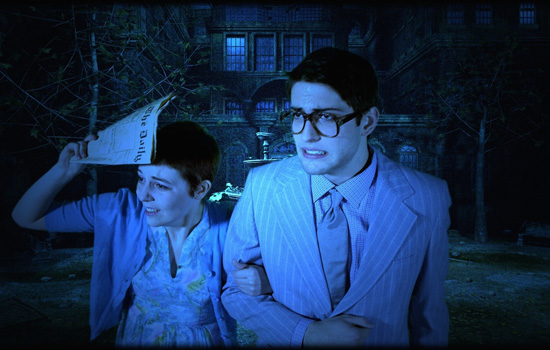 To mark the anniversary, “The Rocky Horror Show” lands on the Robert F. Panara Theatre stage at Rochester Institute of Technology with the same outrageously costumed characters, strange plot and audience participation that made the original film and stage production cult favorites.

Director David Munnell, visiting assistant professor in the department of Performing Arts and Visual Culture in RIT’s College of Liberal Arts, recalls seeing Rocky Horror as a college student in 1976, as audience members took to the aisles to dance to the “Time Warp.”

“There we saw audience members dressed up as the characters,” he said. “They talked back to the dialogue and tossed things like toilet paper, rice and playing cards at the screen. It was all very wild, weird and strange, yet the experience somehow left an indelible mark on my perceptions of society’s scorn for the marginalized, isolated and outcast.”

Munnell said audiences attending his productions aren’t going to be discouraged from shouting lines and are “encouraged to dress up and be crazy,” but ground rules will be explained in advance so flying items don’t injure people or damage the theater.

Much of the plot from the stage play and movie remains the same in his production (which isn’t suggested for children 12 and younger), but the years have allowed him to make this a multimedia production, incorporating more technology than in previous shows, with video, sound effects and remote-controlled devices.

“There are technical surprises that will appeal to the tech people here on campus,” Munnell said. “Thanks to the RIT Engineering Club who gave their support and loaned us items.”

All but one of the 14 cast members are RIT students, Munnell said, and RIT students have responsibilities in the pit band, stage crew, set design and lighting.

“RIT realizes there’s a place for performing arts that stimulates creativity,” Munnell said. “Performing arts is an important part of a liberal arts core education and adds to their college experience. We’re hoping to do more productions to make performing arts a vibrant and active part of our curriculum.”

Even though 40 years has passed since The Rocky Horror Picture Show premiered, Munnell said the message holds up for anyone who has felt strange, misunderstood and undervalued.

“Certainly I, and my theatre nerd friends, felt we were the oddballs in the microcosm of our campus universe,” Munnell said. “And I think this phenomenon is key to understanding the intense following and fandom the film has generated and maintained for more than four decades. The film and the musical have become anthems for young people who feel they don’t fit in and don’t belong. Rocky Horror reassures these people, and maybe all of us, that we don’t need to fit in, but we can find like minds in a place we belong.”

Tickets are $5 for students, seniors and alumni, $10 for faculty, staff and the public, and $3 per ticket for student groups of 10 or more. They are available at the door, or reserved at the Panara Theatre box office at 585-475-6250 or at ntidtix@rit.edu.