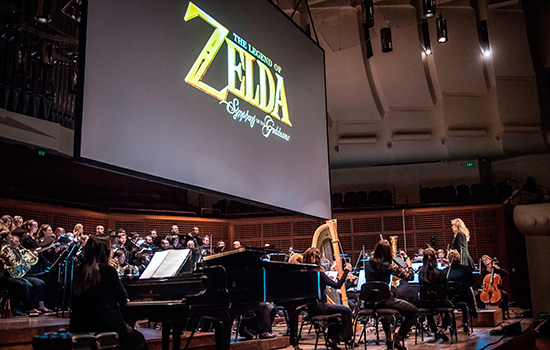 “The Legend of Zelda: Symphony of the Goddesses,” featuring music and scenes from the Legend of Zelda video game and a panel discussion afterward, is co-sponsored by RIT, RIT’s MAGIC Spell Studios and Upstate Region Interactive Technologies Hub.

The Rochester Philharmonic Orchestra will kick off its month-long schedule of fantasy-themed concerts with the “The Legend of Zelda: Symphony of the Goddesses,” at 8 p.m. Friday, Nov. 11, in Kodak Hall, Eastman Theatre. The show, which includes scenes from the popular 1980s video game projected in high definition on the big screen, is co-sponsored by Upstate Region Interactive Technologies Hub, Rochester Institute of Technology and RIT’s MAGIC Spell Studios. Cosplay (costume play) is encouraged at the performance.

Led by conductor Amy Anderson, the multimedia performance features 28 years of music from the Nintendo game series performed live by the RPO, together with Rochester chorus group Madrigalia. Following the performance, Shannon Symonds, associate curator from The Strong’s International Center for the History of Electronic Games—the concert’s promotional partner—will lead a panel discussion alongside Al Biles, professor of interactive games and media and RIT MAGIC Center affiliate, and James Zolyak, a fourth-year game design and development student at RIT, who worked on the award-winning, student-developed video game Hack, Slash & Backstab. Hack, Slash & Backstab recently became the first video game created by a university to launch on the Xbox One and Steam gaming platforms.
“The Legend of Zelda is one of the most iconic video game series ever created,” said Symonds. “Its influence can be seen in future giants of the gaming industry, such as the Final Fantasy and Metroid franchises, and its fifth installment, Ocarina of Time, is often hailed as the best video game of all time. Zelda’s important legacy made it an easy choice for induction into The Strong’s World Video Game Hall of Fame.”

Biles believes that there are several reasons the music from Zelda is so iconic. He said aside from just being “really good music,” it is integral to the game play and is initiated and performed by players as part of the game mechanics.

“When players cause the music, they really connect to it,” he said. “The music is also consistently excellent in using the audio capabilities of ever-evolving game platforms over the last 30 years. The music always maximizes what the platform can deliver and it maintains that difficult balance between being memorable and still integrating into the overall player experience. The composer, Koji Kondo, has a unique talent for writing evocative music that is central to the game but also stands alone, as the popularity of concerts like this clearly demonstrates.”

According to Jennifer Hinton, chief communications officer of RIT’s MAGIC Spell Studios, the connection among partners and affiliates like RPO and The Strong help focus attention on the local gaming industry.

“RIT’s MAGIC Spell Studios actively seeks unique and compelling opportunities to partner with community organizations to bring the power and fantasy of video games to the general public,” said Hinton. “This type of event demonstrates how RIT’s commitment to New York state’s Digital Gaming Hub is fostering innovation and creating collaborative activities that will encourage students and entrepreneurs to enter the gaming industry—an industry that is vibrant and growing as a result of the games and digital media experiences that are being created right here in Rochester by local studios like Darkwind Media, Workinman and Second Avenue Learning.”

MAGIC Spell Studios, which will officially launch with an invitation-only event at RIT Nov. 15, was created to meet the needs of the rapidly expanding digital media industry. In addition, RIT’s game design and development program was recently ranked third at the undergraduate level and seventh at the graduate level, according to the 2016 rankings from The Princeton Review.

Tickets for the concert start at $23 and are available online at the Rochester Philharmonic Orchestra website, by phone at 585-454-2100, or in person at the RPO’s new Patron Services Center (108 East Ave., Rochester) and at all Wegmans That’s T.H.E. Ticket! locations.

The 2016-17 RPO season is presented by Dawn & Jacques Lipson, The Philharmonics Series is sponsored by M&T Bank, the RPO Pops Series is sponsored by Canandaigua National Bank & Trust and Wegmans, and the OrKIDStra media sponsor is KidsOutandAbout.com. RPO performances are also made possible by the New York State Council on the Arts, with the support of Gov. Andrew Cuomo and the New York State Legislature. Additional support is provided by Monroe County, the City of Rochester, the Alfred Davis and Brunhilde Knapp Artists Performance Fund, the Mozart Performance Fund: Sarah D. Atkinson, M.D. and Steven Hess, and the Katherine T. and Jon L. Schumacher Orchestra Musician Soloist Fund.