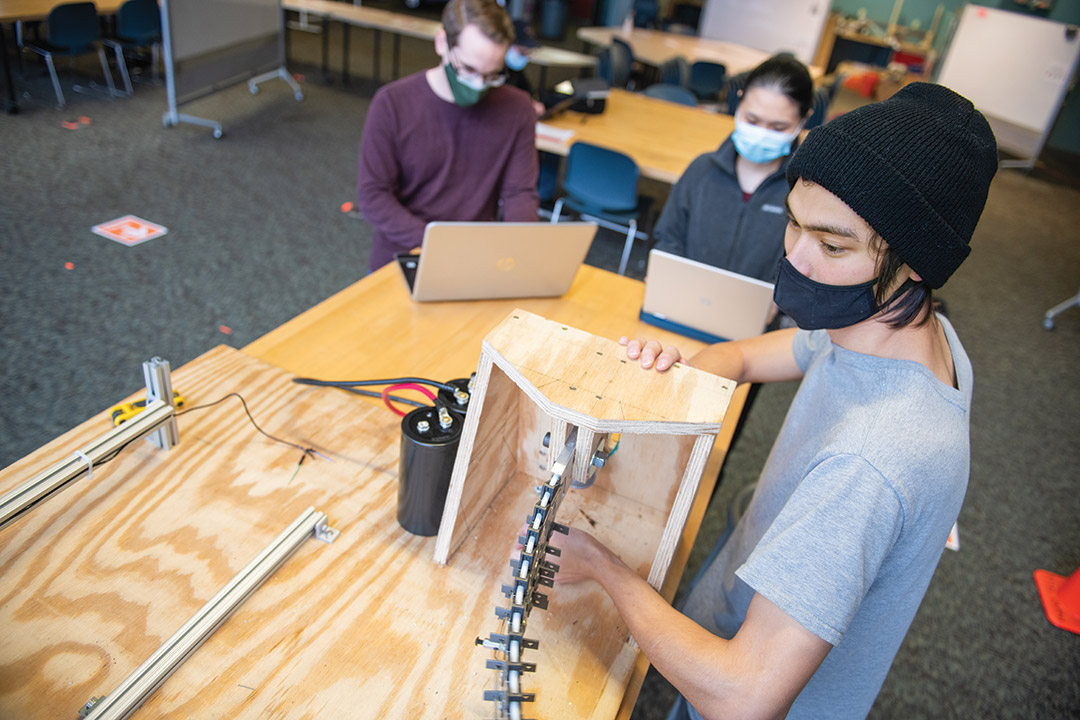 Students in RIT’s Multidisciplinary Senior Design program are building a robotic model of a dinosaur tail and sustainable water systems for developing countries.

They are developing a training system for lacrosse goalkeepers and collaborating with space engineers on rocket launches.

“These are more than ‘I’ve got an idea for nifty-widget projects,’” said Beth DeBartolo, director of Multidisciplinary Senior Design. “These projects are creating value, whether for a company, an individual in the community, or RIT. Some teams are even considering filing patent applications.”

Multidisciplinary Senior Design is a required, two semester, design-based course for engineering students. Currently, more than 400 students are working on 80-plus projects.

The course, which started in 2002 as a pilot program in engineering, today features innovative tracks such as sustainable designs, assistive technologies, and aerospace systems, and includes students from other RIT colleges.

Ideas for projects come from companies, community agencies, faculty-researchers, alumni, and the students themselves. Students returning from co-ops have initiated projects specific to work they did while at companies, and companies in turn sponsor the work.

A team can spend as many as 1,200 person-hours over two semesters developing working prototypes, ready-to-implement devices, process improvements, or system software.

“As a Kern Entrepreneurial Engineering Network (KEEN) partner school, we are committed to instilling an entrepreneurial mindset within our students,” said DeBartolo. RIT has been a part of KEEN, a national initiative to advance under­graduate engineering education, since 2019.

“This capstone experience gives our seniors a chance to showcase their curiosity and ability to make interesting connections in their work, while creating value for clients.”

Following are a few of their innovations.

When Kathleen Lamkin-Kennard, associate professor of mechanical engineering, began research work on soft muscles and actuators, she used nature as her model to produce moving robots. 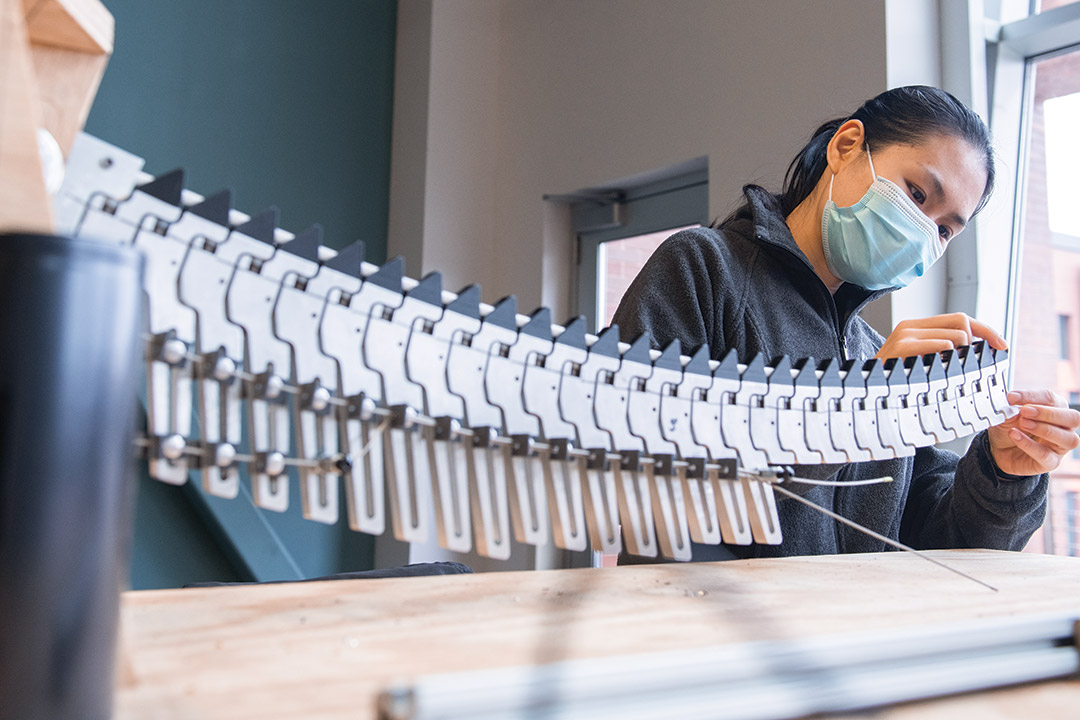 Kaiya Li adjusts the Dreadnoughtus model tail. Its 3 feet in length is scaled to align with the actual 30-foot-long tail of the dinosaur.

Over the past few years, she and her student teams have developed otters, fish, and other animal shapes to show that McKibben muscle systems can be successfully integrated into prosthetics and other biomedical devices.

This past year, she connected with a researcher at Rowan University, who is interested in applications of high-tech tools for paleontology.

Although there is much evidence about dinosaur movement based on fossils, there are no real dinosaurs to test theories. But being able to assess tail movement contributes to understanding animal biomechanics.

Lamkin-Kennard’s team built a 3-foot swinging dinosaur tail, modeled on the Dreadnoughtus, to help researchers study the way it moves through actuation models and biomechanics.

Their work supports faculty research, provides a collaboration with another university, and includes a corporate partnership with Lockheed Martin. Several of the company’s engineers are mentoring the team.

When Joseph Even came to RIT four years ago, one of the clubs he joined was the RIT Launch Initiative, and he has been involved in rocket builds and competitions ever since. 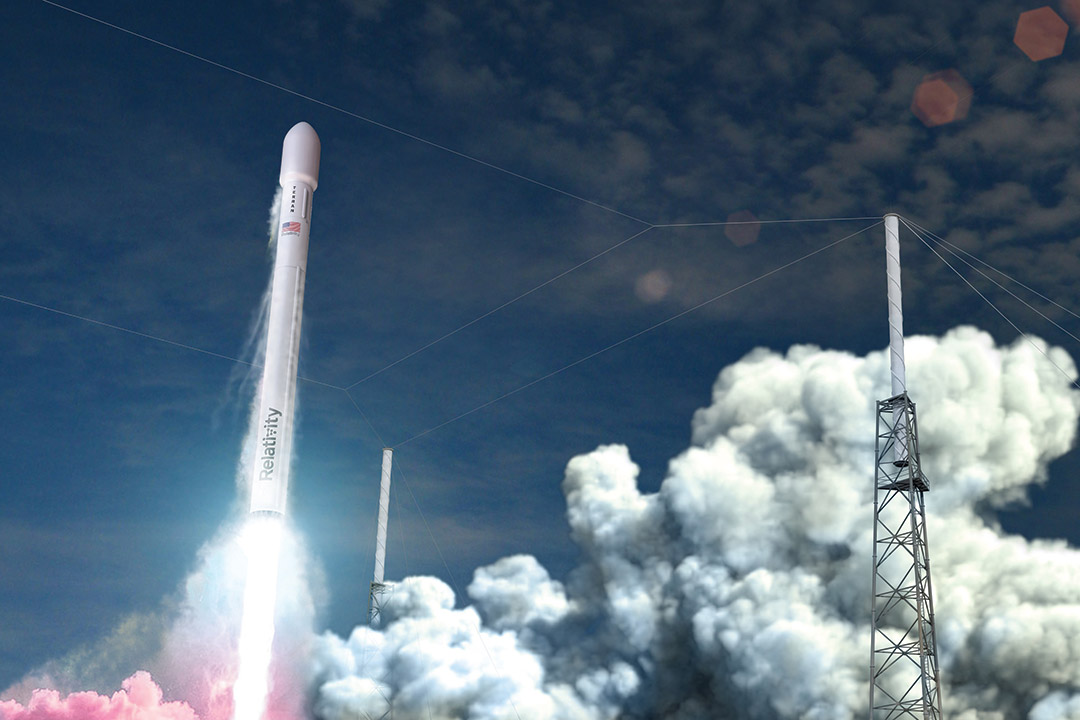 Students like Joseph Even introduce new projects for their senior design capstone based on work they did while on co-op. His team’s data acquisition system may one day be on a Relativity Space mission.

Completing a co-op with Relativity Space as an avionics intern last summer, he was part of the team that designed mixed-signal data acquisition hardware to simulate various sensors as part of Hardware-In-The-Loop for the Terran 1 rocket. The Terran 1 is one of the company’s low Earth orbit rockets that integrates 3D printing, artificial intelligence, and robotics.

Even, a fourth-year electrical engineering student from Orchard Park, N.Y., worked with Bryce Salmi ’13 (electrical engineering), someone with a similar, enthusiastic interest in space technology and travel who works for the company. Salmi’s own senior design project on a Cube Sat device eventually made it into space and is inte­grated onto current satellites to optimize power from spacecraft solar panels.

The deliverable for Even’s project is a high-speed data acquisition system, specifically designed for testing and characterizing rocket engines. Project technology developed will benefit both Relativity Space and the RIT Launch Initiative.

“I always wanted to work on the most challenging thing I could find,” said Even. “Relativity Space is doing something particularly special—3D printing rockets in their entirety. This aspect of the company adds a slew of challenges making the work that much more exciting.”

Water treatment for the developing world

Clean water is taken for granted in some parts of the world, but for other areas, the need for this valuable resource is immeasurable. 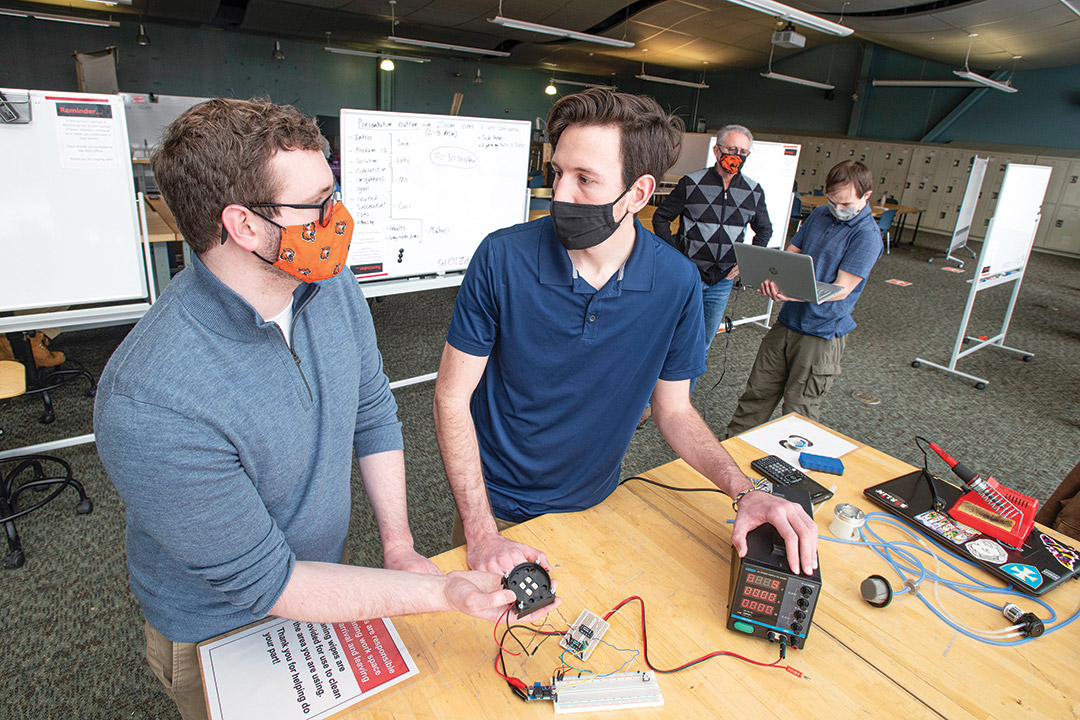 Luke Murphy and his teammates developed a prototype UV LED water disinfection system to meet this crisis. The affordable system, which they estimate at just under $50, is an easy-to-use, self-contained system expected to produce nearly 15 liters of water a day.

“Our product takes advantage of advancing UV technologies, specifically UV LEDs,” said the fifth-year industrial engineering student from Avon, Ind. “By using this technology, we are able to sanitize water with far less power required than before. This allows us to disinfect water remotely, with the use of a solar panel instead of traditional power.”

RIT’s engineering faculty members have connections with international organizations. Students also can work on projects through the college’s Engineering Grand Challenges Program and Engineers for the Developing World.

International projects have become a regular part of senior design and give students the chance to build technology for good.

The challenge for the team was not only understanding the limited resources in the developing world, but their need to understand the intricacies of UV LEDs.

“Being a new technology, there is not a significant amount of prior experience to go by when designing components to work with it. We also had to formulate our own equations to measure the disinfection rate of the system, which is important to get correct in order to prevent people from drinking unclean water.”

Defending against a ball thrown upwards of 70 miles per hour in a lacrosse game takes agility and guts. Practicing the agility part is being made easier with a training system developed to improve a goaltender’s technique when facing players in the fast-paced sport.

He and his project team are building a standing device with a shooting mechanism, similar to pitching machines used by baseball players in a batting cage. The machine would pitch balls at varying speeds and directions to a goaltender to test reflexes and techniques.

Anticipating a shot during a game means understanding range, velocity, speed—and the project team had to reverse engineer this information when building the new device.

“We had to acquire motors to move and adjust components,” Biswas said. “The positioning and shooting mechanism requires six powerful motors.”

Teknic Inc., a local engineering firm specializing in servo motors, drives, and control systems, supplied the equipment, and company engineers mentored the team in how to install and calibrate the motors.

RIT is fielding two teams this year for the PSYCHE Mission, a collaboration with Arizona State University, which is leading collegiate design work for the NASA initiative. The mission is an up-and-coming exploration of a unique metal asteroid that may help scientists understand planet formation.

RIT’s teams are working to develop a landing system that could orbit the asteroid, send sampling equipment to the surface, and return samples for eventual analysis.

“NASA believes the mission overall might give insight into how the Earth was formed,” said Beth DeBartolo, director of Multidisciplinary Senior Design. “The project provides networking opportunities for students that they might not otherwise have because part of the program includes connections to all the collegiate working teams, plus NASA personnel.”

Students have developed a tech device to help teenagers with physical disabilities play instruments. The Robo-Drum team worked with teachers and students from Niagara/Orleans Boards of Cooperative Educational Services this past year, visiting the classroom several times to meet the teens, assess physical capabilities, and develop user-friendly designs to keep the music flowing.

Students are assisting Dematic Retrotech in designing a model of a smart warehouse system. The group is looking to develop automated storage and retrieval systems and using student expertise to build a model prototype for use in trade shows and recruiting.