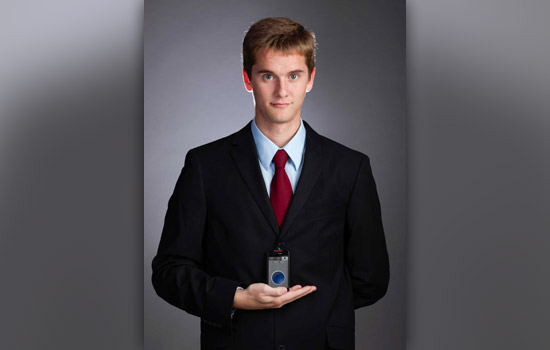 Eric Irish had an idea for a mobile application that ties campus safety features with an “anywhere blue-light” to increase the safety of a university campus. The phone app will help users easily report on-campus incidents. He pitched his idea at RIT’s 4th annual Shark Tank Competition and won for his presentation of CampusSafe. Irish is $2,000 richer and looking to expand on his app.

Question: Where are you from?
Answer: I’m from the little town of Trumansburg—near Ithaca, N.Y.

Q: Why did you decide to come to RIT?
A: I like RIT’s wholesome view of technology as both a psychology and a science.

Q: What is the coolest thing you have ever done?
A: Two summers ago I bought a red 1975 T-top Corvette. A 36-year-old car inherently has many quirks that sometimes prove to be tough to deal with. But hearing 350 cubic inches of horsepower out of dual pipes is something I would never trade.

Q: What is something that most people wouldn’t know about you when they first meet you?
A: Most people probably wouldn’t take me for the country boy that I am.

Q: What types of things are you involved in around campus?
A: I have been a resident advisor for two years and I’m an active member at the Center for Student Innovation. I also sing in Proof of Purchase, RIT’s only co-ed a cappella group.

Q: How did you get involved in the 4th annual RIT Shark Tank Competition?
A: I have seen a few in the past, since they are tied with the Center for Student Innovation. This year I knew I had an idea that would be a good fit.

Q: For those that have never been part of the RIT Shark Tank Competition, how would you describe it in one sentence?
A: You have five minutes to explain a business idea after which venture capitalists—or sharks—“ravenously” critique it.

Q: What is your favorite part about it?
A: I enjoy cutting down the idea to its bare bones for a concise, coherent presentation.

Q: What will you do with the winnings?
A: Part of it will pay for a Mac I just purchased for iPhone development and the rest will go to people who helped me along the way.

Q: Where will the idea go from here?
A: I have worked closely with RIT Public Safety and we plan to launch TigerSafe in the near future. I plan to hire a few employees to aid in refining the product into a saleable entity. Then we’ll hit the pavement to sell at other colleges.

Q: Any advice you would give to other RIT students?
A: It’s important to experience a gamut of things in college. It keeps your social scene fresh and your mind curious and creative.