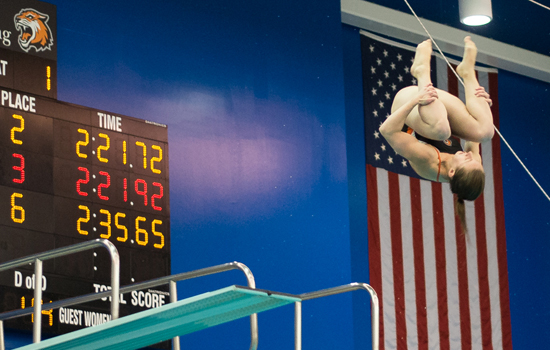 Natalie Snyder has been taking top honors at competition for dives such as this one offthe 1-meter board.

Natalie Snyder, a fourth-year biomedical sciences student from Rockville, Md., became the first RIT diver in program history to earn All-American honors, placing fifth on the 1-meter board at the 2016 NCAA Swimming and Diving Championship in Greensboro, N.C. Earlier in the season, Snyder became RIT’s first diver to win the Region 4 Championship.

Overall, Snyder won 13 of 14 events this season in the 1-meter, including the Liberty League and UNYSCSA Championships. Snyder is RIT’s record holder in both the 1-meter and 3-meter six-dive events. All the more impressive is that Snyder missed her freshman and sophomore seasons at RIT while rehabbing a torn labrum and torn triceps.

Snyder, who serves as an ambassador and tutor for RIT’s National Technical Institute for the Deaf, will graduate with a bachelor’s degree in biomedical sciences with a minor in exercise science in psychology, was a Outstanding Undergraduate Scholar in 2015 and will start graduate school in the fall at Maryland Eastern Shore with the goal of becoming a physical therapist.