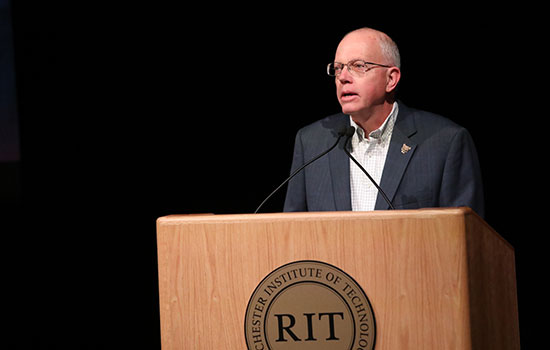 President David Munson delivered his State of the University address Oct. 20 in Ingle Auditorium as part of Brick City Homecoming & Family Weekend. Below is the text of his speech:

Good morning everyone and welcome to RIT’s Brick City Homecoming and Family Weekend. It is wonderful to have so many parents, family members, alumni, and friends joining us for this magnificent weekend.

Let me start by saying that one year ago at this time, I was the wide-eyed “freshman.” I can relate to how some of you in this room — particularly parents and first-year students — are adjusting to change and new surroundings. Let me assure you that you have found a wonderful and embracing home, just as my wife, Nancy, and I did.

You are now part of a university that puts a high value on bringing goodness to the world. We like to say at RIT that we shape the future and improve the world through creativity and innovation. We are one of the top few universities working at the intersection of technology, the arts and design. We can leverage these strengths—the core of the university—to continue building important and unique programs in all disciplines, including business, the health sciences and the liberal arts. We can lead the nation, if not the world, in taking this approach.

RIT amazes me with all the great things happening … all the time. Let me share some recent highlights:

Santosh Kurinec, professor of microelectronic engineering in the Kate Gleason College of Engineering, was inducted into the Women in Technology Hall of Fame for her breakthrough work in photovoltaics.

The RIT Baja team won the 2018 North American Series Championship, besting Michigan, Cornell and a host of others.

Alumna Lauren Peace won a prestigious Fulbright fellowship in journalism for the 2018-19 academic year, where she is conducting a journalistic research project in Kosovo.

NTID celebrated its 50th anniversary with 3,600 attendees at an event this summer. Congratulations to NTID President Gerry Buckley and his team for a great event and reunion for this milestone year.

RIT’s work to establish a diverse and inclusive environment earned two awards from national organizations this fall. For the second year in a row, RIT is being honored as an institution committed to diversity for 2018 by Minority Access, Incorporated. RIT is also receiving a Higher Education Excellence in Diversity Award from INSIGHT into Diversity magazine for the fifth consecutive year.

Student-entrepreneur Brandon Hudson is finding success thanks to original thinking and his desire to transform the energy landscape for HVAC customers. Hudson, a fourth-year student in RIT’s School of Individualized Study, and his team representing Connexus were awarded $250,000 at the 76West Clean Energy Competition, sponsored by the New York State Energy Research and Development Authority. Brandon and Connexus are working out of RIT’s business incubator, Venture Creations.

We have become an athletic powerhouse … for the right reasons! With ample successes in the classroom and on the field of play, the RIT Athletics program enjoyed tremendous success during the past season. From Liberty League Championships to NCAA berths, to All-American status, and Academic All-America plaudits, RIT’s 675 student-athletes had plenty to celebrate. And this includes an overall GPA of 3.3, with 226 athletes earning league all-academic honors

Let’s stop here and give a round of applause for all these recent accomplishments!

Let me continue with a few more examples and evidence of RIT’s ascent:

We continue to make strides in research while experiencing our best year ever of sponsored research. This includes:

Fall is always busy season on a college campus, and this year is no exception. Here’s a sample of what’s going on:

We are celebrating 50 years on this 1,300-acre flourishing campus. The move from downtown Rochester to Henrietta farmland was a bold one for President Mark Ellingson and the entire campus community in 1968. Yesterday, we had a rededication of this campus. Many alumni and friends also went back to the city to tour what remains of the old campus. It is so wonderful to see so many alumni back from that era. This moment in our history is a great time to reflect on how far we have come and also look forward. We have many more chapters to write in the evolving RIT story. As I noted yesterday at the rededication ceremony: I am convinced that we have covered only the early volumes.

All members of the RIT community are invited to stop by the Lobozzo Alumni House! The 5,700 square foot house, located on the west side of campus, is the first permanent on-campus facility built for alumni by alumni. The Lobozzo Alumni House is a comfortable and welcoming new part of RIT’s landscape and features conference space, an intimate dining room, a lovely lounge and a relaxing conservatory for all to enjoy. We have open houses running through 5 p.m. today, as well as tomorrow morning. To our distinguished alumni, let me add:  The true measure of RIT success is not just the graduation of students, but also the continued success of our alumni! Our alumni association is 125,000 strong and these Tigers blaze innovation, creativity and entrepreneurial paths around the world in all 50 states and 123 countries. Our alumni are a relatively young and up-and-coming pool of talented innovators, entrepreneurs, leaders and creative artists. About 40 percent have graduated since 2001, and nearly 20 percent having graduated since 2011. We are just getting started …

For the past 18 months, we have watched construction at the front end of the campus: MAGIC Spell Studios. We are dedicating this magnificent facility on Oct. 30. The new 52,000 square-foot building features a state-of-the-art sound stage, high-tech theater with a projection booth and a cinema-quality audiovisual system, sound mixing and color correction facilities, numerous labs and other production facilities. All of this will help support RIT’s designation as a New York State Digital Gaming Hub, and an innovation zone that mixes faculty, staff, students, technology and infrastructure across programs from the School of Film and Animation, the School of Interactive Games and Media, and the RIT Center for Media, Arts, Games, Interaction and Creativity. MAGIC has been developing and publishing digital media, such as games, apps, films, art installations and interactives since 2013, creating a collaborative, university-wide enterprise that ties together entrepreneurship, academics, content creation, production and distribution. The building and initiative are made possible through funding from New York State, Cisco, Dell, the Wegman Family Charitable Foundation, among others. If you are interested, we do have four behind-the-scenes tour of MAGIC Spell Studios after my talk and later today.

First, we publicly launched our $1 billion blended campaign, the largest fundraising effort in the university’s history. “Transforming RIT: The Campaign for Greatness” will allow us to build upon our updated strategic plan, engage alumni, grow our status as a national research university and build deeper relationships with our government and corporate partners. The Transforming RIT campaign is unique because it is blended—meaning we are seeking support from a variety of investors, including alumni and friends, government and corporate partners, and research foundations and agencies. This campaign will impact every corner of the university.

We have raised $550 million to date, and we are focused on raising funds to support four priorities:

We’ve had tremendous support in our efforts. This past December, an alumnus gave us a $50 million gift to foster entrepreneurship and cybersecurity. This gift is the largest in the university’s history and one of the largest in the region. The unprecedented gift came from 31-year-old Austin McChord, founder and CEO of Datto, a Connecticut-based data protection company with engineering and support offices in downtown Rochester. The gift is to be designated for use in two major areas:

We could not be more thankful to Austin for all that he has done for RIT and the Rochester region.

We have also launched a new brand strategy and identity that will allow RIT to start telling its story in a more compelling and cohesive fashion. Our brand will focus on a creative community and innovation in every discipline, with a dose of adventure and excitement. For our university, branding answers a fundamental question: Who and what is RIT? Having an identifiable brand will help distinguish our university from others, in the minds of prospective students and parents, colleagues at other universities, funding agencies, government officials and the general population. Our brand works by forming emotional connections from the very first interaction—a billboard in downtown Rochester, a conversation at the Imagine RIT festival, an inquiry from a potential student about NTID, or an interaction with an RIT alumna in Silicon Valley. These interactions accumulate and shape the way people think and feel about our university. When a stranger asks me what I do as president of RIT, I am going to respond: “I campaign for a university that is shaping the future and improving the world through creativity and innovation.”

A note about Rochester and the Finger Lakes Region. We have exciting examples of how RIT is helping to drive the resurgence of the regional economy. This past year, I have traveled to numerous cities, from Seattle to Dubai. At many of these stops, RIT alumni and partners have asked how Rochester is doing. This has been an easy segue, as I have spoken about Rochester’s strengths and overall vision to capitalize on creativity and innovation. Indeed, Rochester’s economic development agencies and universities are in discussions with out-of-state alumni who are eyeing Rochester to invest and expand here. Alumnus Mark Oney, who lives in Silicon Valley, has announced that his firm — EmployeeChannel — is opening its Software Development Center for Excellence in RIT’s Downtown Center for Entrepreneurship. This follows announcements from high-tech firms like Lives Tiles and Austin’s McChord’s Datto who selected Rochester for expansion for two main reasons – the ability to hire exceptional RIT talent and the vibrant downtown environment. Stay tuned for more news on this front …

Let me reinforce and conclude that RIT is an outstanding university and is only going to move upward. I think RIT is one of the top universities in the nation, but unlike any other university. We have no ambition to copy anybody else. For us, it’s all about creativity and innovation in every discipline, and in pulling down the barriers between disciplines. So, if a student is majoring in one discipline, they’ve got room in their curriculum and maybe even the motivation and certainly the interest to cross boundaries and to learn from different fields, to assemble it all together, go out and do something magnificent in the world. Because at RIT, we’re always on to something amazing!

Finally, we have a busy weekend planned for you. Enjoy yourselves at some of the signature events, including actress Mayim Bialik, best known for her roles on the television shows Blossom and The Big Bang Theory. She’s also holds a Ph.D. in neuroscience! Bialik begins speaking at 2 p.m. in the Gordon Field House.

Hockey fans: You can head over to the Gene Polisseni Center at noon to catch our women’s hockey team versus Union College. And tonight, our men’s hockey team faces off downtown against Colgate University in the Blue Cross Arena. You will see a near sell-out crowd of 10,000 loyal Tiger fans. Let’s fill the arena with a sea of Orange!

Thank you for being a part of our family and sharing this special weekend with us. We hope that you will leave here feeling a stronger connection to RIT and to each other, and remain a part of RIT for life. Thanks again and have a great weekend.