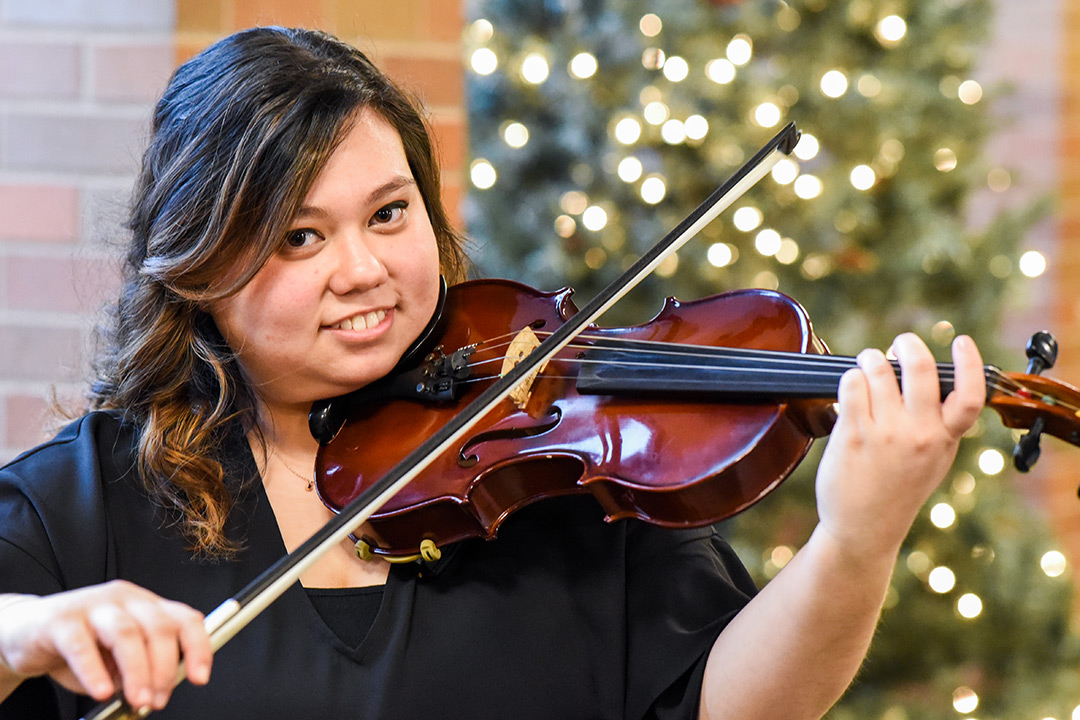 Aida Hajdarpasic has played the violin since she was in fourth grade.

Aida Hajdarpasic is passionate about artistic creativity. A fourth-year illustration student from Liverpool, N.Y., Hajdarpasic believes that art and music are just as important as the hard sciences and that anyone can be creative. From drawing to playing the violin to thinking of new stories and characters, creativity permeates through her daily work.

Hajdarpasic is a violinist who has been active in the RIT Philharmonic Orchestra for three and a half years. While she loves classical music and being a part of the orchestra, she also has an interest in video games and their soundtracks. After discovering the RIT Game Symphony Orchestra, Hajdarpasic was able to combine two of her passions, music and gaming. Now, she is on the design team for both orchestras and helps create posters to promote the concerts each orchestra holds. By stepping out of her comfort zone and exploring different opportunities, she was able to find a way to channel all of her passions into her work.

Question: When you decided to major in illustration, did you know you wanted to be a video game illustrator?
Answer: Before I applied to RIT, I wanted to be a comic artist, but, at the same time, I was also in love with video games. After trial and error, I realized that I didn’t want to pursue comic art as a career choice at the time. So, I joined RIT having gaming in mind, but I didn’t really know what exactly I wanted to do. After learning more about gaming in my spare time, I realized that there was art for video games, like concept artwork, character artwork, and the illustration ideation that goes into creating games, and, before then, I didn’t know that was a thing. So, I decided I might as well check out the illustration program. This way I could really hone in on my artistic skill and develop my work further to assist with my aspirations. I was originally going to go into game design, but I heard that it was more programming and technology based and that wasn’t really for me. I wanted to be involved with the artistic aspect of it. My interest in video games continue to inspire my own artwork and storytelling.

Question: How did you get involved with the Game Symphony Orchestra (GSO)?
Answer: About a year ago, I got an email from RIT saying that the program called Into the ROC was giving out 20 free tickets to students who wanted to go to a Rochester Philharmonic Orchestra (RPO) concert. It was featuring one of my favorite types of music, video game soundtracks. I’m a sucker for soundtracks, so I immediately jumped on that opportunity and signed myself up. I’ve been to concerts with classical music, but I had never been to an actual video game symphony. After the concert, they had a panel of people who were in charge of the event, including directors, conductors, a video game professional who worked in Japan, and Rob Mostyn, the New York State Game Challenge administrator and Digital Games Hub Coordinator at RIT. Kathryn Cilano, the assistant director for civic engagement and coordinator for Into the ROC, started talking to me and was really supportive of me and my interests. So, when I was nervous about asking a question during the panel, she encouraged me to stand up and say something. I finally stepped up and explained that I was an artist and musician who wanted to get involved with designing games and I asked how I could get started in the video game industry. Rob said that they had workshops and ROC Game Dev, and he invited me to different things and even ended up reaching out to me via email to keep me updated. After I spoke up at the panel, a student named Dean Nguyen approached me because he heard my question and told me that he and his friends had made a new group on campus called the Game Symphony Orchestra. He invited me to join them next semester and I took him up on the offer and joined the GSO.

Question: What is your favorite part about being involved with GSO?
Answer: Being able to share my love and passion for this type of music with others in an orchestral setting. Whenever I’m in orchestra, I think, ‘wow, we’re all working together and have this bond, but we don’t verbally talk to each other.’ It’s a very emotional kind of connection through a shared passion. We work through the music together and we problem solve, but also get to enjoy ourselves by playing your instrument alongside other people. It brings the community together, and not just within GSO or the Philharmonic Orchestra. It brings the people in the RIT community together when they come to enjoy our music. I don’t get a chance to know everyone’s name in either orchestras due to the amount of members, but we still work together because we are united by the music we enjoy. Having this musical connection is just… different from connections I have had with others.

Question: How does it feel knowing that you’ll be able to channel all of your passions into a feasible career?
Answer: I like to dedicate my whole self to my work and do the best that I can. Utilizing my passions every day can get tiring, but it is very rewarding. Being able to work on something that I really enjoy the most and making that into a career is just amazing. It feels great to know that you enjoy yourself while you do the work. Sometimes, it can be challenging doing it every day, but using your passions as a drive and motivation can give you a reason to get better at what you do. Of course, there are some days where it can be difficult working through the challenges, but that’s perfectly OK because that’s what makes it exciting. Challenging yourself can really prove to you your own potential. In the end, when you realize that you really love what you do and you work hard at it, it’s very self-rewarding.

Question: What is your advice to other students?
Answer: It’s OK to have interests and passions outside of your major. You should step out of that comfort zone a little bit and do something that you don’t have as much experience with and explore. Just go for it, it won’t hurt to try your best and, truly, you’ll never know what will come of it. I would have never met Dean or had that experience with Rob Mostyn if I hadn’t summoned up the courage to talk in front of the panelists. It’s very rewarding knowing that something new and interesting happened because you chose to step out of your comfort zone. Just put yourself out there, get out of your little bubble and try new things that you think you’ll enjoy. It all starts with that first step.