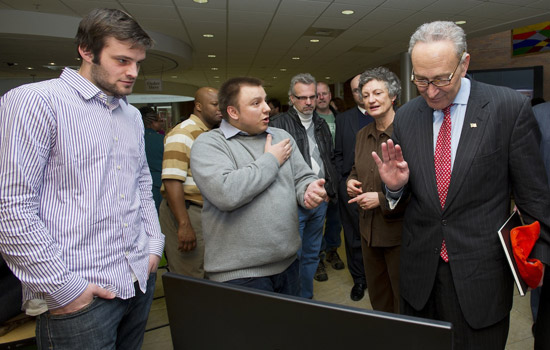 Two creators of MotionSavvy, Jordan Stemper, left, and Alex Opalka, demonstrate their prototype to U.S. Sen. Charles Schumer during a visit to RIT/NTID.

A team of students from Rochester Institute of Technology’s National Technical Institute for the Deaf has received $25,000 and acceptance into Leap Motion’s LEAP AXLR8R in San Francisco to help further their work on a program that will help deaf and hearing people communicate more easily.

The team, MotionSavvy, is developing applications for the Leap Motion 3-D sensor, which was released in July. Leap Motion recognizes the slightest hand movements. The students are developing an application that will translate a hand shape into a text letter of the alphabet in sign language.

With more work, the team plans to develop applications that will enable the device to translate sign language into words and sentences. The device could be used in retail settings or government agencies where brief personal interaction is needed.

Arvind Gupta, founder and director of the LEAP AXLR8R, said admission to the program was “extremely selective” and he was impressed by MotionSavvy’s pitch via Skype.

“I’m very excited about MotionSavvy and everything they’re trying to do,” Gupta said. “It’s people helping themselves and helping others through technology.”

Motion Savvy is one of 10 teams accepted in the program. Each team is using Leap Motion technology to develop a product or business and can benefit through technical support to help establish their business.

“We have a partnership with the Leap Motion company, giving us access to engineers that will help the team really push the development and design of what the students are doing,” Gupta said. “The teams will go and find out what its core audience is and how to match it to what the needs are.”

The classes begin Feb. 3 and conclude the first week of May, when teams will show their business products and concepts to potential investors.

“Their demonstration prototype was very impressive. I think they have the potential to make meaningful changes to the lives of deaf and hard-of-hearing people,” Gupta said. “Simple communication can be extremely difficult for them. This could enable people to have a new way of communicating with the world.”

“We’re trying to break communication barriers,” said Hait-Campbell. “That’s why I think it’s going to succeed, because a lot of people are behind it, and we’re all deaf.” He grew up with painful memories of being one of a few deaf students in his large school and not being able to fully communicate with others. “I don’t want others having to experience that.”

The students were able to work with the Leap Motion technology even before it was made public, thanks to a pre-release device secured for them by Professor Stephen Jacobs, associate director of RIT’s Center for Media, Arts, Games, Interactivity and Creativity who had connections in the company. MAGIC was the first direct funder of the team’s development efforts and also helped them get additional support from the National Science Foundation over the summer.

In the months that followed, the students have approached government agencies, area businesses and hospitals to determine whether there is interest in their product.

The team has also been out asking potential donors to invest in MotionSavvy and will apply for grants. The money will be used to expand the product for the next five years to accomplish some of the team’s goals, including expanding a sign language database with up to 20,000 signs.

“We’ll need money for research and development of the product and determining how we can improve the existing services and break into new markets,” Opalka said.