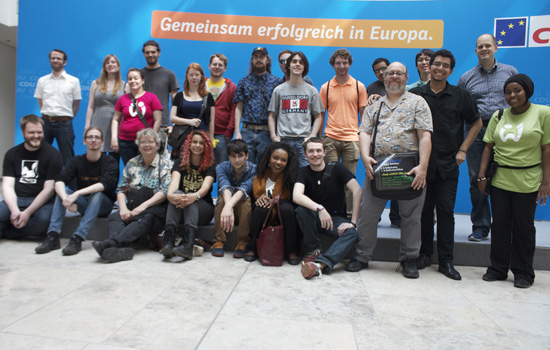 The RIT group stands at the German Christian Democratic Union building—also known as CDU, one of the largest political parties in Germany—where they met with politicians who talked about their views on video games in Germany. The two-week study abroad program introduced students to game design and development in Germany.

Fifteen Rochester Institute of Technology students kicked-off their summer vacation with a tour of the German video game industry, a world leader in free-to-play and Web video game design and development.

The two-week trip through the German cities of Paderborn, Dusseldorf and Berlin was the culmination of a spring semester course that introduced students to game design and development in Germany. For the study abroad program, students discussed game industry politics with members of the German parliament, participated in a game jam with German students and toured four game studios, including King, the creators of Candy Crush.

“My colleague at the University of Paderborn, professor Jörg Müller-Lietzkow, and I decided to do this program because the types of games most German studios develop is different than the types of games we teach our students to create at RIT and in many other programs in the United States,” said Stephen Jacobs, a professor in RIT’s School of Interactive Games and Media and an associate director of RIT’s MAGIC Center. “Jörg was able to pull together a really fabulous program for us in Germany, and we’re looking forward to the opportunity to host them in Fall 2015.”

As a part of the program, students logged their adventures in a class blog, titled the German Game Industry Class.

The program began at the University of Paderborn Gameslab, where the group got to know many of the 60 German students at the lab. They discussed the differences and similarities in their studies while attending a few lectures and collaborating in a three-day game jam. The groups had to create a video game from scratch, with the theme of “transatlantic friendship.”

“My group, which consisted of three German students and five American students, created a game called Food Friends—where the player controls multiple characters from different countries who must eat food that is not associated with them in order to stay in the game,” said Freddy Garcia, a fourth-year game design and development major who attended the trip in early June. “I hope that I have the chance to work with the students from Paderborn again because it was definitely a great experience.”

While in Paderborn, the RIT group made its way to the Heinz Nixdorf Museum, the world’s biggest computer museum. They also took a two-hour train ride to Dusseldorf to visit the studios of video game developer and publisher Ubisoft Blue Byte.

“We learned a lot about their free-to-play (F2P) business model and the technology that they use in order to keep the model profitable for their games,” Garcia said. “I also had the chance to speak with some of the developers regarding the tools they use in their games, which helps me get a better understanding of what to try to incorporate in my future projects.”

In Berlin, the group continued its tour of game studios, visiting King, Wooga and Wargaming. While at King Studios, four of the game jam teams had the chance to demonstrate their newly polished video games. After receiving some positive feedback, they were given advice on how to improve each of their games.

While in the capital of Germany, the group also visited the parliament building where they met with Thomas Jarzombek, a representative from Westphalia who is also head of the Digital Agenda and Digital Infrastructure committees, and Peter Tauber, secretary general of the Christian Democratic Union (CDU)—one of the largest political parties in Germany. The politicians discussed data protection, the “opt-in” privacy standard that Germany uses and how video game ratings are handled in their country.

“It’s interesting because games are not ‘art’ in Germany and therefore do not have the same type of protections that they do in the United States under the First Amendment,” said Jacobs. “Secretary General Tauber is looking forward to a less restrictive standard on video games in the European Union.”

The trip to Berlin also featured visits to the Computerspielemuseum, the first computer game museum in the world, and the Games Academy, the oldest German and European school dedicated to the development of video games. Students even made their way to the Berlin Zoological Garden, which presents one of the most comprehensive collections of species in the world, with 1,500 different species.

“When I graduate, I don’t want to want to limit myself by only looking for opportunities in the U.S.,” said Garcia. “This trip was a great opportunity for me to learn more about the industry and explore what it might be like to live and work in a foreign country.” 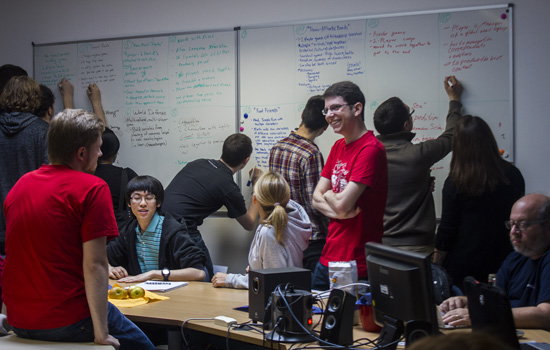 The RIT group competed in a game jam with German students from the University of Paderborn Gameslab. The teams had three days to create a mobile-friendly video game with the theme of transatlantic friendship. Freddy Garcia