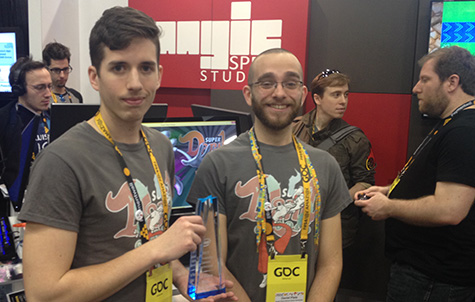 The awards were presented Thursday night (March 5, 2015) as part of the national Game Developers Conference 2015 in San Francisco.

Plate is a fourth-year illustration major and Porter is a fourth-year student majoring in game design and development. Both are from Waterloo, N.Y. Their company, Dan and Gary Games, is being incubated in MAGIC Spell Studios, and this will be the first game to be released by that company. It is expected to be published and released within a year.

“I am incredibly proud of Dan and Gary, their work ethic, passion and talent is unlike any that I have seen in a really long time,” said Jennifer Hinton, MAGIC’s assistant director. “We at MAGIC Spell Studios are thrilled to be a part of their story and are looking forward to helping them publish the game and get it in the hands of an already eager audience."

Porter said they didn't expect to win anything in the competition, let alone first place. "If you had told us a couple years ago when we started making this game that we would win an award at Game Developers Conference, we wouldn't have believed you.”

More than 100 RIT students, alumni, staff and faculty are in San Francisco this week for the conference, the world’s largest professional gaming industry event of the year.

The conference, which ended Friday, is a key learning and networking opportunity for both aspiring and professional game developers. Students attending the event had access to hundreds of lectures, panels, tutorials and discussions given throughout the week by gaming industry leaders. And GDC’s bustling expo floor featured recruiters from virtually every major gaming company, providing developers with their first look at emerging industry software and technology.

Other student games showcased at the MAGIC booth were: