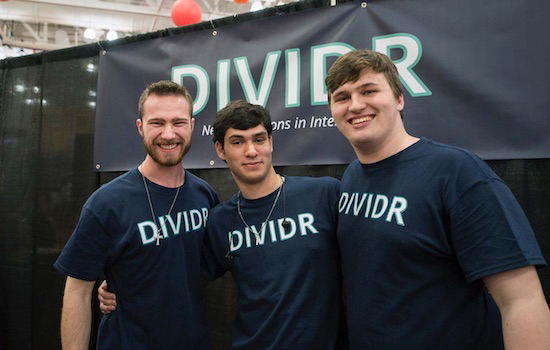 RIT students Josh Deichmann, left, Erik Lydick and Patrick Pistor received an Apple Design Award, recognizing their game Dividr, as one of the best apps of 2016.

A game developed by three Rochester Institute of Technology students has been named one of the most well-designed apps of 2016, according to Apple.

The team received a trophy and international recognition. Within a week of winning the award, downloads of the Dividr app have jumped from about 400 to nearly 12,000.

“Because Apple only gives out 12 or 13 Apple Design Awards each year, these are kind of like Oscars of iOS app development,” said Lydick. “It’s honestly just a bit fantastical—it just doesn’t seem real.”

The student team created Dividr as part of the 2016 RIT iOS App Challenge, an Apple-sponsored hackathon hosted in February at RIT. The goal of the retro 2D arcade game is to move the main player in and out to avoid obstacles on the map and collect coins along the way. You move the player by applying more or less pressure with your finger to the screen.

After winning first-place at the RIT competition, the team released the app on the App Store at the Imagine RIT: Innovation and Creativity Festival May 7. Deichmann also entered the WWDC Scholarship to win a free ticket for the week-long event for developers.

As part of the scholarship application, Apple asked that he submit an iPhone app he had previously made or a new app he was working on. Out of 350 scholarship winners, two apps were chosen by the company for a Student Apple Design Award. Deichmann attended the ceremony June 13 in San Francisco.

Writing about the award, Apple says “written entirely in Swift, Dividr uses 3D Touch variance pressure to determine how hard a player is pressing, and its simple, clean design makes this game a delight to play and worthy of winning a Student Apple Design Award.”

“3D Touch is a feature built in to the iPhone 6s and 6s Plus that allows the screen to sense how hard you press on it,” said Lydick. “Using this sensor our game divides the player’s icon to dodge obstacles a distance that is proportional to the pressure added to the screen. Basically, the harder you press on the screen, the farther your player splits apart.”

In the future, the team plans to fix any bugs and work on improving the app. They hope to one day make it to the featured front page of the App Store.

To download the free Dividr app, go to the App Store. 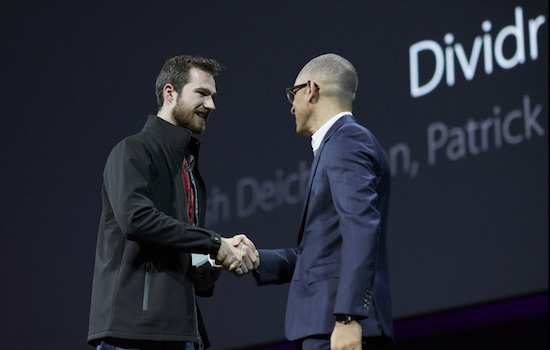