World-class ‘living lab’ rated among the top 1 percent of ‘green’ buildings in the U.S. 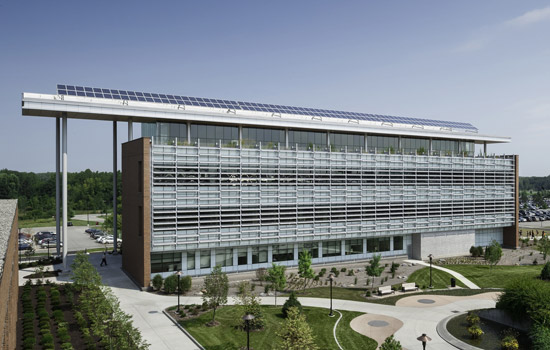 The Golisano Institute for Sustainability has earned Leadership in Energy and Environmental Design (LEED) Platinum certification from the U.S. Green Building Council — the highest standard in the rating system.

The Golisano Institute for Sustainability (GIS), a world-class “living lab” that represents Rochester Institute of Technology’s ongoing commitment to the environment, has been certified Leadership in Energy and Environmental Design (LEED®) Platinum by the U.S. Green Building Council (USGBC)—the highest standard that can be achieved in the rating system.

With a score of 80 required to achieve Platinum level, the GIS building earned 89 out of a possible 110 points from the USGBC, which named the RIT facility “exceptional” and rated it among the top 1 percent of all green buildings in the United States today.

“LEED Platinum is a significant accomplishment for our multi-story research building, particularly given that it is such an energy-intensive facility combined with our challenging climate here in Western New York,” said Nabil Nasr, associate provost and director of GIS. “We are especially proud that our building dedicated to sustainability has earned such a rare accomplishment, which required tremendous teamwork. I salute our building partners.”

The GIS building was designed by FXFOWLE in collaboration with SWBR Architects. LeChase Construction Co. served as the design-build team leader, Stantec as civil engineering consultants and M/E Engineering for mechanical/electrical/plumbing systems design.

As a result of the building’s energy-efficient systems and high-performance facades, 400kW fuel cell and the 40kW solar array, GIS is designed to be 56 percent more efficient than a standard building—exceeding the points in the LEED rating system’s “optimize energy” credit. Designed with the capacity to optimize daylight and energy savings, the facility has extensive data sensors and feedback loops where RIT will monitor and inform building operations.

“Through its control systems and micro-grid technology, the GIS building has the capacity to be one of the most informative ‘green’ buildings in the world,” said John Moore, RIT’s assistant vice president for Facilities Management Services.

Nasr added that “our faculty is utilizing the building as a teaching tool, which is central to our mission as a living laboratory for sustainability.”

Cutting-edge “green” technology has been incorporated into every inch of the 84,000-square-foot building—from the solar panels on the soaring canopy to its vertical wind turbines.

“Congratulations to the Golisano Institute on this exceptional accomplishment. This building sets new standards for green building, and is a great example for other campuses and building owners to emulate,” said John B. Rhodes, president and CEO, New York State Energy Research and Development Authority (NYSERDA). “As New York state continues to develop its clean-energy economy under Governor Cuomo, NYSERDA is proud to have been one of many partners who helped make this building an exemplary model of energy efficiency.”

According to Enid Cardinal, RIT’s senior sustainability advisor to the president, the facility’s construction was environmentally benevolent as well.

“Eighty percent of building waste generated during the GIS facility’s construction was diverted from the landfill,” Cardinal said. “As part of this project, the university’s first electric vehicle charging stations were installed and they have proven very popular on campus.”

GIS was established in 2007 with a $10 million gift from Paychex Inc. founder and philanthropist B. Thomas Golisano. RIT was awarded a $13.1 million grant by the National Institute of Standards and Technology Construction Grant Program, and $15 million in funding from the state of New York that was used toward construction of the facility and equipment.

“We commend RIT and their building partners,” said Phillip Singerman, NIST associate director for Innovation and Industry Services. “The Golisano Institute for Sustainability already discovers and demonstrates green technologies. Now they can also inspire others with this remarkable LEED Platinum research facility.”