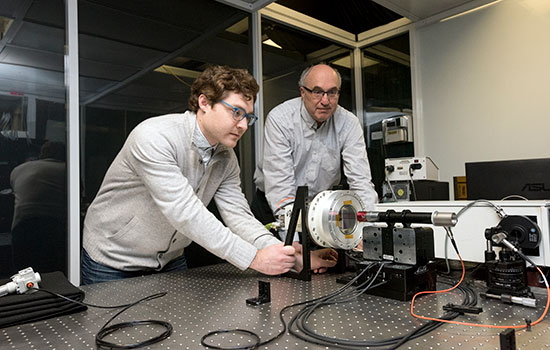 Rochester Institute of Technology researchers are developing and testing an astronomical imager inspired by an Oscar-award winning cinema projection system.

NASA is supporting Ninkov’s ongoing research on the RIT multi-object spectrometer with a $550,000 grant to recoat the Digital Micromirror Device with aluminum to increase its reflectivity and performance at ultraviolet wavelengths.

“We’ve worked extensively on space qualification for the Texas Instruments Digital Micrormirror Device and have shown the current generation of these devices is well suited to space applications,” said Ninkov, a professor in RIT’s Chester F. Carlson Center for Imaging Science. “There’s a need for a technology to allow for the rapid programmable selection of targets in a field of view that can be input to an imaging spectrometer for use in astronomy and remote sensing.”

The Texas Instruments device consists of 2048-by-1080 individual mirrors that can switch between two positions at thousands of times per second. Ninkov recognized the programmable mirrors had applications in astronomical imaging and remote sensing.

During the last decade, Ninkov’s team turned the commercial product into a scientific instrument to detect and capture astronomical data. The new technology selects targets from a two-dimensional sky field and deflects light down two distinct pathways—either to an imaging spectrometer or to an imaging array detector. The spectrometer records light at many contiguous spectral wavelengths and compresses information in the field of view into a data cube. The imaging detector array captures light signals from the objects with a charge-coupled device similar to technology found in digital cameras.