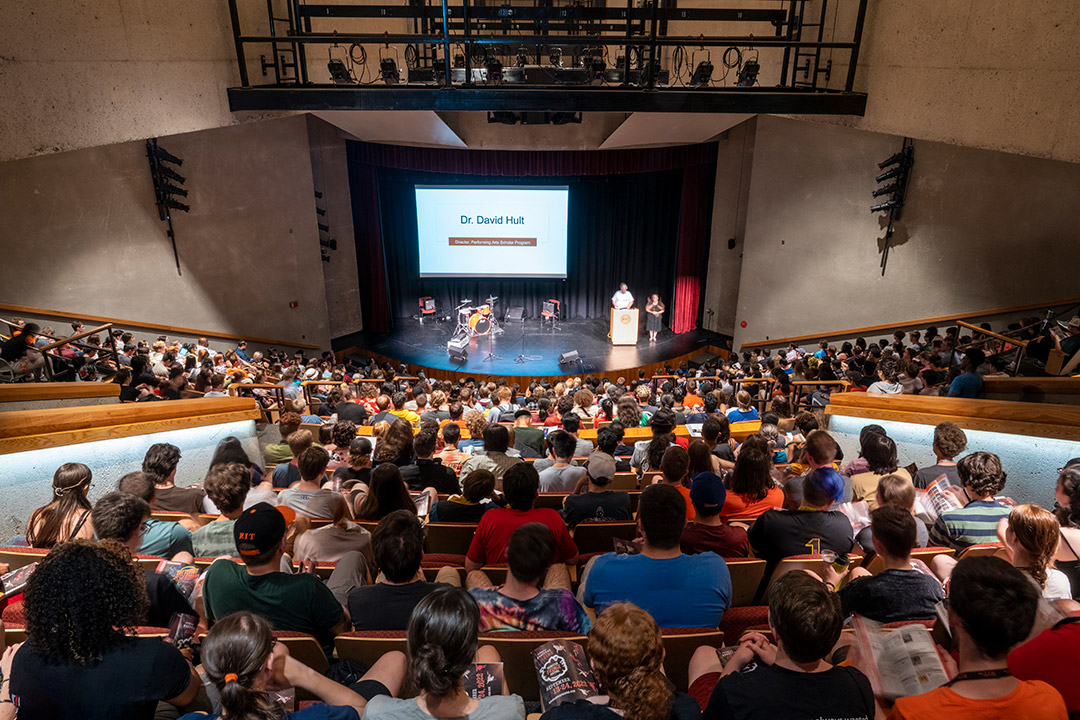 Most of this year’s 482 new Performing Arts Scholars filled Ingle Auditorium during orientation week, where they heard what they may be in store for this coming year. Nearly 1,400 current RIT students received the scholarship in the past four years.

More students involved in performing arts are currently enrolled at Rochester Institute of Technology than ever before. The latest incoming class includes a record 482 new students who received Performing Arts Scholarships.

He said the scholars share common traits: They are smart and academic achievers, inquisitive and curious, creative and imaginative, driven to succeed, do not accept failure, and are goal oriented.

“You are a team player, work well with others, and are fun to be around,” Hult told the new students during orientation week as they filled Ingle Auditorium.

Students receiving Performing Arts Scholarships must participate in a performing arts course or co-curricular activity for one full semester each year. They maintain contact with their designated coach—an RIT faculty member who is an expert in their chosen field—and submit a reflection statement each semester explaining what they did and learned.

Hult said most of the students applied for their scholarship because they wanted to save a place in their lives, and their busy academic schedules, to actively pursue their love of the performing arts.

“The Performing Arts Scholars program strives to be an incubator for you so that you can hatch your imaginations and your dreams,” Hult said.

Antonia Epps, a biochemistry major from Ellicottville, N.Y., plays some piano, but is also interested in exploring musical theater at RIT.

“I thought it would be really cool to continue doing this in college,” Epps said.

Noah Bhuiya, a computer engineering major from Springfield, Mass., wants to be involved in theater.

He said RIT’s performing arts opportunities were “a big reason” he enrolled. 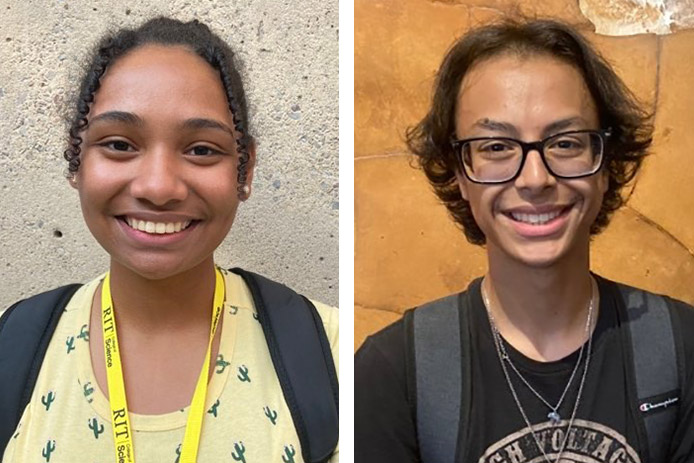 This year’s students come to RIT as the university expands even more opportunities for them. Not only do many of the students get to join some of the dozens of clubs, ensembles, productions, or orchestras at RIT, or to take private lessons for credit, they will eventually be the benefactors of new facilities being built—the Student Hall for Exploration and Development (the SHED), and the first phase of a new music performing arts theater. The new facilities will offer practice spaces and performance venues and are expected to be completed before this year’s new students graduate.

RIT’s Director of Dance Thomas Warfield said additional opportunities are likely to open soon, with the establishment of a tap dance club and figure skating lessons.

“This is just a wonderful moment of transition for all of you,” Erica Haskell told the students. Haskell is director of the School of Performing Arts, which was established this summer within RIT’s College of Liberal Arts.

“I want you to start thinking beyond your boundaries,” Haskell said. “How can performing arts pertain to the major you are pursuing?

The students may also participate in enrichment experiences, such as going to performances in downtown Rochester to watch live theater productions, concerts, or dance workshops with professional entertainers to inspire and act as role models.

“We will provide transportation and your ticket,” Hult said.

Students will also be encouraged to try a discipline other than their selected one and to participate in social events on campus whenever possible. A showcase of performing arts at RIT will be held from 4 to 6 p.m. on Nov. 18 in the Gordon Field House. All 1,388 Performing Arts Scholars from the past four years are encouraged to attend.

“This will be an opportunity for scholars to meet their peers from other disciplines, and this is your chance to perform for each other,” Hult told the students. “This is your time to showcase your talents in an informal setting and to see and hear what your fellow scholars are doing.”