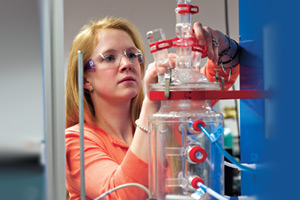 Shannon McCormick ’13 makes adjustments to an isothermal reactor in one of the state-of-the-art labs in Institute Hall, home of RIT's new chemical engineering program.

When Shannon McCormick ’13 entered RIT, she knew she wanted to be an engineer but she didn’t know what kind. McCormick sampled different engineering offerings through the Engineering Exploration Program in the Kate Gleason College of Engineering. When she learned more about chemical engineering, she was energized by the options in its wide-open field.

“I found out there are so many things you can do in chemical engineering,” she says.

McCormick was one of the first to graduate from the chemical engineering program in 2013. Last summer, she started working for Anheuser-Busch as group manager in the brewing department, supervising up to 20 operators. Her classmates also began jobs or started graduate school in a career field that aligns with national and international economic priorities in alternative energy research, nanotechnology applications and sustainability.

Steve Weinstein, head of the chemical engineering department, says RIT was in a unique position to craft a career-focused approach to chemical engineering education when the college first began to develop the new degree program. It was approved by New York state in 2008. Sixteen students were part of the first class of graduates in 2013. This year’s class is nearly double that amount, and the class of freshmen admitted in fall 2012 totals 57.

“The opportunity to build from the ground up an undergraduate curriculum in chemical engineering is rare,” Weinstein says. “Our graduates are uniquely capable of understanding how behavior at the molecular level relates to desired outcomes at the macro-scale and of developing molecular phenomena in non-traditional contexts to solve complex problems.” 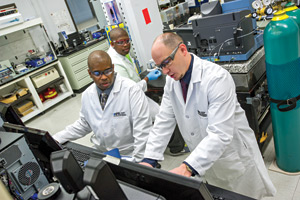 Brian Landi ’02, ’06, right, leads research in the Nanopower Research Labs in addition to teaching in the chemical engineering program. He mentored Reginald Rogers, left, who was a post-doctoral researcher in the lab, and recent chemical engineering graduate Garry Clarke. Rogers became a full-time, tenure-track faculty member in 2012 and Clarke began work in Philadelphia in June as a process engineer.

McCormick is an example of that non-traditional context. Few would associate the complex process of distilling barley and yeast with the need for the versatility chemical engineers bring to the workplace. She works with the quality assurance department to analyze beer, interpret data and decide whether the product is releasable. She also works with the facilities and distribution departments to solve operational issues that prevent or delay beer distribution.

McCormick ensures that the King of Beers stays crowned.

In the first year, the program had only three faculty members: Weinstein, Kenneth Ruschak and Harvey Palmer, dean of the Kate Gleason College of Engineering. In August 2009, Brian Landi ’02, ’06 (chemistry, microsystems) was hired. Today, there are five full-time teaching faculty and one research faculty member—plus Weinstein and Palmer, who continues to teach the introductory course for first-year students.

One of the newest additions to the faculty is Reginald Rogers. He had many opportunities to go into industry after he graduated from the University of Michigan in 2010 with his Ph.D., but he preferred working with undergraduates, mentoring them to become confident professionals.

Rogers is a story in courage. In a near- fatal car accident during his undergraduate career, he fought harder to recover than doctors had anticipated.

Perhaps it was hearing that he should settle, at best, for a two-year recovery, or at worst, being confined to a wheelchair for the rest of his life. Within five months he was walking again.

“Having gone through that crucible in my life, it helps the students understand that there are worse things out there,” says Rogers, who came to RIT through the university’s Future Faculty Career Exploration Program, a recruiting effort to establish relationships with prospective junior faculty and post- doctoral candidates. “And that to doubt themselves, when they have that mindset, they need to have some straight talk— it’s their character more than grades. I am concerned that they know how to handle themselves once they graduate.”

Rogers is among a core group of highly skilled chemical engineers and researchers hired as faculty for the program. Landi is in the forefront of developing next-generation lithium ion batteries and sustainable energy systems. Rogers worked with him in the Nanopower Research Labs in a post-doctoral position before being hired as a tenure-track faculty member.

“Our professors have worked in industry before so they know what companies are looking for from students out of college,” says McCormick.

Students can begin co-op experiences working with the faculty on their research initiatives or seek placements within the nanotechnology, pharmaceutical, alternative energy or automotive industries.

With the new chemical engineering program came the need for new co-op opportunities.

Employers from 18 states and four countries have hired chemical engineering students for co-op positions. Here are some of the companies where students have had co-op experiences:

Through his co-ops, Garry Clarke ’13 learned his way around laboratories. He worked on paint processing at research facilities at DuPont and on evaluating protective weather-coating materials for vehicles at Toyota.

“I can see where people might think of chemical engineering as basically just chemistry, but the research I was doing at RIT and these companies, even on a small scale, involved things about processes that engineers would know,” says Clarke, who is originally from New York City. “I learned a lot on co-op and it gave me a lot of experience and insight into different fields.”

Clarke took that collective experience as he began work as a process engineer at Jacobs Engineering Group in Philadelphia in June.

Ryan Foringer ’13 crossed the Atlantic for his co-op at Briggs of Burton, the international process engineering firm based in England. He lived for six months in Burton-upon-Trent, a small village in western England, and was “that American guy,” he says. His co-workers marveled at his accent and his work ethic as part of one of the engineering teams designing automated control systems for distilleries and pharmaceutical and food industries.

“We worked with larger companies, mainly breweries and distilleries like Miller, Coors, Diagio, the parent company for Smirnoff, all over Europe and Asia,” says Foringer, who is from Gaithersburg, Md. “It was a great learning experience. I want to continue to learn, maybe go on to graduate school, but I also want to find a position where I can experience different things and move around.”

While at RIT, Foringer, McCormick and Clarke were charter members of the student chapter of the American Institute of Chemical Engineers. The chapter began in 2010 with 20 students and has since tripled its membership.

They also balanced academics with athletics. McCormick, who grew up in Auburn, N.Y., played outfield on the softball team. Clarke played intramural basketball and Foringer played midfield on the men’s lacrosse team.

“We’ve set the foundation—which can also put pressure on you because we’re going to have to set the tone for what industry thinks of RIT chemical engineers,” says Foringer.

A new home for a new program

Faculty and students moved into Institute Hall, the new home of the chemical and biomedical engineering programs, in 2013.

The 86,000-square-foot building connects to the Center for Bioscience Education and Technology and is across from the IT Collaboratory and Kate Gleason College of Engineering. 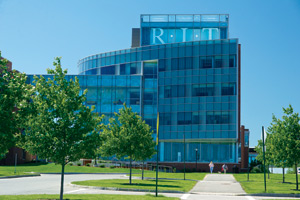 The Gleason Family Foundation has committed $3 million to the engineering school to create the Gleason Family Foundation Faculty Development Fund. The gift helps the college recruit and hire talented faculty for the newly established chemical and biomedical engineering degree programs and assists new faculty as they establish laboratory facilities and resources for student learning and research.

“Both programs were structured to address the evolving needs of our current and aspirational industry partners, to maximize the impact that our graduates can have in the marketplace,” says Harvey Palmer, dean of the Kate Gleason College of Engineering. “We in the college are humbled by the strong endorsement of the quality of our programs that is reflected in this gift from the Gleason Family Foundation and by the level of confidence that the foundation has in our ability to deliver on our vision of creating two new leading-edge, forward-thinking undergraduate programs.”

The Gleason family, its foundation and company, Gleason Corp., have been long-time supporters of RIT and the engineering college.

In 1998, the college was named after Kate Gleason, one of the first female engineering students in the nation and the first woman to be granted membership in the American Society of Mechanical Engineers.