Chris Petescia and his high school friend Mike Germano knew if their digital agency was going to be successful, they had to work in the New York City area.

They found an affordable sublease in 2008 for their company, Carrot Creative, in a former manufacturing section of Brooklyn called Dumbo (Down Under the Manhattan Bridge Overpass), which was just starting to turn over from artists’ lofts to startups.

Today, Dumbo is bursting with creative companies and Carrot has grown to more than 100 employees. Carrot’s crew creates apps, websites and digital media campaigns for companies and brands as diverse as Rolex, Target and The Nature Conservancy, and many do it using skills they learned at RIT. 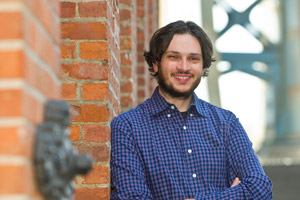 “The talent in New York was almost abysmal,” Petescia said, especially during Carrot’s early years of growth. “You think New York is ripe for that kind of stuff, but we found all these print designers who were out of work looking for jobs. We literally had to come to Rochester.”

Julian Alssid, chief workforce strategist at College for America, wrote in a blog last fall in The Huffington Post that he found a similar response when analyzing tech startups flourishing in Brooklyn.

“The logical assumption would have been that these companies were turning to local colleges and universities for great employees,” Alssid wrote. “Instead, when asking where they were finding their new talent, the nearly unanimous answer I received: Rochester Institute of Technology.”

Alssid said that it is not that there aren’t enough institutions of higher learning in the 333 miles between Rochester and Brooklyn. The firms, he said, were hiring RIT graduates because they had both the academic skills and hands-on experience needed in the startup workplace.

“At least from the perspective of the companies, no other school seemed to be preparing their students nearly as well.”

That certainly rings true for Petescia ’05 (graphic design), now the chief experience officer at Carrot. Petescia and Germano started the business using their graduation money. Germano, a Quinnipiac University graduate, handled the business side, while Petescia provided the creative power.

After a few years of working out of Germano’s basement and then a small office in Connecticut, the guys made the move to Brooklyn to be closer to potential clients. That same year, real estate collapsed, causing large companies to cut back on traditional broadcast and print campaigns and turn toward cheaper digital options.

Petescia already had experience in that space. While he was a student, he built a fan website for the Dave Matthews Band that attracted 45,000 followers. The band’s staff liked the site so much that they hired him to do freelance work. That work led to a Carrot contract with Major League Baseball to build a fan community on Facebook. The app had player and team pages, check-ins to venues, and places for fans to leave comments. This was 2008—before the social network Foursquare launched and long before Facebook was what it is today.

“None of the traditional advertising agencies knew anything about this, so we were brought in quietly behind the curtain to help ad agencies and PR firms do some social strategy and builds for their clients,” Petescia said. “They learned about digital and we learned about business.”

As their workload grew, Petescia said they were drawn to RIT’s graphic design and new media design programs, where students are graduating with a strong digital understanding and are ready to work on day one.

The company regularly attends Creative Industry Day to meet students and review portfolios. (This year, Petescia was one of 60 alumni at the event.)

Okey already had an internship with a Chicago-based agency doing more traditional print and design work when she interviewed with Carrot. But halfway through the summer, she became interested in the user experience side of the job and contacted Petescia. She was offered a position as a junior user experience designer.

“I took the job and an hour later I was like, ‘Oh my gosh, I have to move to Brooklyn.”

But she learned that unlike Manhattan, Brooklyn has a neighborhood feel where she can walk down the street and recognize people.

Brennan discovered that the hard way. She started at Carrot with an internship after she graduated and picked an apartment outside of Times Square, which she says isn’t the place where one builds a life. When it was over, Carrot offered her a full-time job but she turned it down.

She returned to Rochester to design children’s Flash games but continued to freelance for Carrot at night. By 2012, she missed being a full-time designer and decided to give the New York City area another try, but this time in Brooklyn. She became one of three RIT graduates on the four-person design team and didn’t regret the move.

“There is so much diversity in Brooklyn,” she said. “You can really find your niche. It provides a lot of opportunities.”

Carrot is located at 45 Main St., a 12-story building that is home to about 115 companies. Carrot sprawls out on the 11th floor, six floors above Small Planet where game design and development graduates Brad Bambara ’10, Dylan Longstreet ’10, Nicholas Bowlin ’11 and Taylor Plimpton ’11 work.

Gavin Fraser, the founder and CEO of Small Planet, said the company of 26 people has developed close to 70 apps since it was founded in 2009. Its clients are large corporations such as General Motors, Disney and Paramount Pictures. The four RIT graduates do both app development and make mini-games for the apps.

“They are all very highly valued employees,” Fraser said. “We couldn’t be more pleased than we are with our RIT talent.”

Bambara had done a co-op at a sister company next door called Freeverse, which recommended him to Small Planet when he was looking for work. Then Bambara recommended Bowlin for a co-op position at Small Planet.

Bowlin was offered a full-time position after he graduated, but he initially turned it down. The company offered the job to his best friend Plimpton, who also had done a co-op at Freeverse. Later that year, another opening came up and Bowlin was available.

The graduates say they wouldn’t have gotten the positions without their co-op experience. They like the work and the laid back atmosphere.

“The people here are just so awesome and the environment is great,” Plimpton said. “It almost made it feel like college at times.”

Silicon Valley of the East 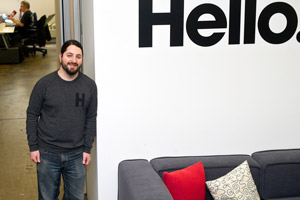 Dumbo, which sits between the Brooklyn and Manhattan bridges, has become known for its cool vibe, cobblestone streets and spectacular views of the Manhattan skyline.

The atmosphere in Brooklyn reminds Paul Farina ’02 (information technology) of Silicon Valley, where he worked for Intel right after graduation. Farina grew up on Long Island. After a year away he wanted to return to the East Coast. He did, working in New York City for large financial institutions.

Then in 2010 he saw a friend at an engagement party wearing a pin that said Huge. He asked about it, applied for an open position and was hired. Huge was then a design company but it was preparing to add a technology department to build the designs. Farina is now a technical architect.

Huge has more than 450 employees in Brooklyn and more than 2,400 worldwide. The company develops digital products for medium to large companies.

The company is sprawled out on the second floor of 45 Main St. Employees fill a big open space that lends itself to collaboration. Kitchen areas are stocked with snacks and drinks. Small dogs sleep or sit quietly next to their owners.

When Farina takes a break, he plays video games in areas set up like living rooms.

“I used to go to work at Intel in cargo shorts and sandals back when business casual was still the norm,” he said. “The companies in Brooklyn are now following suit. The atmosphere is laid back and casual but delivery focused. Company events help form stronger bonds between the employees.”

The same is true at Big Spaceship, where Chris Petrillo ’07 (new media design) has worked for eight years. When he started, the digital creative agency had about 50 employees. Today, that number has doubled. Petrillo designs apps and websites.

Like Huge, Big Spaceship has a relaxed atmosphere where pets are welcome. Petrillo even designed the company’s Foosball break room where his coworkers gather when they need to clear their heads. 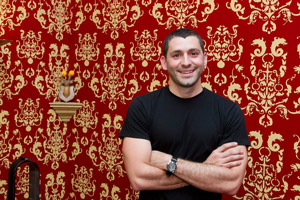 Petrillo has watched Dumbo transform into a high-tech haven and tourist attraction. He said there are so many competing companies that he has to be careful about what he talks about in the hallways and the elevators because another company in the building might be pitching for the same job.

That’s in part because of the importance startup companies are placing on the role of design. RIT students graduate with a breadth of skills—graphic design, animation, knowledge of user experience and entrepreneurship, which makes them attractive.

“It allows them to take on that multi-role aspect that a startup requires of you,” Smith said, adding that faculty members keep the curriculum relevant by talking to alumni.

Carrot, which moved into 45 Main St. in 2011 after working in an office a block away for three years, continues to grow.

In 2013, Vice Media purchased Carrot; Petescia and Germano still oversee it. That opened the door to bigger opportunities—recent clients have included Cartoon Network and Ferrari. Carrot also recently began working on a website for Malala Yousafzai, the Pakistani activist for female education and the youngest-ever Nobel Prize laureate. The website aims to inspire people worldwide to support the global education of girls.

More work means the need for more employees and space. In late spring, Carrot took over additional space on the 12th floor, and two RIT interns joined them this summer. Because of Brennan’s experience, Carrot sets them up with housing nearby. The company also loans its corporate apartment to employees so their families can visit.

The company has become its own family, celebrating holidays together and enjoying what Brooklyn has to offer after work.

“It has been so easy to hire RIT people because they know the drill. They know how to work hard. They start day one and it’s very easy to fit in,” Petescia said. “For a young person moving to the city, having a community that feels like home is really important.”