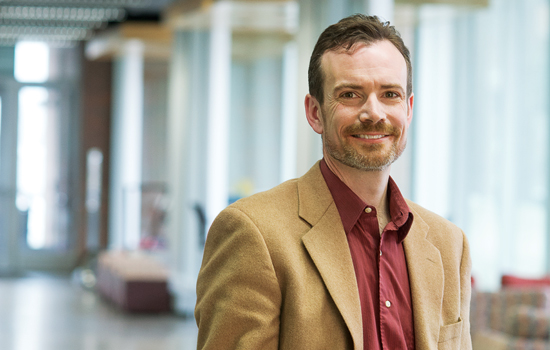 David Borkholder, the Bausch and Lomb Professor of Microsystems Engineering, is an alumnus who has made a big impact in the area of wearable technologies. Some of those life-changing solutions were designed, built and tested in engineering labs at RIT.

When Navy SEALs go out on a mission, they wear blast gauges, devices on their helmets and armor that provide information on the effect explosions could have on their bodies.

David Borkholder ’92 (microelectronic engineering) developed these wearable technologies that are being used by individuals in places as close as Rochester and as far away as Afghanistan.

In a small, out-of-the-way lab in RIT’s Kate Gleason College of Engineering, the professor, mentor and entrepreneur is teaching his students the difference between just making gadgets or widgets and making things that improve people’s lives.

“Any number of times I saw him put aside things that were probably better for him professionally, to focus on something that he felt made a difference,” said Jeff Rogers, former program manager for the Defense Advanced Research Projects Agency, DARPA, sponsors of the Blast Gauge System. “That was a wonderful scenario to watch—where he cares so much about what is going on that he will put all the time possible into making it work.”

Borkholder’s work will make an even bigger impact in the months ahead.

Each device, weighing less than an ounce, consists of several high-tech sensors and is worn in sets of three on the back of a soldier’s helmet, chest and shoulder. Data from the devices are collected and downloaded for analysis by medical personnel to correlate exposure to traumatic brain injury from IED blasts. Learn more at blastgauge.com.

The Linx Impact Assessment System consists of a 3-axis accelerometer, 3-axis gyroscope and Bluetooth Smart connectivity in a miniature package that fits into a specially designed headband or skull cap for athletes. The system provides real-time data on how hard and how many times an athlete is hit. To learn more, go to linxias.com.

The system will consist of an intricate, implantable micro-device to deliver drugs, gene therapies and other biomedical options and lead to advancements in controlled, quantitative inner-ear drug delivery for alleviating hearing loss. RIT received initial funding in February of $615,412, part of a $3 million, five-year project.

In June, his company, BlackBox Biometrics Inc., was awarded a $9.4 million U.S. Department of Defense contract to create new jobs and produce more blast gauges to support U.S. service men and women stationed throughout the world.

It was not so long ago that Borkholder was an undergraduate student himself. He began classes at RIT in 1987 when the microelectronic engineering program was just several years old and took classes from its founder, Lynn Fuller ’70, ’73 (electrical engineering). Borkholder was one of the program’s top students, with pointed questions and natural curiosity, Fuller said.

Making the leap from nippy Rochester to sunny California, Borkholder would go on to receive his master’s and doctorate in electrical engineering from Stanford University in 1994 and 1999, respectively. Part of the graduate program included various rotations with engineering faculty, and it would strengthen the intersection of engineering and biomedical applications for him. He put these disciplines to work at two start-up companies in Silicon Valley, helping to develop a portable ultrasound system for one company and automated systems for DNA extraction and analysis for the other.

Microelectronic engineering, biomedical applications and knowledge in product development would become the foundation for his research and future products.

Even with success in Silicon Valley, he and his wife, Robin, wanted to return to their hometown of Rochester and raise their two young sons among family. He had retained his connections to RIT and sought out people like Fuller to help ease into academia. He returned to RIT in 2004 to teach in the electrical engineering program and build his research focus.

“You can put your energies into making a new gadget, some commodity. It is exciting to see it on a store shelf and know you had some small part in it,” said Borkholder. “But it’s different than creating something that is going to help people. I think that’s what excited me about the biomedical aspects of engineering.”

He would put those connections to work almost immediately.

Toward 2008, the U.S. was beginning to see an upsurge of veterans returning from Iraq and Afghanistan with traumatic brain injuries. DARPA was interested in creating a soldier–worn blast dosimeter that could provide information about blast occurrences and the effect they were having on soldiers.

Borkholder submitted a concept paper about a possible solution. It became a full proposal and eventually was funded by DARPA in 2010.

In the space of one year—unusual for design, development, testing, production and deployment of any new product—Borkholder and a team of students and partners delivered 1,000 units to DARPA. They were immediately deployed in Afghanistan. 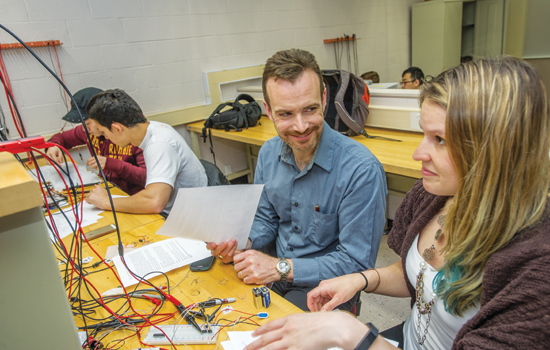 Undergraduate students such as Courtney Getman learn about using engineering to make things that improve people’s lives. She was in David Borkholder’s biomedical sensors and transducers class last spring.

“We went from concept—paper sketches of what we thought this would need to be—to actually delivering 1,000 units. And we did that in under 12 months…it was intense,” he said. “RIT was incredibly supportive through that process. I was given release from teaching so that I could focus on that and continue the other research I had going on.”

Traumatic brain injuries occur when a blast is detonated and produces a supersonic shockwave that interacts with structures—and bodies. Despite numerous casualties of war from incendiary blasts, there were thousands of soldiers who survived the blasts but later showed symptoms of damage upon return to the U.S.

Other sensor systems had been developed that primarily measured acceleration due to a blast. Additional data was needed about the overpressures with a blast, not just acceleration, Borkholder explained. Overpressure is the change in pressure relative to atmospheric pressure, and is the primary source of brain injury from explosive blast exposure.

Borkholder’s gauge logged this distinctive data, among other important variables.

“He proceeded to knock out four generations of the device in a year,” said Rogers. The former DARPA project manager is now director of engineering-healthcare technologies at Google. “The third was so good that we went ahead, packaged that up, gave it to a special operations group who flew it straight into Afghanistan.

“Six weeks later, they brought the gauges directly to DARPA and I was able to download the data from them right away. It was a very rare circumstance. Dave did an amazing job putting together so many generations so quickly. It was great engineering.”

DARPA wanted to expand use of the device. Another 1,000 units were built and shipped from RIT. The printed circuit boards were produced in Borkholder’s Biomedical Microsystems Lab in the engineering college. Once the team acquired the device packaging from an out-of-state company, the final assembly and tests were completed at RIT.

Early on in the process, Borkholder asked Fuller about testing the sensors in the gauge, and he provided him with alternatives.

Little did he know that Borkholder would build an improvised device similar to a small cannon and would set off charges on a site at the edge of campus.

“Those blasts could make the mosquitos fall out of the air,” Fuller said laughing, adding that Borkholder was asked to stop temporarily because the explosions disturbed an RIT Board of Trustees meeting going on in a nearby building.

In 2011, Borkholder created BlackBox Biometrics to manufacture the blast gauge. Today, the company, based in Rochester, has nearly 20 employees, and many have RIT degrees.

With the new Department of Defense contract, supported by Congresswoman Louise Slaughter, BlackBox Biometrics is expected to take on eight more employees to help manufacture the next generation of the Blast Gauge System to be used by the U.S. Army.

Borkholder’s young family would indirectly influence the next step in his career as he watched his sons play sports.

In 2012, BlackBox Biometrics began to diversify and believed that foundational technology within the blast gauge could be used to support growing research in the area of sports-related concussions.

“We had a core competency in measuring concussive forces with wearable technologies,” said Borkholder. “That’s essentially what the blast gauge was. So we took much of the core technology from the blast gauge, added to it and put in different form factors appropriate for sports.”

The team worked on it for over two years. In November 2014, they launched the Linx Impact Assessment System. It would be another timely connection of product-to-need, as the impact of concussions on athletes from the National Football League made the national news. 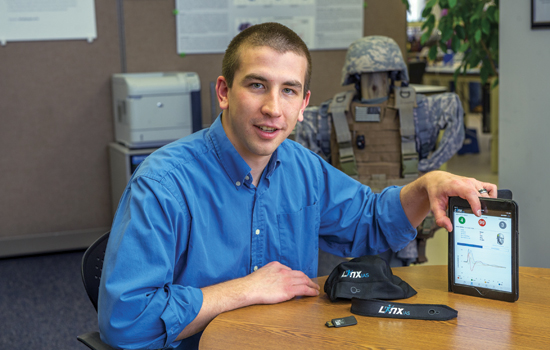 Linx IAS took the International Computer Electronics Show in Las Vegas by storm this past January. The team won three awards in Fitness, Sports and Biotech, Tech for a Better World and Wearable Technologies.

“CES was one of the craziest experiences I’ve ever had,” said Ryan Ramplin ’08 (mechanical engineering technology), lead manufacturing/mechanical engineer at BlackBox Biometrics. “I went in thinking it was a trade show, but this was a different beast with 3,500 companies and 6 million square feet of space.”

Ramplin was one of the first BlackBox Biometrics employees and worked closely with Borkholder on the latest iterations of the blast gauge.

“Working with Dave—he’s definitely high intensity, completely quality driven and has incredibly high standards—and that just helps to improve all the employees here,” he said. “The innovation process isn’t a singular line, it’s very iterative, so you can make something smaller at first but then you need to go back and re-do it because you can make it better.”

It was a similar pattern to how Borkholder made the blast gauge, with several iterations, one better and more refined than the last. Perhaps that is the mark of innovation.

“It’s funny at RIT, they kept throwing out this word ‘innovate.’ I really didn’t understand what that meant back then,” said Michael Ostertag ’11, ’13 (electrical engineering), technical lead with BlackBox Biometrics. “What Dave does, and this is one of the biggest things he’s imparted to me, is keeping abreast of new technology and trying to include as much cutting-edge technology in products.”

On the horizon for Borkholder is another cutting-edge device. This one would be even smaller than the blast gauge and the Linx IAS device—yet it might mean a big difference for someone having their hearing restored or an individual hearing for the first time.

Just over 10 years ago, when Borkholder started teaching at RIT, he began research initiatives with D. Robert Frisina, founding director of NTID, and his son, Robert, director of the Global Center for Hearing and Speech at the University of South Florida.

They received initial funding from the National Institutes of Health for developing implantable microsystems for intra-cochlear drug delivery to administer drugs or gene-based therapy treatments for auditory dysfunctions.

In February, the team was awarded a new multi-million dollar NIH grant for further developing the prototype device, because that early work demonstrated that compounds could be safely delivered to delicate areas of the cochlea in the ear.

“We hope that on the auditory side the technologies we develop will lead to advanced therapies for those who have hearing loss, and those that are in environments where they suffer from noise-induced hearing loss,” Borkholder said.

“These are life-changing things.”