A Decade of Discovery

Celebrating the 10th annual Imagine RIT on Saturday, May 6

Welcome to Imagine RIT. Are you ready to explore?

Imagine RIT: Innovation and Creativity Festival is the university’s signature event, a showcase that displays the ingenuity of students, faculty and staff. The festival is now in its 10th year and has established itself as both a campus and Rochester tradition. Nearly 270,000 visitors have attended the festival since it began in 2008.

More than 30,000 people are expected to visit the RIT campus for the event, which runs from 10 a.m. to 5 p.m., Saturday, May 6. A variety of food, entertainment and children’s activities combine to make the event a fun, family-friendly environment. Nearly 400 examples of innovation and creativity—in the form of exhibitions, demonstrations and live performances—will be on display at the free festival. 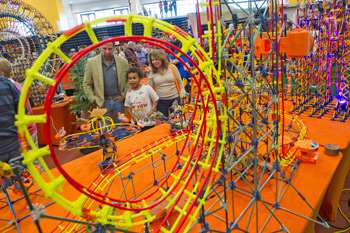 While exhibits are open from 10 a.m. to 5 p.m., the festivities kick off at 8:30 a.m. in Clark Gym with President Bill Destler’s Health Innovation Challenge. An annual part of the festival, the challenges have taken on different themes each year. This year, participants are being challenged to create something—an app or a product—that promotes healthy living.

“I was looking at the main entrance of the campus trying to see if anybody was going to show up for this thing,” said Destler, who came up with the concept for the festival as a way to showcase the talents of RIT students, faculty and staff. “None of us had any idea what the attendance would be like for that first festival. Happily enough, the attendance was pretty robust actually. It was more than we expected. It was a great relief when the day finally came and we actually had a crowd.”

Fast forward, and the festival, which drew 17,000 visitors to campus that first year, now annually attracts more than 30,000 and has taken its place as one of the most anticipated festivals in the Finger Lakes region. 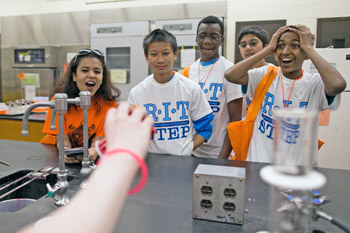 STEP students look on in surprise at an exhibit. The RIT Science and Technology Entry Program, or STEP, is a state-funded grant program that provides academic enrichment and college and career exploration to students in grades 7 - 12.

But it didn’t take long to see that the festival, which marks its 10th annual event May 6, was more than a daylong fair. Imagine RIT has evolved into a catalyst for cross-disciplinary learning and collaboration, a tool to spur enrollment, a path to employment and a launching pad that culminates in students being graded for presenting at the festival.

“There’s a tendency on all campuses for all faculty and staff and students to think that they’re the department where everything is going on, and there’s not much going on elsewhere,” said Destler, who is retiring in June after 10 years as president. “But in fact, if you go to the Imagine festival, it’s pretty obvious that there’s a huge range of creative and innovative work going on all across this campus. And it even helps people to understand where they might collaborate and find partners.”

Ryne Raffaelle, vice president for research and associate provost, said one of the biggest accomplishments of the festival’s first years was fostering a new relationship with area residents.

“We met all these people,” Raffaelle said. “Some lived across the road and said they always wondered what was going on over here, but they didn’t think they’d be welcomed. When they walked around campus and saw what was going on, they were blown away with our growth and all the research that’s going on. They were speechless. It changed our reputation in the community.”

Many of the presentations at the festival involve current research. “The faculty and students have really embraced the opportunity to show off what they do,” Raffaelle said. “It has elevated the cause for research on campus and has demystified it. Students see everybody doing cool things and say they want to do something cool, too. I see more research activity going on throughout the university because of it.” 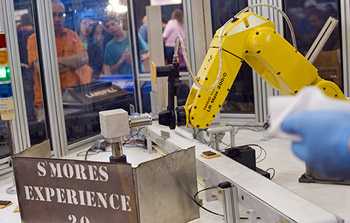 Who doesn’t love a gooey, chocolatey s’more, especially one created in front of you by a robot designed by students in the College of Applied Science and Technology and presented for consumption in a custom-designed package.

Raffaelle said the festival has also become an informal recruiting tool that prospective employers use to find skilled students for hire. “People nationally have found out about this, including our corporate partners and alumni,” he said. “They’re coming to campus to see what’s going on, and companies are shopping around and passing out their cards and saying, ‘Give me a call.’ This is a great place to find the best and the brightest.”

Another outcome of the festival is introducing the campus and programs to prospective students. In 2012, Andrea Shaver was a high school junior from Texas who happened to visit Rochester to attend the Young Entrepreneurs Academy. While in town, she decided to check out the Imagine RIT festival, got to speak with students and fell in love with “the nerdiness of the school. I loved it!” She applied, got accepted, and today is RIT’s Student Government president.

Imagine RIT Chairman Barry Culhane said the festival is also helping pave the way for successful graduates to return their “time, talents and treasure” to RIT. “It’s hard to think about that when you’re in the development stage, but once they get a few successes, they step back and say, ‘RIT has been a big part of this, and I’d like to take a step with them in moving forward,’” he said.

The festival is also a place where the culmination of students’ work throughout the year can be shown.

Duane Beck, a lecturer in RIT’s College of Applied Science and Technology, has worked with more than two dozen students on Imagine RIT projects—including the popular machine that cooked and assembled s’mores for visitors. He said senior design students worked on the exhibit as their capstone presentation. And every one of them received job offers from the industry as a result, he said.

“In the project, the students come up with the product and production idea, design the production cell, work together, develop the production cell and showcase it in front of 30,000 visitors who attend Imagine RIT,” he said. “What a great way to promote our future engineers and programs at RIT.” 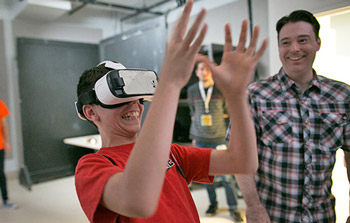 At the 2016 Imagine RIT festival, guests could don a virtual reality headset and explore work created in the Center for Media, Arts, Games, Interaction and Creativity (MAGIC).

The Chester F. Carlson Center for Imaging Science offers a class in which students design and develop a system that is unveiled at Imagine RIT—this year, the project is about virtual cinematography. The class is mostly taken by imaging science and motion picture science majors, but is open to all freshmen.

Destler said having Imagine RIT exhibits incorporated into curricula “is another example of how the germ of an idea that I proposed was taken to heart by the community and they just improved on it a thousand times. And now we have, I think, the greatest innovation festival at any university, anywhere in the country.”

The 10th annual Imagine RIT: Innovation and Creativity Festival is Saturday, May 6. While exhibits are open from 10 a.m. to 5 p.m., the festivities kick off at 8:30 a.m. in Clark Gym with Dr. Destler’s Health Innovation Challenge.

An annual part of the festival, the challenges have taken on different themes each year. This year, participants are being challenged to create something—an app or a product—that promotes healthy living.

To learn more about the festival and the challenge, go to rit.edu/imagine.