The future of design research at Rochester Institute of Technology is boundless. Now one of the top universities in the nation working at the intersection of technology, the arts, and design, RIT’s design programs assert global influence.

From Beaux-Arts to Modernism

Designers thrive when they have a working concept of what makes people tick, a context that allows them to shape their ideas by considering what people covet and use—along with a place to focus all of their creative energy.

What provides the fuel for such new ideas? Research. 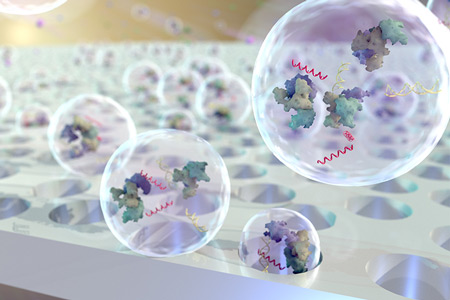 Design research emerged as a recognizable field of study at RIT and elsewhere in the 1960s.  “When I first came to RIT in 1963, it was largely a beaux-arts school,” said R. Roger Remington, RIT’s Vignelli Distinguished Professor of Design, referring to the classical decorative style and influences of Paris from the early to mid-1900s. “The change from a fine arts school into one of modernist design precipitated the dramatic shift from analog to digital and the advent of more intensive research here.”

In 1983, Remington, the author of six books on the history of graphic design with two more in the works for 2018, organized “Coming of Age,” the first-ever international symposium on the history of design, with a particular focus on graphic design. From those early roots, RIT has become a world leader in emphasizing the history, theory, and criticism in design education and research, including the acquisition of nearly 50 archives of design’s modern masters.

No other school or institution of any kind can offer such extensive opportunities to learn and research from actual artifacts, rather than reproductions, Remington observed. 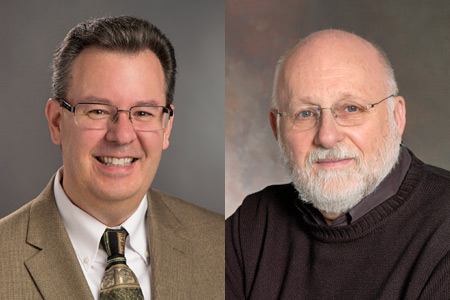 “Design has always had this focus on applying research as part of the visual language and the visual dialogue that we’re creating,” said Adam Smith, chair of the new media design program and graduate director of Visual Communication Design. “Fifteen years ago, design—especially interactive design—was very ad hoc. Here at RIT and elsewhere, designers were exploring new and different ways of using technology to present information, so in a way early design was a form of research. What we lacked, however, in the early days, was the ability to necessarily understand how to leverage the power of the research methodologies. There’s a method to analyze, to record and evaluate design research and build those improvements off of it.”

One benefit of the huge explosion in design over the last two decades is that it has enabled designers to refine and hone ideas based on usability, usefulness, and functionality, according to Smith.

“After we started to see things like the iPhone come out, companies like Apple and elsewhere were for the first time publishing design guidelines around not just visual styles but also how humans interact with these devices,” he said. “That provided us a compass to take this direction of interaction, visual design, and design language and place it under the umbrella of research patterns.” 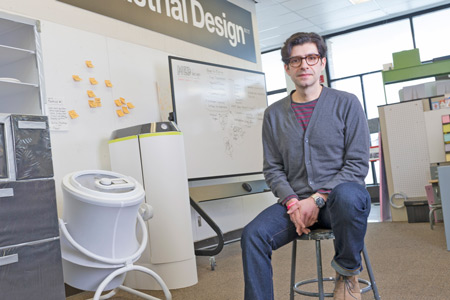 Sustainable Design: As an extended faculty member of the Golisano Institute for Sustainability (GIS), Alex Lobos, associate professor and graduate director of industrial design, noted that researching and designing "green" or environmentally benign products has become even more important.

“Research can be liberating to designers because it provides important details on how users will respond or react to a product in a certain way, so it doesn’t all fall on the designer,” Lobos said.

As an extended faculty member of the Golisano Institute for Sustainability, Lobos noted that researching and designing “green” or environmentally benign products has become even more important in recent years, particularly among younger generations.

“By minimizing waste in the research and design process, you end up with a product that’s very honest and pure,” he said. “Today’s end user will react favorably to that because they can recognize that honesty.”

Solutions for the Real World

The capstone endeavors stem from RIT’s interior design program’s collaboration with Little Angels of Honduras, a nonprofit organization dedicated to reducing infant mortality in the Central American country. Interior design students supplied Little Angels with proposed interior packages for its campaign to build a 4,200-square-foot neonatal intensive care unit addition at Hospital Escuela, Honduras’ largest public hospital, including designs for preemie examination tables and a mobile education unit. LAH’s core mission is to bring optimal conditions for maternal and infant care to Honduras, where the existing high maternal-infant mortality rates are traced to an extreme lack of space and medical equipment hindering the quality of care.

“We had very full days of research and activities at the hospital,” recalled Golden.

Bradley Kwarta, a second-year graduate medical illustration student, has been illustrating extraordinary imagery while embedded in RIT’s NanoBio Device Laboratory during the past year.

Under the direction of Thomas Gaborski, associate professor of biomedical engineering, Kwarta is creating stunning illustrations to support the lab’s cutting-edge research that includes developing porous membrane scaffolds for laboratory models of tissue barriers like the blood-brain barrier, the intestinal wall, and the lung, among others.

“I’m actually inserted into the lab so that if I have any questions I can ask the researchers directly, in real-time, to get a better understanding of what I’m being asked to illustrate,” said Kwarta, a native of Pittsford, N.Y. “Many times, there can be a disconnect between those doing the research and the creative mind, but by being embedded in the lab the process is much more streamlined. I’m often designing new imagery that has never been created before.” 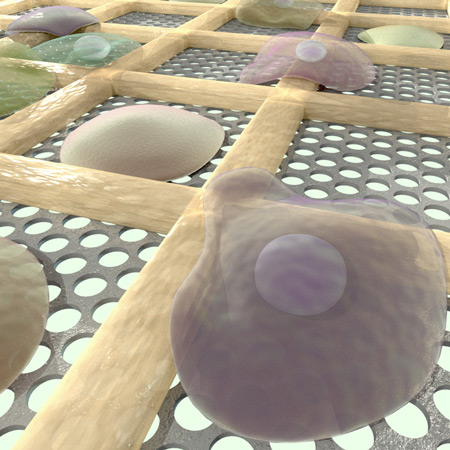 Alluring Arrays: This microarray image by Bradley Kwarta depicts the creation of arrays that can isolate individual cells on top of nanoporous membranes, allowing for individualized experimentation.

Continuing his research and frequently sharing his work with the lab team to make sure it’s on the mark, Kwarta then moves into 3D modeling, shading, and lighting so that his polished illustration can be used for research papers, trade journal articles or presentations at key bioengineering conferences.

The level of science knowledge that medical illustrators such as Kwarta need to know to perform their responsibilities has increased considerably as their role and research importance increases dramatically, according to James Perkins, professor and graduate director of the medical illustration program within RIT’s College of Health Sciences and Technology.

“Medical illustrators need to be able to comprehend the latest research in an obscure topic in molecular biology or cell biology,” Perkins said. “It’s not uncommon for today’s medical illustrators to regularly collaborate with physicians, scientists, and other health care professionals to translate complex scientific information into visual imagery that supports medical education, science research, and patient care.”