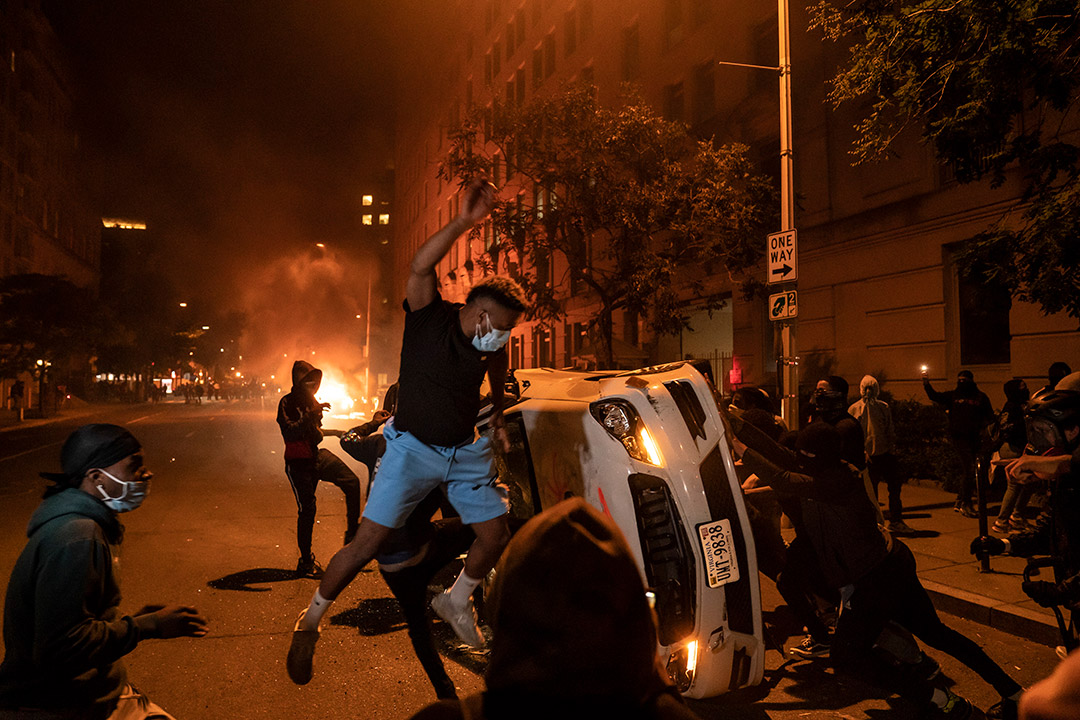 Demonstrators overturn a car on May 31, 2020, as they protest the death of George Floyd, who died after being restrained by Minneapolis police officers. This photo was part of the Pulitzer Prize-winning entry.

The chief photographer for the Associated Press (AP) in Washington, D.C., helped the AP photography staff win the top prize in Breaking News Photography for a collection of compelling photographs from multiple U.S. cities that cohesively captures the country’s response to the police killing of George Floyd. 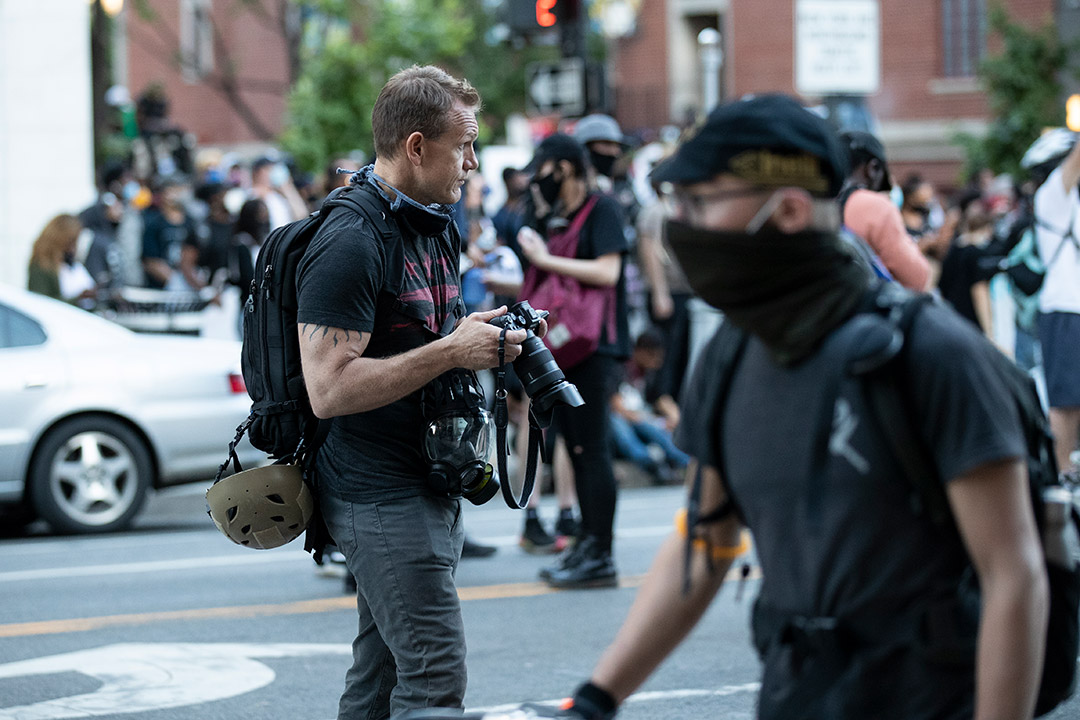 Vucci becomes one of 11 RIT graduates who have now won a combined 15 Pulitzer Prizes.

“When they announced the award, I couldn’t believe it,” said Vucci, who watched the awards ceremony virtually from his D.C. home with his wife and two daughters. “It was very special; my wife took a video with my kids. It was a really nice moment.”

“I’m not much of an awards guy, but I was very happy and proud—especially watching it with my family,” he added. “I was shocked how happy I was.”

Vucci had two photos submitted among the 10-member AP photo team judged on 20 images. One of his photos from June 4, 2020, shows demonstrators protesting in the driving rain near the White House in Washington, D.C. Another powerful shot captures demonstrators overturning a car on May 31, 2020, as they protest the death of Floyd, who died after being restrained by Minneapolis police officers. 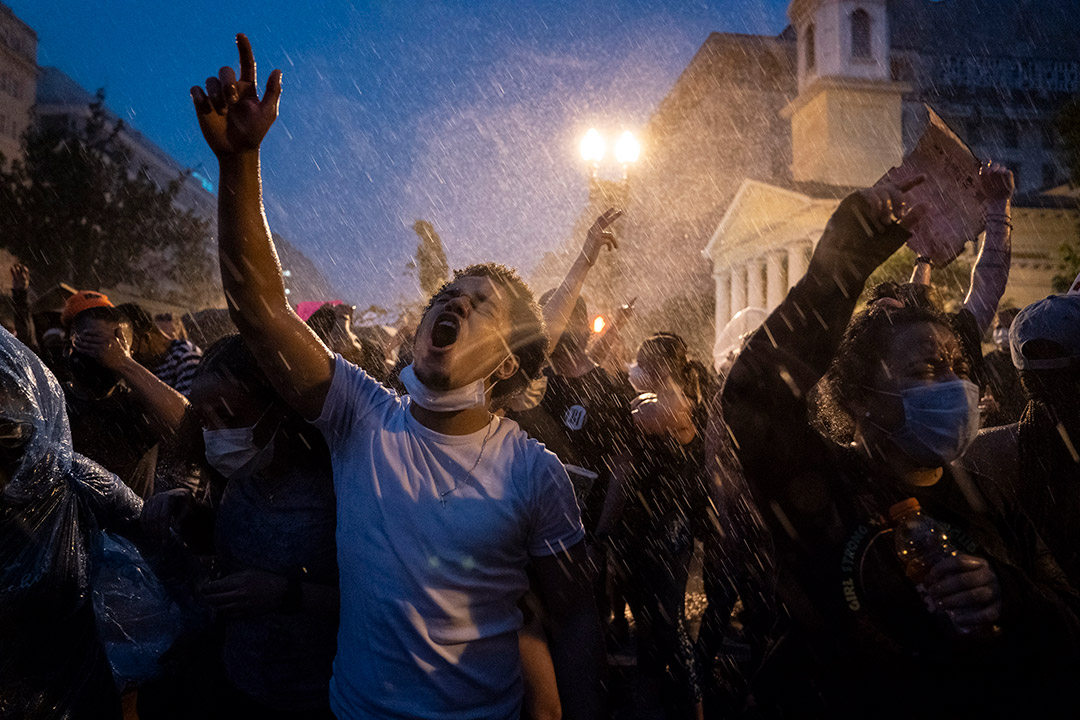 Demonstrators protest in the driving rain near the White House in Washington, D.C. on June 4, 2020. This photo was part of the Pulitzer Prize-winning entry.

The Olney, Md., native, who joined AP as a photographer in 2003, said he was particularly honored because “one day we’ll look at 2020 the same way we did 1968 as far as American history.”

“When the time came for us to carry on the legacy of the Associated Press, we didn’t falter,” he added. “We were able to continue the strong AP legacy … there’s some big footsteps to follow here and what I’m most proud of.”

While it’s been more than two decades since graduating from RIT, Vucci said he continues to hearken back to his days at the university and credits former School of Photographic Arts and Sciences (SPAS) chair Bill DuBois with giving him the passion for photography he still carries with him today.

“His excitement for photography was infectious … he made it fun with his passion,” Vucci recalled. “I knew right away I made the right decision to get into photography, and that I was in the right place.”

“At RIT, we have literally dozens of faculty who have a significant influence on photojournalism students’ style and perspective,” he said. “The photojournalism program has embraced that variety and versatility of style with its strong focus on storytelling, which allows students to develop their own unique voice and vision. That’s what separates us—and our alumni like Evan—in our work.”

Chloe Coleman ‘13, an award-winning photo editor with The Washington Post since 2014, helped the newspaper staff win the top prize in Explanatory Reporting in 2020 for its series that used temperature data from across the globe to examine places where warming has already exceeded the two degrees Celsius threshold—the global community’s accepted limitation of temperature growth to avoid significant and potentially catastrophic changes to the planet.