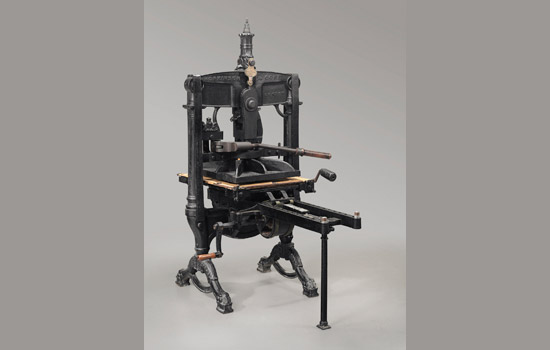 The highest bidder at the Christie’s auction for the Kelmscott/Goudy Albion iron hand press No. 6551 was Rochester Institute of Technology’s Cary Graphic Arts Collection. The press, manufactured by Hopkinson & Cope in 1891, sold for $233,000 on Dec. 6. It will arrive on the RIT campus within the next few weeks.

The Cary Collection’s purchase was made possible by the generous support of the Brooks Bower family. Bower, a 1974 graduate of the School of Print Media, is an RIT trustee and chairman and chief executive officer of Papercone Corp., an envelope-manufacturing firm in Louisville, Ky.

Steven Galbraith, curator of the Cary Collection, said the Albion No. 6551 is one of the most extraordinary presses in printing history and its remarkable provenance began with its original owner, English designer William Morris, who used the press to print the celebrated Works of Geoffrey Chaucer for his Kelmscott Press in 1896. The Kelmscott Chaucer is considered to be among the most beautiful books ever produced and a major influence on the modern private press movement.

“The Kelmscott/Goudy Press will have an active life at RIT, not simply as a museum artifact, but as a working press accessible to students, scholars and printers,” Galbraith said. “I look forward to seeing what is produced on the press in the decades to come. I’m certain that the Kelmscott/Goudy Press will be a great inspiration to students at RIT and to others who visit our library’s pressroom.”

The Kelmscott/Goudy Press has had a notable history of ownership during the past century. In 1924, American type designer Frederic Goudy imported Albion No. 6551 from England to Marlborough, N.Y., for use in his Village Press. Shortly thereafter, Goudy sold it to Spencer Kellogg Jr., who ran the Aries Press of Eden, N.Y.

“From 1932 to 1941, Albion No. 6551 was owned by the Cary Collection’s namesake, Melbert B. Cary Jr., director of Continental Type Founders Association and proprietor of the private Press of the Woolly Whale,” Galbraith explained.

“Cary bequeathed the press to his pressman George Van Vechten, and in 1960, J. Ben and Elizabeth Lieberman acquired Albion No. 6551 for their Herity Press. They topped the press with a Liberty Bell, a reminder of the vital role that private presses play in the freedom of the press.”

Albion No. 6551 will join the Cary Collection’s Arthur M Lowenthal Memorial Pressroom, a working collection of 15 historical printing presses and more than 1,500 fonts of metal and wood type. Supporting study of the press is a collection of Kelmscott Press publications and archives of material related to Frederic Goudy and Cary’s Press of the Woolly Whale.

The Cary Graphic Arts Collection is located on the second floor of The Wallace Center at RIT. Hours are from 9 a.m. to noon and 1 to 5 p.m. Monday through Friday. For information, call 585-475-3961 or go the RIT Cary Collection website.

Note: Established at RIT in 1969, the Cary Graphic Arts Collection is one of the country’s premier libraries on graphic communication history and practices. Originally comprised of 2,300 books from the estate of Melbert B. Cary Jr., the collection has expanded into a comprehensive resource on the development of the alphabet and writing systems, early book formats and manuscripts, calligraphy, typefaces and their manufacturing technologies, bookbinding, papermaking, printing and illustration processes, and artists’ books. The Cary Collection also manages the RIT Graphic Design Archive comprised of 42 archives documenting the work of important 20th-century Modernist graphic designers.