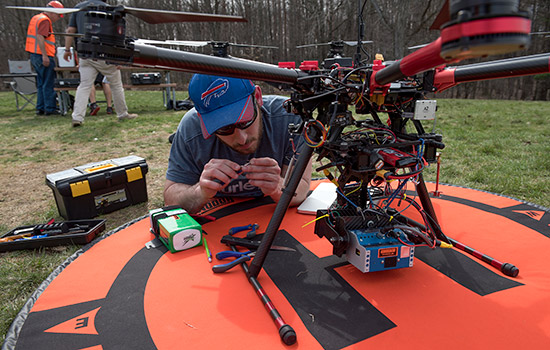 Jeremy Sardella from Buffalo, N.Y., prepares a drone for a test flight at Mendon Ponds Park.

An off-the-shelf drone customized for archeological surveys by Rochester Institute of Technology students will be on exhibit at the 10th annual Imagine RIT: Innovation and Creativity Festival on May 6.

The Multispectral Imaging Drone will be located all day in The Think Tank zone in the Mobius Quad on the RIT campus. Members of the senior design team from the Kate Gleason College of Engineering and the College of Science developed the drone as an archeological survey tool to locate potential artifacts prior to a dig. Data taken off the drone could be used to locate objects on the ground or buried a few meters below the surface.

The idea began with project manager Leah Bartnik, a senior in RIT’s Chester F. Carlson Center for Imaging Science, who grew up in West Seneca, N.Y., near the Penn-Dixie Fossil Park and Nature Reserve. While in high school, Bartnik worked at Penn-Dixie during the summers and fell in love with paleontology.

She wanted her senior capstone project to combine her interests in imaging science and paleontology, and to give her experience on an engineering team. Because RIT doesn’t have a resident paleontologist, Bartnik used her senior capstone project in imaging science to customize an imaging system for archeologist William Middleton, associate professor in RIT’s College of Liberal Arts. The team designed their drone to accommodate Middleton’s search for Mayan ruins at an excavation site in Oaxaca, Mexico.

Bartnik designed the imaging system that clips on to the drone and measures chlorophyll, or the green pigment in vegetation. Her system combines a regular camera and near infrared sensors to measure the green pigment reflected in different wavelengths of light. Low levels of chlorophyll are a clue that an object of interest might be obstructing the roots. The thermal camera in the imaging system provides additional information to support or disprove the hunch.

“If there is a feature that emits heat at a different rate than the ground, and its position correlates with a feature that is stressing out the vegetation, there is probably something right at the surface or a few meters below,” Bartnik said.

The imaging system is about the size of a tissue box and attaches to the custom-made gimbal built by mechanical engineers Ben McFadden from Fairport, N.Y., and Gavin Bailey, from Remson, N.Y. The carbon-fiber gimbal is the pivotal support mounted to the drone.

The imaging system and the gimbal had to be integrated with drone. The four electrical engineers on the team—Ryan Moore from New Hartford, N.Y.; Jeremy Sardella from Buffalo, N.Y.; Stephen Depot from Utica, N.Y.; and Arthur Svec from Fairfax, Va.—tied together the various software and control systems, including a flight planning system.

Imaging scientists, mechanical engineers and electrical engineers approach problems from the perspective of their own disciplines, and the project’s success depended on the students’ ability to interrelate. The yearlong project gave them insight into what makes a successful team work.

“We all communicated very well together, and we kept up to date with what everyone was doing,” Sardella said. “There isn’t a single person in the group who didn’t pull their weight.”