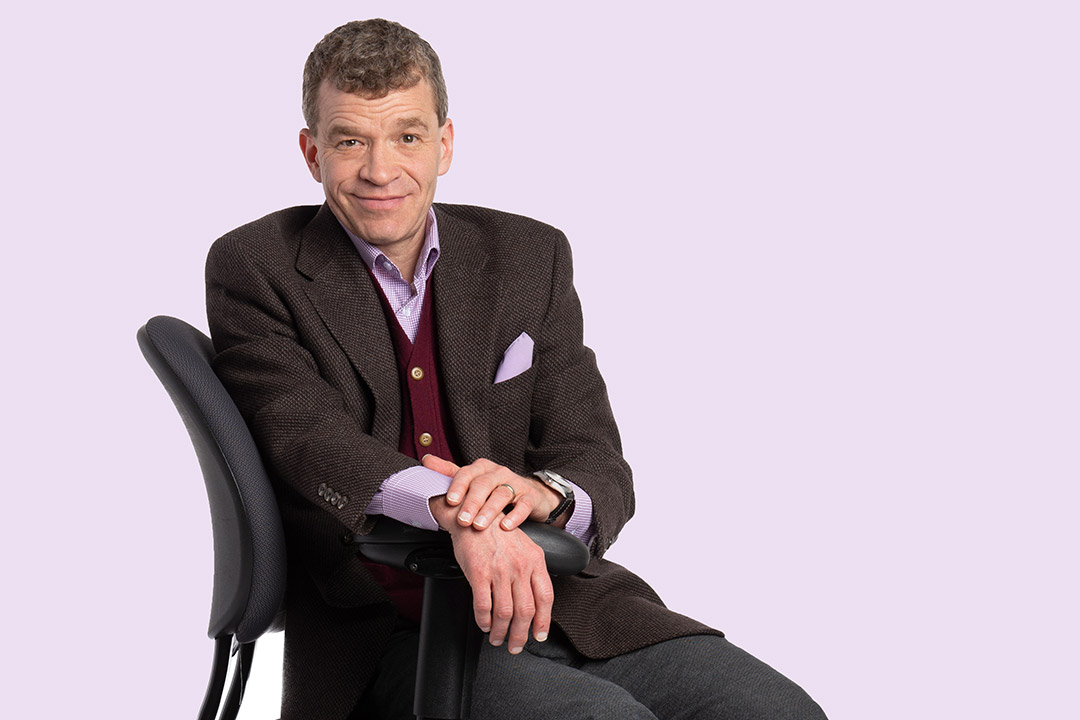 When Richard Newman graduated from high school, he never imagined he’d wind up being a college history professor. “I was going to be a physical therapist, or a journalist, or work in business,” he said. “I never had any intrinsic love for history.”

That changed in his junior year at the University at Buffalo, when he realized history was more than names, dates, and facts.

“It’s about argumentation and debate,” he said. “It’s about how changes occur throughout time and how certain issues get put on political or social maps, and I got really excited about that.”

Newman, a professor of history in RIT’s College of Liberal Arts, came to RIT in 1998. He specializes in early American, African-American, and environmental history.

In 2014, Newman took a leave of absence from RIT for nearly three years to work as the executive director of The Library Company of Philadelphia, Benjamin Franklin’s library founded in 1731.

“It was one of the best experiences of my life because it wasn’t just a history institution which I had fallen in love with—you have original copies of the Declaration of Independence and Ben Franklin’s books there,” he said. “It was also a small business. I had to think about accounts payable, balanced budgets, endowments… learning about all those things was invaluable.”

That experience helped when he returned to the classroom.

“I think that’s a really important lesson for students that their whole college education is what makes them a powerful candidate for a job, not just their major,” Newman said. “It’s everything you learn.”

What can your students expect in class?

I want them to be excited about history and the study of history. We’re constantly shifting from little mini lectures to discussions to some video to maybe some debate to some historical role play because I think that’s the best way to really keep people excited about history. Sometimes I’ll ask them an open-ended question about a contemporary issue. I try to use media and technology as much as possible, so often I’ll put up an image of a monument and have a discussion about that.

Have you kept in contact with students who have graduated?

Yes, I’m always interested in hearing their stories about what happened in the job market and in their careers. Some have worked on digital mapping, communications, in city government, public radio, helping businesses work on digital applications that relate to history, museums, education. Some have gone to Silicon Valley to become entrepreneurs, some become dentists…all of them have passed through my classes and hopefully learned something about the importance of history and the importance of liberal arts.

Do RIT students learn history differently than other college students?

For their final exam in my introduction to history class, they get the option of either doing a traditional final paper, based on class research, or they could do a final project where they could do a digital project, an online exhibit, even a video montage. That’s because students with all their technical or artistic majors have all of these different tools at their disposal to do some really interesting things in the classroom, so I’m letting them run with that.

You’ve authored or edited seven books. Do you have other books you plan to write?

Yes, two. One is a 200-year history of emancipation and civil rights struggles in America, which tries to retell the history of civil rights all the way back to 1776. In a weird way, we’re still in a cycle of advancement and entrenchment like the people before the Civil War were involved in. The other book will look at the debate about Confederate statues in America from the end of the Civil War to the present with a focus on putting up statues of African-Americans. Rochester is a key place for that debate because it’s the city associated with the statue dedicated to Frederick Douglass in the 1890s.

Studying history is more than poring over textbooks and old documents. In this edition of Intersections: The RIT Podcast, history professor Richard Newman and humanities professor Lisa Hermsen talk about place-based learning, which gets students into the community to experience where the history happened.