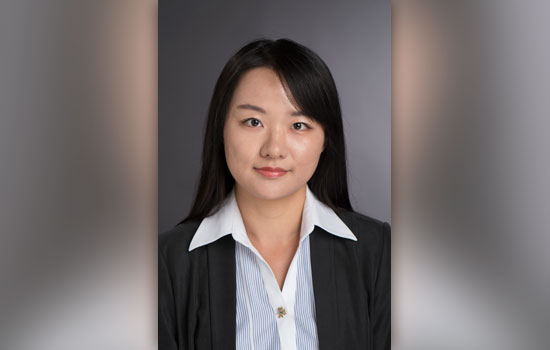 Devices Zhang’s research group is creating have the potential to demonstrate that a deeper, fairly unrealized range of the ultraviolet (UV) light spectrum is as efficient as current near-UV used in today’s LED lights. Increasing the efficiencies of optoelectronic devices, specifically using ultraviolet LED technologies, could advance important applications in photolithography, 3D printing, purification systems and a variety of sensing applications.

The challenge is, the further along the UV range, the less efficient the technology being produced; however, preliminary physics analysis and tests on device prototypes show promise, she explained.

“What I propose to do is on semiconductor-based UV optoelectronic devices, which are efficient, compact and the lifetime of the devices is very long compared to mercury-based, UV light sources,” said Zhang, an assistant professor in the electrical and microelectronic engineering department in RIT’s Kate Gleason College of Engineering. “Semiconductor materials are environmentally-friendly compared to mercury-based UV bulbs. That is why this new type of device we are developing is very promising—if we can deliver higher efficiencies toward those devices.”

The UV light spectrum is being explored further because differing aspects react well with certain bio and chemical agents, which are beneficial for biomedical applications, Zhang continued. UV light has also been used for air and water purification systems and to cure resins for 3D printers. Advancing these technologies is becoming more important, but the efficiencies of the UV LEDs are low compared to current, visible LEDs, a mature technology that has been commercially available for more than two decades.

“Shorter wavelengths with the UV devices have efficiencies less than 10 percent, sometimes even as low as 1 percent. This is the reason why we really don’t have reliable, commercially available UV LEDs based on semiconductors yet,” she said, adding that the material used for current microchips for LEDs is indium gallium nitride—considered a narrow band gap material. In this new project, Zhang will explore use of aluminum gallium nitride—a much wider band gap material. It is essentially from the same family of materials—III nitrides—but with distinctly different material properties and physics.

Aluminum gallium nitride, however, is less developed because the material is more difficult to grow and often has more defects and dislocations. Zhang has been able to make inroads in this area.

“We have already developed the fabrication process for the UV LEDs; it is already mature in our group,” said Zhang, whose research expertise is in the area of III-Nitride semiconductors for photonics and energy applications. “We have developed the physics, and we have promising preliminary results on very initial UV LEDs. We are going to continue the research with these results and see how we can achieve optimized novel device structures.”

Zhang’s NSF award of $500,145 is for five years for “Development of high-efficiency ultraviolet optoelectronics: physics and novel device concepts.” This project goal is to realize high-efficiency ultraviolet photonic devices. The Faculty Early Career Development (CAREER) Program is one of the National Science Foundation’s most prestigious awards in support of early-career faculty who have the potential to serve as academic role models in research and education and to lead advances in the mission of their department or organization.