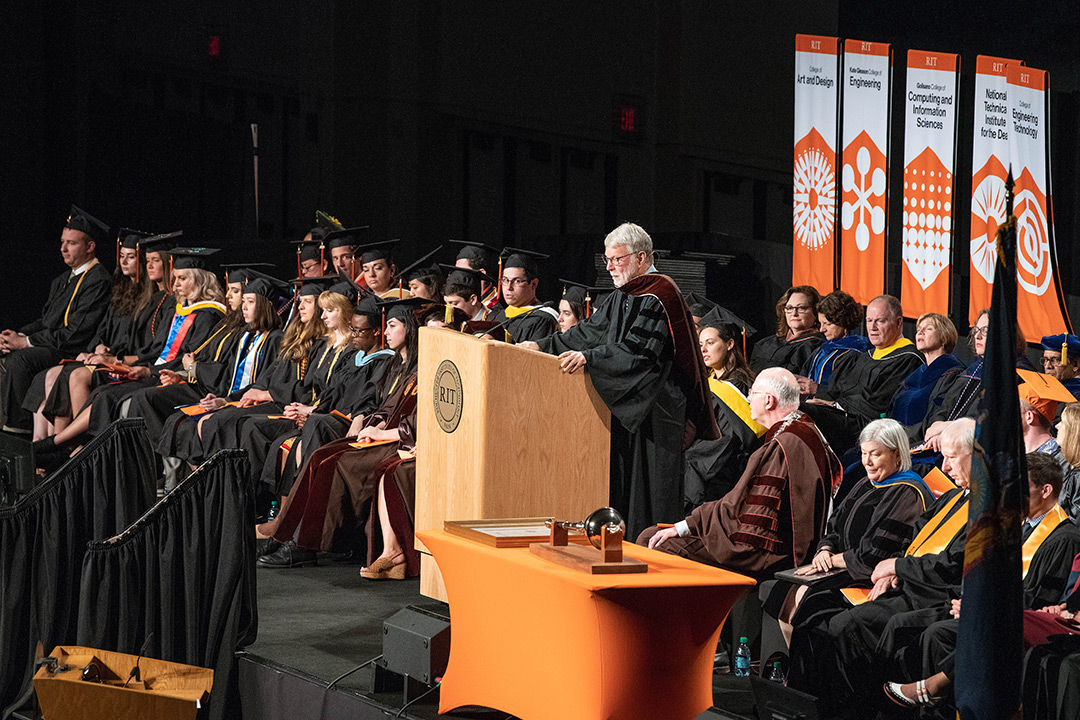 Keynote speaker John Seely Brown addressed the crowd at the Gordon Field House during RIT's 134th annual commencement ceremony on May 10. The full text of his speech is below:

It is a great honor for me to be here as your commencement speaker, made all the more wonderful because I am practically back at home.

As some of you know I spent more than two decades at Xerox Corporation at the end of the last century. Not here in Rochester but in Palo Alto as head of their research center.

Our mission at PARC, way back then, was to invent the future – from the ethernet, to personal computing to graphical user interfaces, Smalltalk, Ubiquitous computing and so on.

Those were truly exciting times! I feel fortunate to have been part of it!

Quite honestly, though, I now feel a bit envious for those of you graduating today. Back then, nearly 50 years ago, it was the beginning of the Information age and it wasn’t that hard to invent or build super cool things, as is often the opportunity when one finds oneself at the beginning of a new era.

But today, we – you and I - are at the beginning of another new era: the Imagination Age - an age that calls for new ways to see, to imagine, to think, to act, to learn, and one that, I will argue, also calls for us to re-examine the foundations of our way of being – being human – and what it means to be human. Something, we seem to be neglecting in a context of uncertainty and ambiguity.

We are living in a white water world – the metaphor of my close friend and co-author Ann Pendleton-Jullian. It is a world that is rapidly moving in often surprising and unforeseen ways. It is radically contingent yet hard to anticipate. It is a world in which we – you – must learn, like a white water kayaker, to skillfully read the currents and disturbances of the context around you -- interpreting the surface flows, ripples and rapids for what they reveal about what lies beneath the surface.

Using both body and mind, the white water kayaker lives the contingency of the moment -- the immediate at-hand circumstances presented. Using all his or her senses -- sight, sound, touch, and the feedback from the forces exerted on the paddles, she continuously senses how the environment is responding to her actions in, and on, it.

Let’s run a brief video of a white water kayak..

The white water kayaker is having a conversation with the flow. In this conversation, seeing is sensing. Not like other conversations, these conversations feel for the flow of information passing all around.

But what keeps the white water kayaker afloat? What helps him find the right set-up for a run and what helps him roll aright when he flips over? It is the way he uses his body’s center of gravity - - his core axis of operation, his line of balance. It is this axis of balance that gives him the confidence to take on the white water and increase his levels of risk-taking and skill building – which, as we know, are interlinked.

In this metaphor, this line of balance and confidence is analogous to authenticity and integrity. Authenticity is simply the capacity to know yourself, your core strengths, weaknesses, values, and motivations; and to work from them and for them. In a radically contingent white water world, decisions and actions need an authentic place to work from.

Yes, this is a different world – a world in which skills matter, tools matter, but integrity and authenticity are also required. It is a world with powerful tools galore. And it is a world of immense opportunities IF you are willing to unleash your imagination while invoking your skills.

I bring this all up here since in many ways at RIT you have already experienced working in environments where being skilled at reading the context of the workplace, leveraging the flows, reading the skills and dispositions of those you are working with, -- all of these are necessary for agency.  What you probably have already experienced is somewhat akin to a river of class 1, maybe class 2 rapids.  The water has been mostly smooth to moderately quick with light ripples or smooth waves, occasional obstacles but gentle curves and clear passages. Problems might arise when maneuvering but you have those under control.

But you are graduating and soon you will need to level up both your skills and your resiliency as you take on more complex assignments and encounter more complex situations and problems in our increasingly hyper-connected world where small changes propagate at network speeds leading to an even more contingent world that will tax all of your technical and mental capabilities.

Said most bluntly, your learning has just started as you graduate here today. Fortunately, here you have been exposed to not just learning in the classroom but also learning in situ, learning in action, learning thru doing made more valuable through reflection on successes, partial successes and outright failures.

These real world learning experiences have helped set the stage for you to become a true entrepreneurial learner, one who has evolved a disposition that:

Is deeply curious and listening to others.

Is always learning with and from others.

And finally, is willing to reflect on performance, alone and with the help of others – that is, becoming a reflective practitioner.

This last one is critical. Indeed, you need to continue to evolve your own skills, but you also need to develop skills to connect with others both inside and outside of your own tribes and organizations.  In today’s world, social capital may be as important as intellectual capital. Strangely, this is not yet a kind of capital that is classically measured or explicitly developed. In today’s white water world, few challenges can be solved alone – no matter how good one is. As a networked world, we can leverage the power of social capital in new ways and with new social protocols that help us work in distributed teams all over the world.

I would like to end today’s talk by reflecting on some quotes from three heroes of mine. Although they speak to us from the past (one of them is over 500 years in the past), I think they are now more relevant than ever!

The first should be no surprise to you given the kind of education you have had here. It is from Leonardo da Vinci, who said:

To develop a complete mind, one must study the science of art; and study the art of science. Learn how to see; and realize that everything connects to everything else.

For me, the brilliance of this quote is two-fold.

First, is that it explicitly calls for the entanglement of what many consider to be two opposites- the science of art, on the one hand, and the art of science, on the other hand, in order to forge a complete mind. Secondly, it calls for seeing connections in everything –seeing as its own kind of artistry – virtuosity, even.

Da Vinci was, in fact, as we know: both an engineer/scientist and a painter/humanist. This means he saw the world through multiples lenses, overlaying these perspectives and ways of being, collapsing – or expanding – the world through these multi-dimensional frames. Finding and living connections – everything connected to everything - a kind of deep relationship with the world that is afforded through the way the humanities help many of us (from the more quantitative side of making/doing) see and read the broader context of the issues we are confronting.

The second quote I want to share is also about seeing connections but it also concerns the keys to innovation: Arthur Schopenhauer said, “the task is not so much to see what no one yet has seen, but to think what nobody yet has thought about that which everybody sees.”

Schopenhauer died in 1860 but this is a quote that is even more important today. Just consider, for example, Uber! -- a company that saw something nobody else did. Its founder, Garrett Camp, saw possibility in the untapped resource of time that all sorts of people who drive have. As of last week, Uber was valued at 100 billion dollars. People who drive are all around us. Tapping into their free time was a ‘thought that nobody else had about what one could easily see all around us.’

The person who best epitomizes this capacity to think beyond what everyone sees right in front of them is Sherlock Holmes. Holmes sees with his imagination. He even reasons with his imagination. To solve seemingly unsolvable cases, Holmes uses an almost pathological form of abductive reasoning, constructing possible stories (not merely theories) around both facts and missing facts.

Holmes presents, potentially, one of the most extreme uses of abductive logic, one that is clearly dependent upon the imagination as much as the reasoning mind. He himself is acutely aware of this. In the case of Silver Blaze, upon receiving all the evidence from one of the most competent Police Detectives with whom he regularly works, Holmes boasts to Watson,

“Inspector Gregory, to whom the case has been committed, is an extremely competent officer. Were he but gifted with imagination he might rise to great heights in his profession.”

Imagination is fully at play in Holmes’ most difficult cases. So much so that it precedes reasoning. Often, when asked if he has an answer to the events in front of him, he will respond “seven” or “three,” meaning that he has that many viable hypothetical stories – imagined sequences of events – that he will then test against the clues available and the things they know.

In his problem-solving, Holmes is truly pushing the boundary of abductive reasoning, using his imagination to break sense of what is, to imagine what could be, and then reasoning does the clean-up. For Holmes, reasoning with imagination in tow, or reasoning through the imagination, is magical and adventurous.

And I want to be clear, I am not talking about the ‘creative arts’ kind of imagination, useful as that is, but the kind associated with empathy questions. What questions would one ask if they imagined themselves in the shoes, or situation of another.

He then goes on to say: “The intuitive mind is a sacred gift and the rational mind is a faithful servant. We have created a society that honors the servant and has forgotten the gift.”

It is my hope that those of you graduating today will not forget the gift of the intuitive mind for that is the playground of the imagination.

Thank you and good luck in this complex, white water world you are entering.