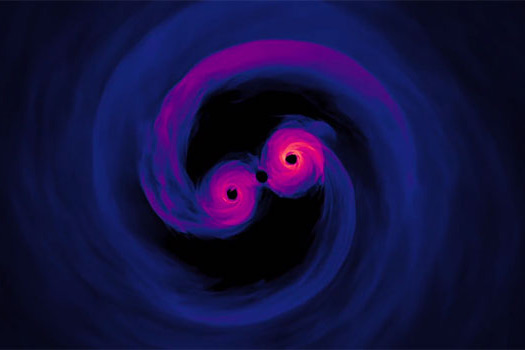 Gas glows brightly in this screengrab of a computer simulation of supermassive black holes only 40 orbits from merging.

The hunt is on for orbiting pairs of supermassive black holes on the verge of collision. Researchers at Rochester Institute of Technology have built the first simulation that could lead scientists to them.

Predicting the characteristic light signals and the timing of their occurrence will help scientists identify these monster collisions with existing and future telescopes and better understand what is happening at the hearts of most galaxies, according to Manuela Campanelli, director of RIT’s Center for Computational Relativity and Gravitation and a co-author of the new study.

Findings from the paper, “Electromagnetic emission from supermassive binary black holes approaching merger,” appeared in the Oct. 2 issue of The Astrophysical Journal.

The study builds on a prior RIT study that suggests three gas disks as the light sources: two small companion disk of accreting gas feed each supermassive black hole; and a larger disk that contains the scenario playing out within its boundaries.

The computational model applies multi-messenger astronomy by combining information gathered from light- and gravitational waves, and high-energy particles. The mini-movies illustrating the simulation are the first to fully visualize the effects of Einstein’s general theory of relativity on the light and particles surrounding and passing between supermassive black holes orbiting each other.

“These are really beautiful images,” said Stéphane d’Ascoli, first author on the paper and a doctoral student at École Normale Supérieure in Paris. D’Ascoli collaborated with researchers at RIT’s Center for Computational Relativity and Gravitation, where he was a Visiting Scholar and Graduate Student Intern.

“You can see gravitational lensing and subtle effects we weren’t expecting, like ‘eyebrows,’ these secondary images of a black hole created by the way that light passes through the system,” he said.

D’Ascoli worked closely with Campanelli, who had initiated the project nine years ago, and with co-author and former post-doctoral fellow Scott Noble, now at NASA Goddard Space Flight Center. Additional co-authors on the paper include Dennis Bowen and Vassilios Mewes, postdoctoral researchers at RIT; and Julian Krolik from Johns Hopkins University.

“Identifying the light signatures from supermassive black hole binaries by some of the many electromagnetic telescopes operating now could jump-start the field of multimessenger astronomy and sharply refine our estimates of the population and evolution of supermassive black holes as well as guiding planning and development of space-based gravitational wave observatories,” Campanelli said.

Campanelli’s early research was instrumental to the first direct detection of stellar-mass binary black holes and discovery of gravitational waves by the LIGO-Virgo Collaboration. Stellar mass black holes result from supernovae explosions; supermassive black holes form when galaxies merge and drag along an entourage of gas and dust clouds, stars and planets.

“We know galaxies with central supermassive black holes combine all the time in the universe, yet we only see a small fraction of galaxies with two supermassive black holes near their center,” Noble said. “The ones we do see are not close enough to be emitting strong gravitational wave signals because they are too far away from each other. We are after seeing—with light—the close pairs, what we call binaries, for the first time.”

Campanelli’s team was one of the first to computationally simulate and predict gravitational wave signals from a stellar mass black hole merger a decade before LIGO directly observed the waveforms.

The simulation ran on the National Center for Supercomputing Applications’ Blue Waters supercomputer at the University of Illinois at Urbana Champaign. Campanelli’s team was recently awarded additional time on Blue Waters to continue developing their models.