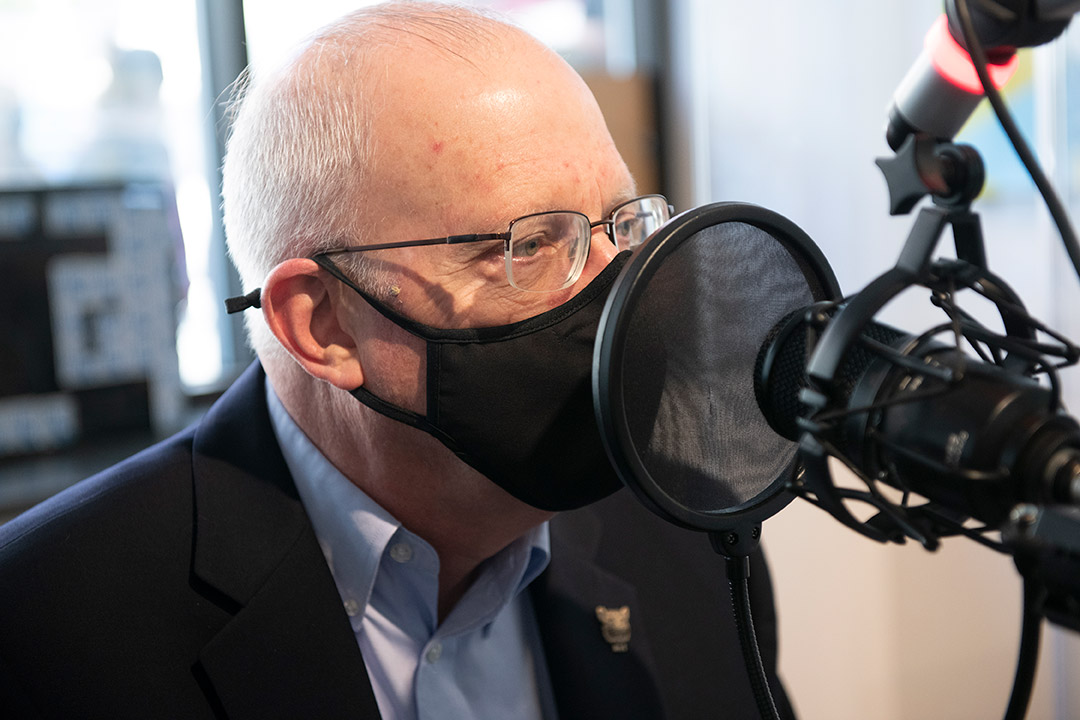 RIT President David Munson answers questions about how the semester is progressing and plans for the future during an “Ask Munson” interview on WITR-FM (89.7) radio.

RIT President David Munson said the campus now is as lively as he’s ever seen it, with students enjoying activities, this weekend’s Brick City Homecoming and Family Weekend, and construction projects at full speed.

“There is a lot of pent-up energy and a lot of people working hard, but having a good time as well,” he said Wednesday in his latest “Ask Munson” series on WITR-FM (89.7).

Munson commented on the pandemic by noting that wastewater monitoring continues, as does weekly testing for all unvaccinated students and employees, resulting in one or two positive cases each day in each group.

“Those sound like numbers that may mount up, but we have an enormous community here at RIT and we’re actually very proud of our numbers,” Munson said. “We’re staying safe. We’re really proud of our faculty, staff, and especially our students, in how our community has handled the pandemic. I think we’ve run one of the safest campuses in the nation. And this semester, we see we’re able to carry out most of our activities in a pretty normal fashion.”

This week, it was announced all RIT employees, including those working off-campus, are required to have their COVID vaccination(s) before Dec. 8 to continue employment.

“We had been contemplating vaccinations among our faculty and staff and had been going back and forth on that for a variety of reasons, one of which was because we already had a high vaccination rate,” Munson said. “But the federal government has made that decision for us. Because we are a federal contractor, in the form of research funds from the federal government, we must have our employees vaccinated. We don’t have a choice in that matter.”

Although many restrictions have been eased from last year, he said indoor masking in public areas will continue for a while, following advice from the Centers for Disease Control and Prevention.

“I feel like we’ve got things well in hand,” Munson said. “I think the measures we have in place should carry us through the winter.”

The largest project, on the Student Hall for Exploration and Development, or SHED, has even more steel girders to be added.

“As big as it looks now, they’re not finished,” Munson said. “It’s going to be really neat to see them put the skin on the building. What’s not visible is what’s happening inside the old Wallace Library. Inside, it’s basically been gutted, you would not recognize anything in there. It’s going to have higher ceilings when it’s finished, there are going to be huge, multiple openings on every floor, and it’s going to be a pretty seamless complex once it’s finished.”

New athletic fields are also taking shape, with a lot of earth moved this summer for a new track north of the loop road, he said. The women’s softball field and a new baseball field, both with artificial turf, are also progressing. And a new stadium has been designed, but fundraising needs to be done before construction begins on that project.

In addition, improvements for the College of Art and Design are nearing completion, with direct access into MAGIC Spell Studios. “The inside of Gannett has never looked so good,” he said.

And a ceremonial groundbreaking was recently held for Saunders College of Business. Actual construction begins in the spring, which will approximately double the size of the college. The addition was almost entirely paid for by donors and a state grant.

Spring will also see construction begin on the first phase of the proposed performing arts theater.

Growth is even evident at RIT Dubai, where the Dubai government built a new campus that can accommodate 2,500 students, with an expected addition that will enable 4,000 students to study there.

“It’s completely unbelievable,” Munson said. “The architecture is dramatic. It’s beautiful. Dubai attracts students from a lot of different places including quite a number of students from Henrietta who get to have an experience over there. And they have a wonderful set of students there.”

Asked about plans for new housing, Munson said that is being looked at in a campus master plan, which was relaunched this week with an outside consultant.

“They’ll look out 50 years into the future where buildings will go and land usage, and we’ll see what comes out of that planning process,” he said. Off-campus housing options are expected for upperclassmen, including Innovation Square, the former Xerox tower downtown, where several floors are being renovated for a multi-university complex for student housing.

“RIT as an institution has a strong interest in reintegrating in center city Rochester,” Munson said. “Our students can really benefit a lot with some of the things that happen downtown. And for students wanting to live somewhere off campus, that will be a pretty cool option.”

In other university initiatives, Munson said plans are moving forward on RIT’s Action Plan for Race and Ethnicity. “All that work is underway and I think there are literally hundreds of people involved now working on these projects.”

Munson closed the interview by emphasizing the importance of students taking time to improve their mental health.

“This happens on every campus that has high achievers with a lot of high aspirations. We work hard, we play hard, and people get worn out,” he said. “We’ve got a lot of wellness courses you could sign up for. We can’t work 100 percent of the time as much as we may love our work and our studies. I would just ask everybody in our community to take care of yourself.”