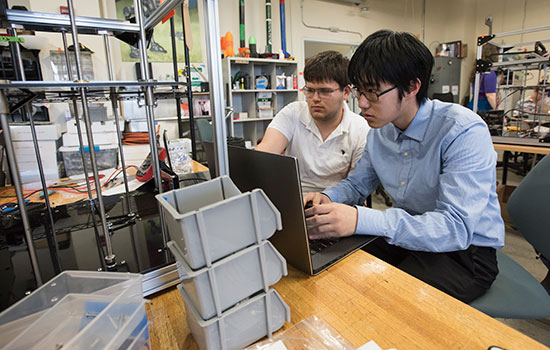 Chris Moriarty, left, and Kenny Kim work as a team to build a 3D printer in the three-week Career Ready Boot Camp to help RIT students with autism prepare for job interviews and work with others.

It’s hard enough to prepare for a job interview, but when you have autism, which may include idiosyncrasies such as minimal eye contact during conversation, getting hired can be harder, even with excellent qualifications.

The parents of a current RIT student with autism made a significant donation to help start the two programs, which will impact the graduation and employment outcomes of many of the 180 RIT students enrolled in the Spectrum Support Program or identify on the autism spectrum, said Laurie Ackles, director of RIT’s Spectrum Support Program. More fundraising will be needed to sustain the program at a high level, which may include stipends for living expenses during co-ops, coaching students in career readiness, building more opportunities for jobs through networking between students and employers, and increasing the number of students participating in the summer boot camp.

“Most students are academically capable, some incredibly bright students,” Ackles said. “That’s what they have in common. But some have more trouble socially, understanding social expectations or presenting themselves as capable to employers because they lack eye contact or have trouble communicating their fit. That awkward presentation can also get in the way during interviews. Sometimes atypical body language can communicate a lack of confidence in the skills needed for the job.”

Kendra Evans, who created the camp’s curriculum and was one of its instructors, said each student determined what they could best use to help themselves improve their social skills.

“We teach them how better to portray themselves,” she said. “These are brilliant young men and women, but what they need to do is communicate their skills and talents to their employers.”

“They came in not knowing exactly what they will get out of this and gained a sense of awareness and strength about the skills important in the workplace,” she said. “These skills are transferable in any job.”

One attendee, Alaina Russell, an electrical engineering major from Boulder, Colo., had a 3.9 GPA as she completed her first year at RIT. She wanted to go to the camp because working with others was something that made her nervous, which might impact her ability to work with others in the future. She said the program helped improve her self-confidence.

“I wanted to expand my knowledge and improve on my teamwork skills and working together,” she said. “I like the people that I’ve met. I really like the teachers here and I’ve gotten along well with other students,” Russell said. “I feel like I’ve made some friends.”

Kenny Kim, an undecided major from Deerfield, Ill., hoped the camp would be a good stepping stone to help him in a job interview, whether it was for a co-op or a permanent job.

Like any college student, he wanted to learn how to write a résumé and leave a good impression with a prospective employer. He also worked well with his partner as they were the first team to get their 3D printer running.

Last fall, RIT’s Neurodiverse Hiring Initiative began helping students with autism find co-op employment. More than 60 students participated in networking events just prior to the fall and spring career fairs, where they got to practice their elevator pitches and learn more about employment opportunities. One student was hired for a summer internship at Bank of America from the event. A bank representative said, “As soon as I met him and read his résumé, I knew I wanted to interview him. His skills stood out right away, and he got through the hiring process quickly. The fact that he is on the autism spectrum is an added bonus for us, but his skills are what really stood out to me.”

Many of the local co-op opportunities are on the RIT campus, but some are with private employers.

“I love it here,” Ledet said. “I feel I am a valuable member of the team, and I’m using materials I’ve learned directly in class.”

“I really like it here,” said Littlefield. “When I heard what they wanted me to do, I knew I was the right person for the job.”

Tory Van Voorhis, Second Avenue’s CEO, said Ledet and Littlefield are fitting in well with her 22 employees, most of whom are also RIT students or graduates. She said they have discussed environmental accommodations and best communication options, have open spaces to encourage collaboration, closed rooms if someone needs to work in a quiet area, daily group walks and standup reports to colleagues to say what they are working on.

“Our company has a strong commitment to have a diverse workforce,” Van Voorhis said. “We’re happy to be part of the Neurodiverse Hiring Initiative. These students are intelligent and incredibly talented. This program is a great way for us to identify good employees, and it gives the students a way to experience working in the real world.”

Employers interested in finding out more about neurodiverse hiring may contact Janine Rowe, at RIT’s Career Services or visit rit.edu/neurodiversehiring. 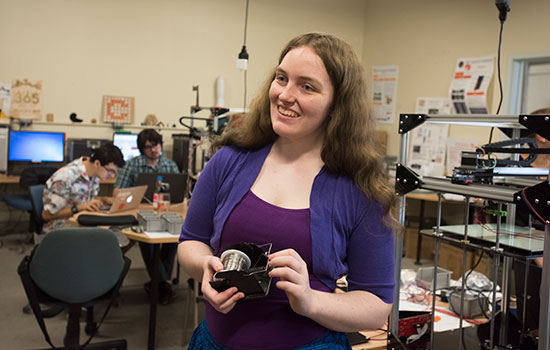 Alaina Russell was one of nine RIT students who participated in a three-week Career Ready Boot Camp to help students with autism prepare for job interviews and work with others. A. Sue Weisler 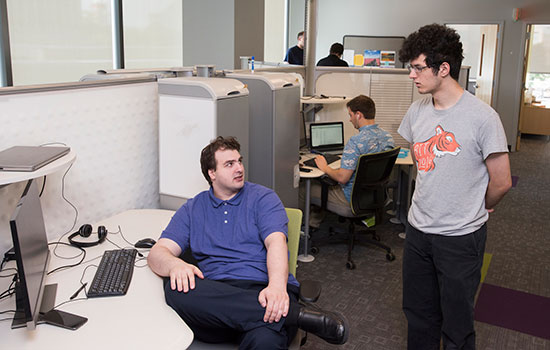