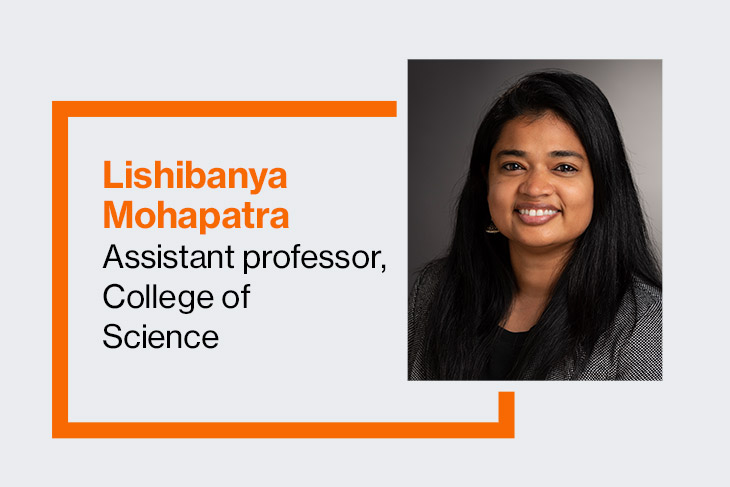 Lishibanya Mohapatra, an assistant professor at RIT’s School of Physics and Astronomy, earned a five-year, $1.7 million grant from the National Institutes of Health to study how cells control the size of organelles.

A Rochester Institute of Technology scientist hopes that a better understanding of how living cells maintain the size of their organelles can lead to therapies for neurodegenerative diseases. Lishibanya Mohapatra, an assistant professor at RIT’s School of Physics and Astronomy, earned a five-year, $1.7 million Maximizing Investigators’ Research Award for Early Stage Investigators from the National Institutes of Health to study how cells control the size of organelles. The award supports research that can accelerate the development of new technologies for disease diagnosis, treatment, and prevention.

“Misregulation in organelle size has been associated with a number of diseases, hence the need to understand how organelle size is controlled within a cell,” said Mohapatra. “Biochemical experiments have identified many of the proteins involved in the assembly of these organelles. However, the high dimensionality in their interactions makes it really challenging to understand how they all work together through experiments alone. Mathematical modeling is a systematic and cost-effective way to hypothesize and quantitatively describe how different proteins might interact with each other in order to create properly-sized organelles.”

Specifically, Mohapatra and her team will focus on modeling two types of organelles: actin structures and nucleoli. Abnormalities in the assembly of actin structures are associated with Amyotrophic Lateral Sclerosis (ALS), and abnormalities with the nucleolus coincides with Parkinson’s and Alzheimer’s disease. A key aspect of the research is to help design experiments that can test the predictions made by the various quantitative models.

“We want to identify molecular knobs that can be tuned in experiments and use them to test our model predictions,” said Mohapatra.

Mohapatra will lead an interdisciplinary team of physicists, biologists, and biochemists including collaborators from McGill University, Emory University, and the University of Virginia. She is currently actively recruiting a postdoctoral researcher and several graduate and undergraduate students from RIT to help with quantitative work and analyzing experimental data. For more information, go to the Mohapatra Research Group website.