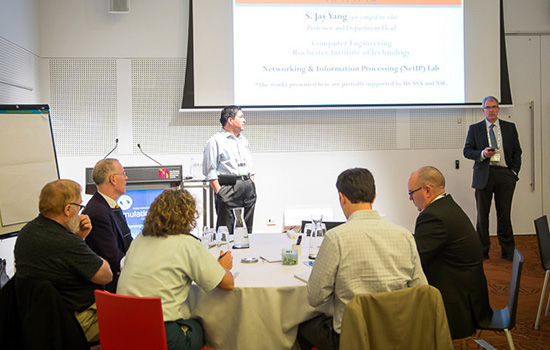 Shanchieh Yang presented information about his cybersecurity research at the international Australasian Simulation Congress this fall.

Shanchieh (Jay) Yang, department head of computer engineering at Rochester Institute of Technology and a leading researcher in cybersecurity trends and situational awareness, participated at the Australasian Simulation Congress and annual conference this fall. He was both a plenary speaker and presented a master class to colleagues on “Network attack simulation: An enabler for cyber situational awareness analytics and training.”

The Australasian Simulation Congress is one of the largest international conferences to advance the research, development, and use of simulation technologies and practices in Australian industry, academia, and government. Yang discussed current work and results of research in network attack simulation and modeling. His work has universal applications for those in the field of preventing network attacks that continue to evolve and become more sophisticated. Automating the process of recognizing attack strategies, at their earliest stages, can be used to successfully mitigate attacks through modeling, simulation and prediction, he said.

“Those at the conference were looking for up-to-date research and real-world skills in analysis and modeling to determine predictive, rather than reactive, actions that can be applied to day-to-day operational practices,” said Yang. He shared results of research from the National Science Foundation and National Security Agency for two cyber security projects in which his team produced an algorithm that generates “attack models” to differentiate one attack strategy from another that can then be extrapolated to reveal additional attack scenarios that may or may not be known before, Yang explained.

“The algorithm is part of a larger process, but an important element in our work that helps us fine tune the key characteristics of attack strategies. It is like a ‘tunable knob’ to synthesize and simulate plausible attack scenarios.”

Yang has also been part of a three-phased research project through IARPA-CAUSE—the Cyberattack Automated Sensor Environment program to research and develop multi-disciplinary methods that forecast cyber-incidents as part of the Leidos ELLIPSE teams. Yang’s work will focus on using data from social media and other non-conventional indicators to generate early warnings of cyber incidents. This builds upon his work in the area of predictive network attack modeling. Yang is working with Katie McConky, assistant professor of industrial and systems engineering in RIT’s Kate Gleason College of Engineering, on the project. Their collective work expertise on data analytics, information fusion and machine learning focuses upon developing and testing new, automated methods that forecast and detect cyberattacks significantly earlier that existing methods under the IARPA-CAUSE program.