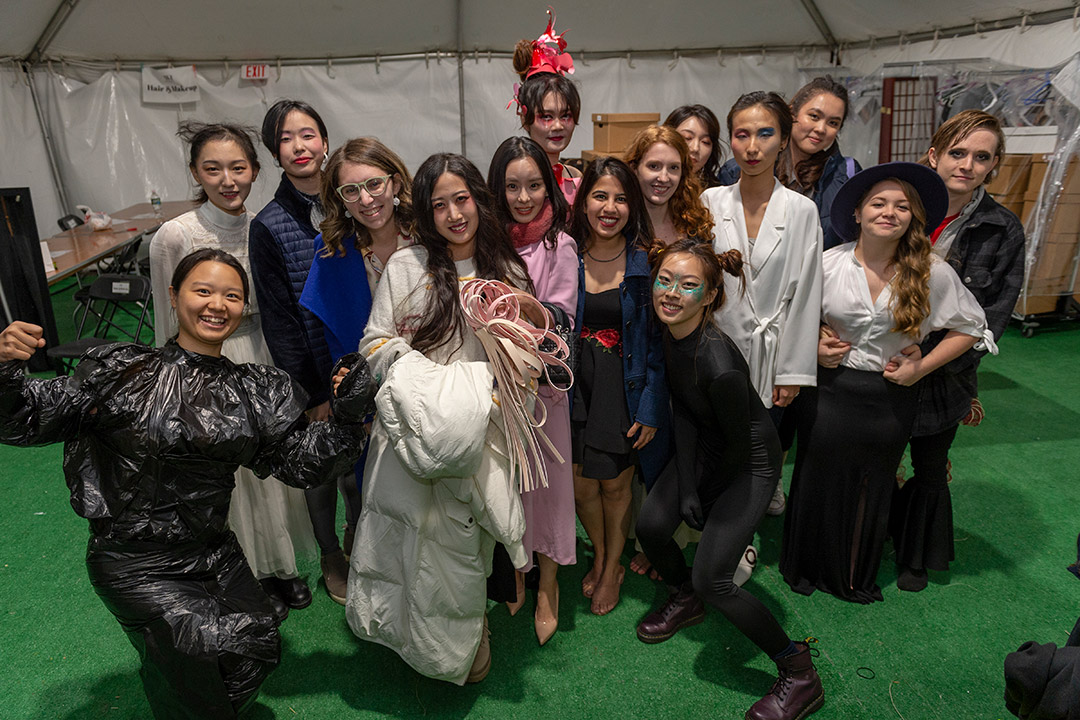 Thirteen students and two alumni from RIT’s School for American Crafts in the College of Art and Design took to the runway in front of a sold-out crowd during the 10th annual Fashion Week of Rochester, an annual fundraiser benefitting The Center for Youth.

RIT’s growing role at an annual event celebrating fashion in Rochester has become an ever-flourishing part of the metals and jewelry design program in the School for American Crafts, inspiring current students and alumni to make both stunning creations along with important industry connections.

A dazzling demonstration of technology, art and design fusing together was on full display during RIT’s sixth consecutive year participating in Fashion Week of Rochester. In all, 13 students and two alumni from RIT’s School for American Crafts (SAC) in the College of Art and Design took to the runway in front of a sold-out crowd under a big tent next to Rochester’s Midtown Athletic Club.

“I continue to be impressed by the high level of creativity and the significant effort that our students put forth in support of this project,” said Len Urso, the Ann Mowris Mulligan Distinguished Professor in SAC. Urso’s “Project Runway” course was borne out of RIT’s initial participation in Fashion Week back in 2013. “I could not be more proud.” 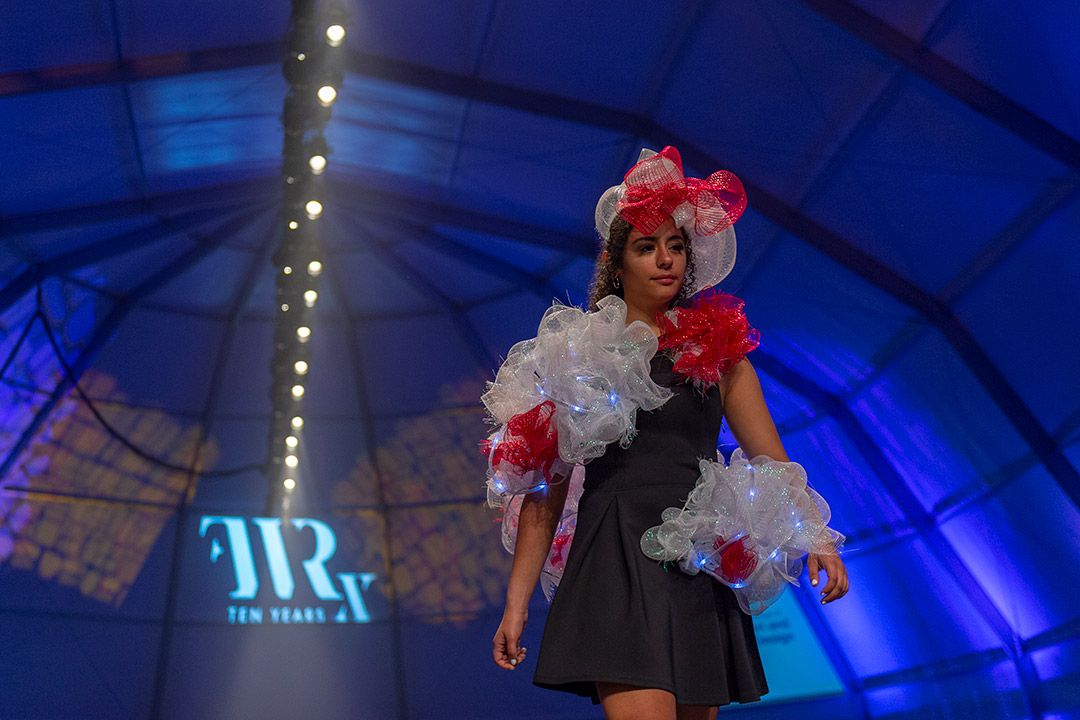 One of his students—Alex Soule, a fourth-year metalsmithing student from Penfield, N.Y., and a leader for this year’s Project Runway—said RIT has developed a reputation for “edgy” wearable designs that have wowed audiences over the years.

“The whole idea of the project is to let students create what they want, build the line-up based on the colors and the forms that they have created, and match the music with all that as well,” Soule said. “This year, we highlighted a lot of bold contrasts, particularly reds and whites.”

She created her piece from multi-colored gardening netting and wire to create continuously flowing forms. “I was going for a whimsical kind of message with my organic piece,” said Soule, who modeled her creation as well. “It’s a fun opportunity to wear the piece that you designed because you know what it embodies and you can show that in your movements. I modeled my work last year as well.”

RIT has become renowned for pushing innovative creativity at Fashion Week, with avantgarde wearable pieces. This year, as in the past, students employed a wide variety of materials—some recycled—to design their pieces, including netting, fabrics, foam, glass, wood, paper, plastic and foil.

“I wanted my concept to represent androgyny and the fluidity of human expression,” Werner said. “I think it’s a super relevant issue today, people wanting to express themselves the way that they want to, even if not everyone agrees with it.”

Maddy Schoenfeld, a fourth-year year metals and jewelry student from West Milford, N.J., created what she described as “a post-modern piece” made of neograin foam on top of a larger piece of foam “creating a mathematical and parametric piece with the same pattern repeated hundreds of times.”

“It’s a double möbius strip and it opens to create these flowerlike shapes,” said Schoenfeld, who helped to direct both this and last year’s show. “I wanted people to see that it’s mathematical, but also super fluid and organic.”

Urso, an internationally recognized and award-winning artist, said the annual showcase of RIT talent at Fashion Week of Rochester has allowed students and alumni from regions such as India, China, Kuwait, Korea as well as the United States demonstrate their incredible creativity and talent.

“I always try to bring in professionals from the industry because my scorecard is where they go from here,” said Urso, who noted that the program has sent dozens of graduates to Tiffany & Co. and elsewhere.

Since RIT’s participation began six years ago, nearly 100 metals and jewelry students have created pieces modeled on the runway at Fashion Week, which celebrated its 10th year in October. This also marked the third consecutive year in which Nancy Munson, wife of RIT President David Munson, walked the runway donning student-designed jewelry.

“Once again, I was very happy to have Nancy Munson join our presentation, as she has become an important mentor to the young women in the jewelry design program,” Urso said.

“Project Runway has inspired significant growth in my students’ self-esteem and organizational leadership,” he added. “As an educator, I am thankful to have Fashion Week of Rochester become an important event within the RIT community.”