Protectors of a Diverse History 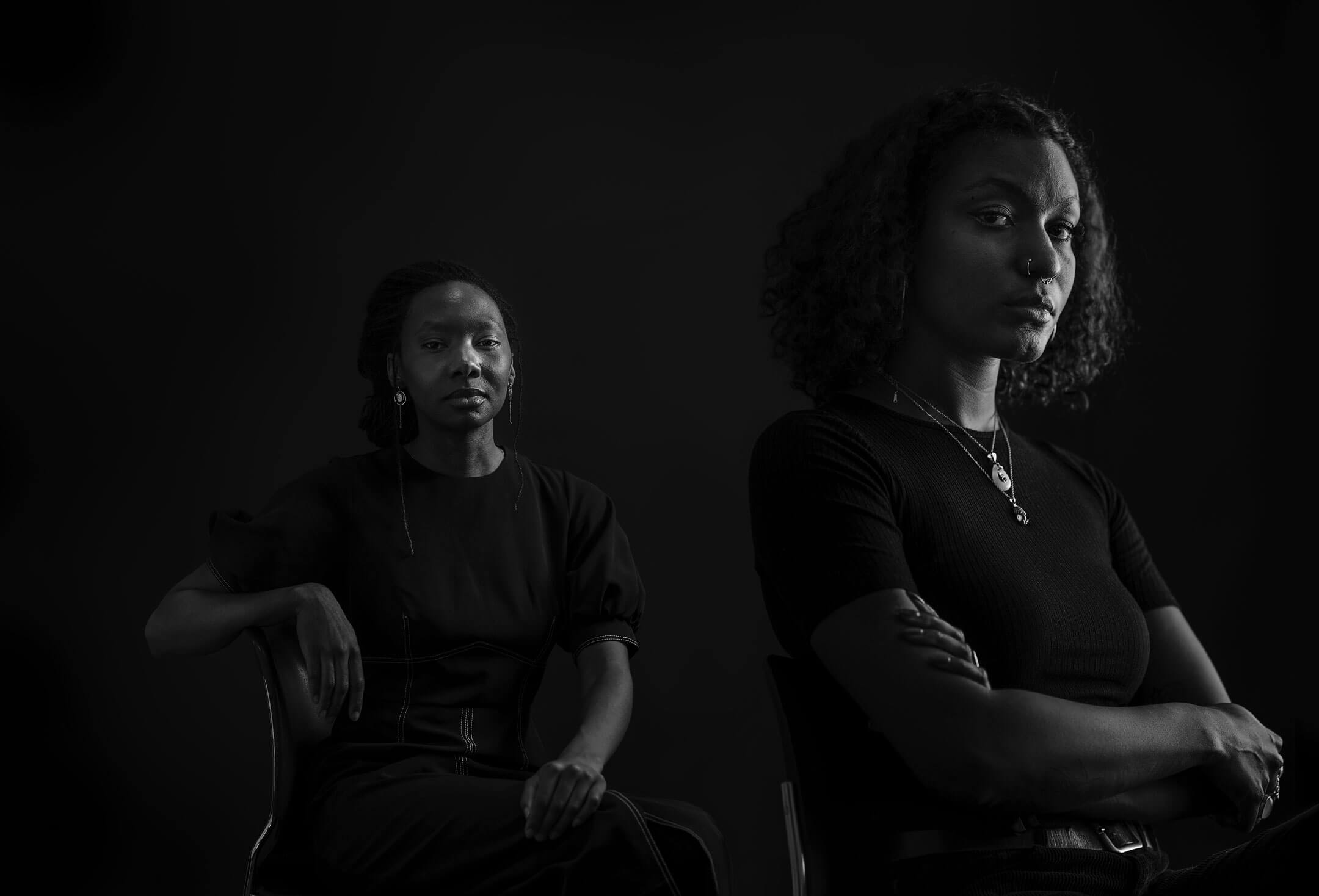 Protectors of a
diverse history
Story by Shelly Meyer Photos by Scott Hamilton ’89, A. Sue Weisler, and Caitlin Abrams

Alumni are redefining museum studies for all voices

The field of museum studies is changing. Not only are the people working in nationwide cultural institutions becoming more diverse, but the narratives told within those institutions are more inclusive and equity-focused.

“Our faculty and, in turn, our students and alumni recognize that crafting and sharing stories representing diverse perspectives is a critical method for understanding our communities, one another, and ourselves,” Decker said. “Our program strives to provide opportunities for students to engage in inclusive and equity-focused coursework and experiential learning opportunities.”

In recent years, the program also has seen an increase in alumni who pursue careers in places that are deeply committed to diversity, equity, inclusion, and access.

Kayla Jackson ’18 and Leah Green ’20 are two examples. Both are pursuing community-focused work that highlights Black history in their area.

Following are their stories. 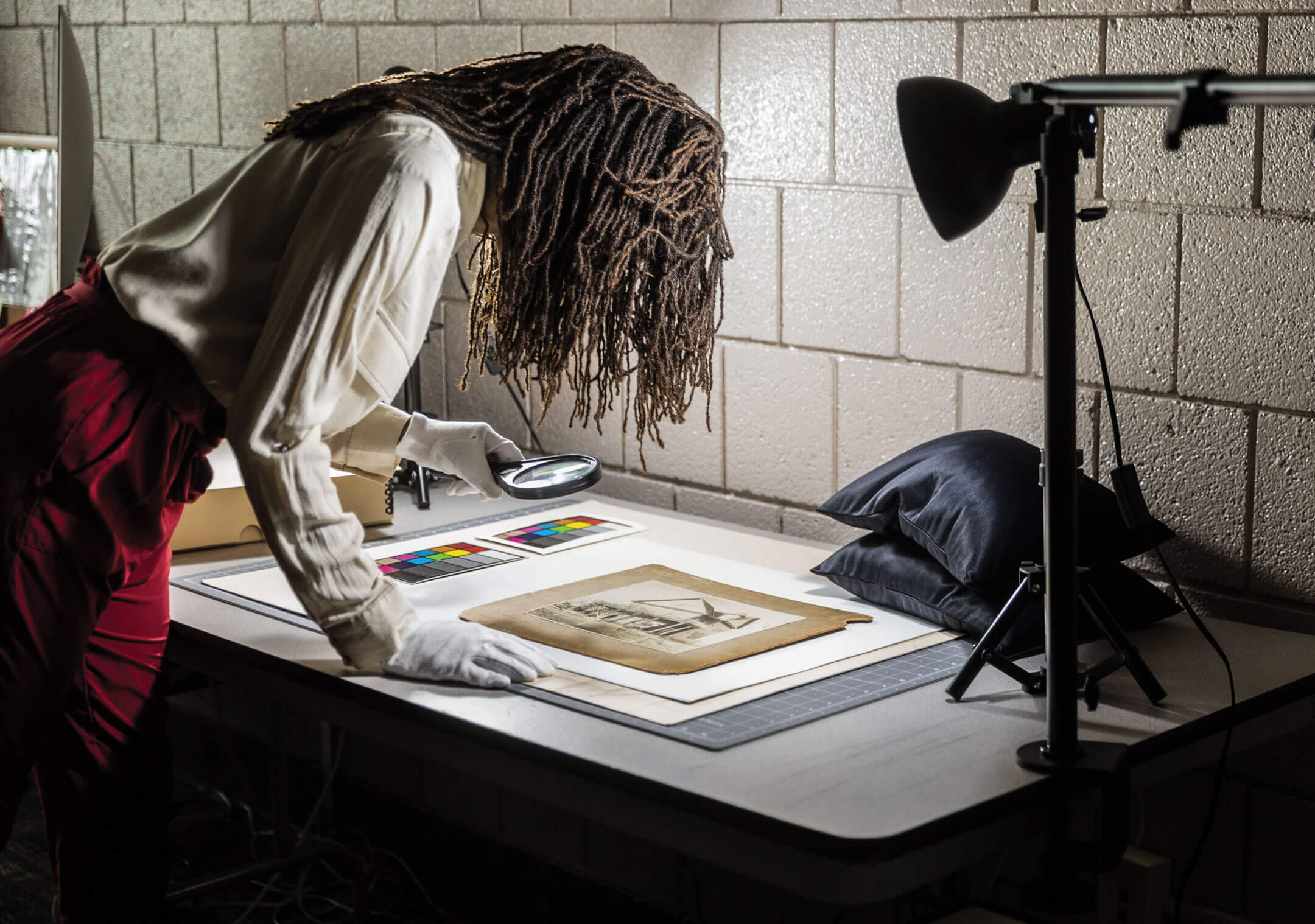 When she learned about the murder of George Floyd, Kayla Jackson was compelled to make a difference. She joined AmeriCorps and moved to St. Paul, Minn., to fulfill a term of service helping children in the area learn to read.

When her term ended in the summer of 2021, Jackson, who by this time had lived in Missouri, California, and three upstate New York cities, decided to stay in St. Paul.

“This area has a very close-knit, vibrant Black community—and I say Black because not every Black person identifies as African or American,” she said. “I connected with people here.”

Jackson got a job as archivist at the Hallie Q. Brown Community Center, helping to preserve the history of the Rondo neighborhood. Rondo once housed 85 percent of the city’s Black population before the state seized their homes and destroyed the neighborhood to make way for Interstate 94 in the 1950s. When that happened, much of St. Paul’s Black history was either destroyed or moved.

The Hallie Q. Brown Community Center started the Community Archive Project in 2016 to preserve Rondo’s history. Community members are asked to donate photos, artifacts, and documents to be preserved in the archive.

The project was volunteer-based as part of the Andrew W. Mellon Foundation’s programs to support community-based archives. It’s Jackson’s job to process, organize, and digitize the materials to preserve and make them accessible to the community. Virtual and in-person exhibits, as well as an online catalogue database containing more than 3,000 searchable objects, are planned to be made available to the public this spring.

Reflecting on the importance of this work, Jackson explained that often in marginalized communities, especially the Black community, there is a lack of trust in museums.

“So the histories are told through a very white lens, and the materials that museums collect are only a fraction of what the multi-faceted Black experience is. There are so many Black people I know who have beautiful photographs that are truly one-of-a-kind but they don’t feel comfortable giving them to a museum, so they are kept at home in less than ideal conditions for long-term preservation.”

Some of the historic materials in the archive include a signed portrait of journalist and civil rights advocate Ida B. Wells, and handwritten journals from the Ladies Aid Society of Pilgrim Baptist Church, which include descriptions of speeches made by Nellie G. Francis, a suffragist, civic leader, and civil rights activist.

There is also a photo of an interracial couple on their wedding day, taken a decade before the historic Loving v. Virginia case, and a photo of a Black teenage man kissing a white teenage woman on the cheek a year after the murder of Emmett Till. 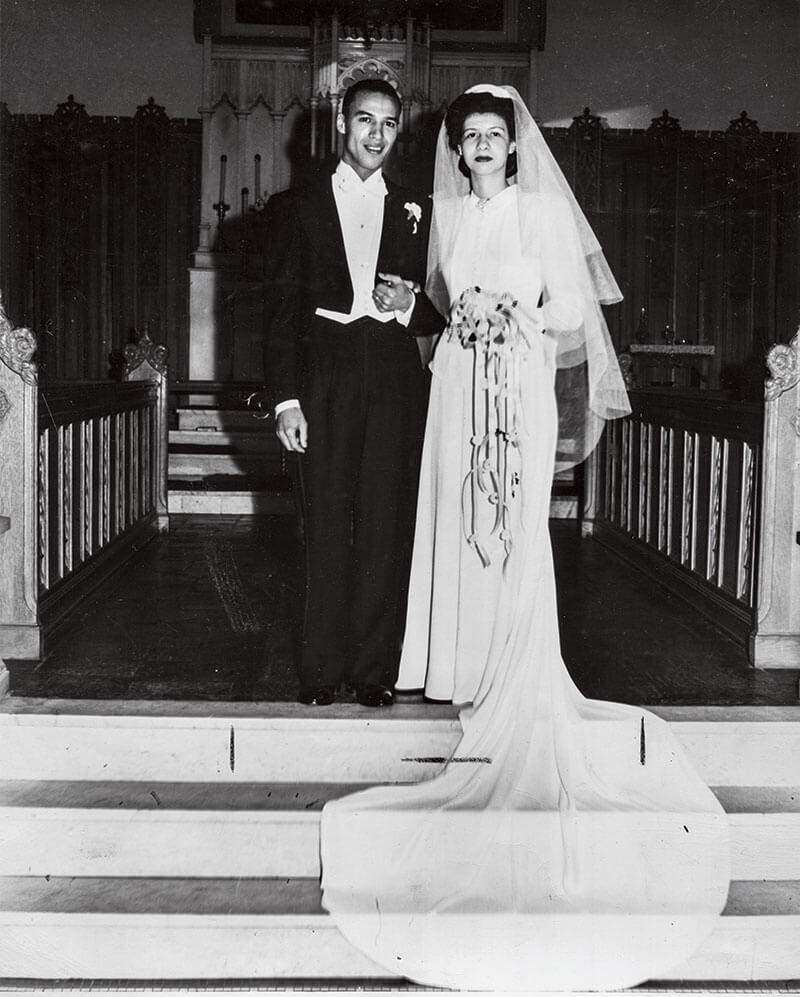 Wedding day
This photo of an interracial couple was taken a decade before Loving v. Virginia. 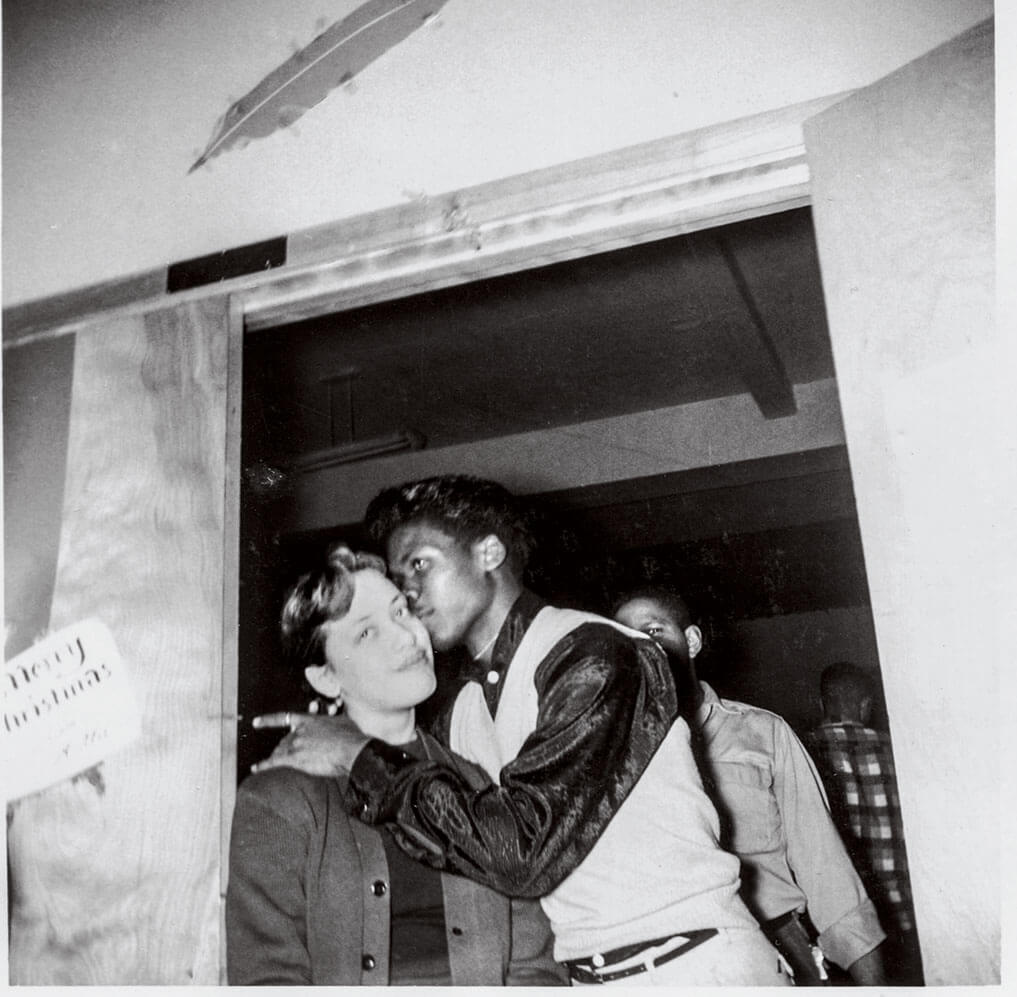 Kiss
This photo of a Black teenage man kissing a white teenage woman was taken a year after the murder of Emmett Till in 1955.

Some are simply family photos or pictures of friends spending time together. All of these photos are important, Jackson said.

“I know for me, I didn’t get to see a lot of pictures of Black people, and if I did, they were in chains or enslaved. These photos are different. It’s important to see photos of Black people simply existing.”

Now, it’s Jackson’s goal to make sure others can share in this experience. By preserving and digitizing these historical documents, she is effectively restoring the lost history of the Black community in St. Paul.

Getting to this point wasn’t easy, though, she said. As a Black woman working in a role traditionally held by people who don’t look like her, Jackson ran into barriers.

There were times during her job search in which her expertise was immediately doubted despite her education and extensive experience. Jackson views her work at Hallie Q. Brown as a proving ground and hopes to encourage other aspiring archivists of color to explore the field.

“There aren’t many Black archivists, so I’m a bit of an anomaly in this field. But representation matters. It’s important that children are able to see people who look like them in these roles. It’s also crucial that Black people and people of color are present when history is being told or preserved from the outset, so we can tell our own stories.” 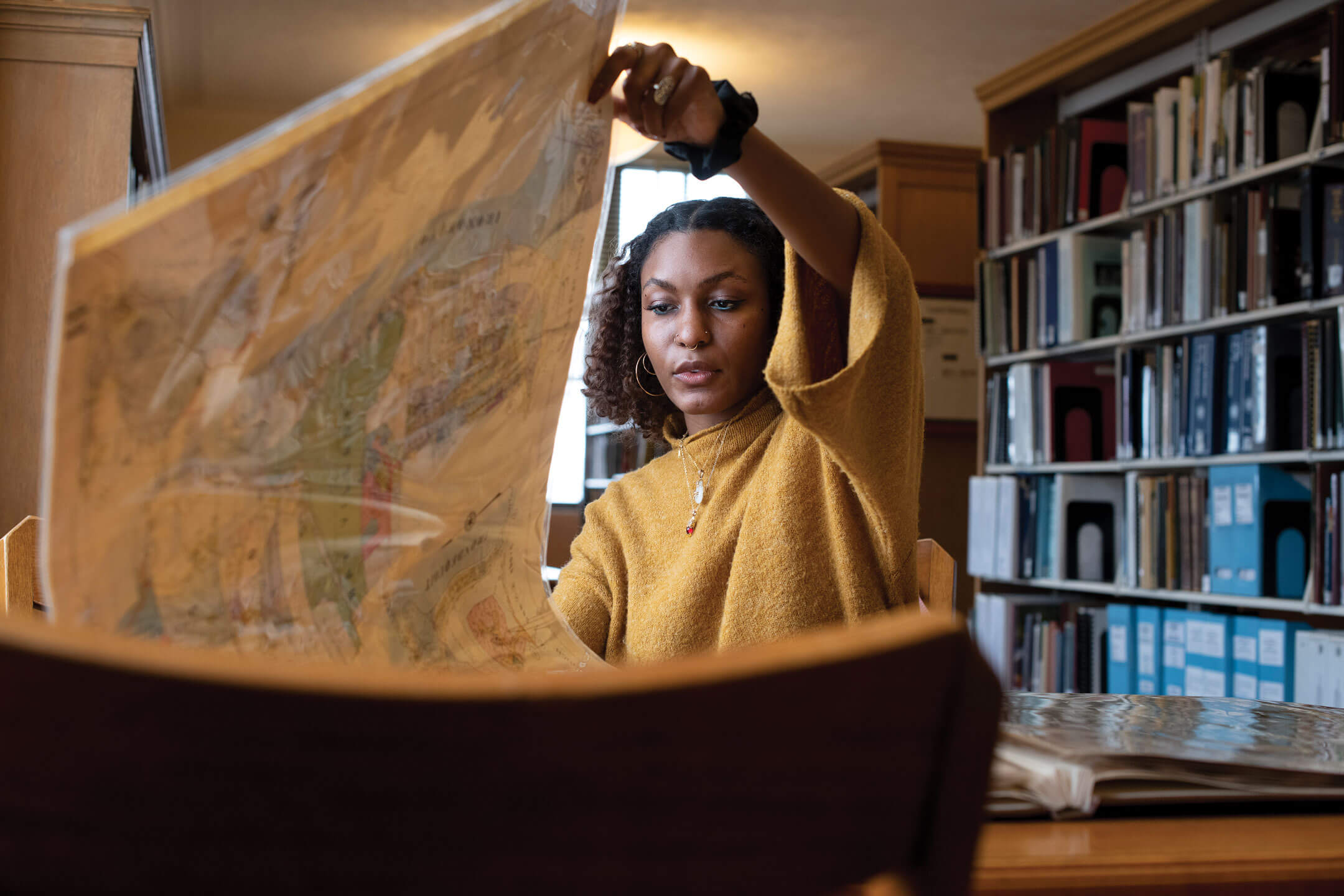 As a kid growing up in Brooklyn, N.Y., Leah Green often visited the Brooklyn Museum with her mom and dad. She enjoyed those visits, but noticed that the art she saw and the stories being told weren’t depicting people who look like her.

As a young Black girl growing up in a neighborhood predominantly comprised of people of color, she wondered why the artists she knew in her community weren’t being represented.

When she took a career center quiz as a first-year student at RIT and was matched to the museum studies program, Green’s interest was piqued.

“I love museums but it just didn’t connect in my head that that’s something I could do as a career. I started to think about how there aren’t many museums that cater to the communities that they’re in, and I think it’s so important to make museums more accessible and less intimidating to their communities. So that’s been my mission.”

Green is already making an impact as a genealogy specialist for the Rochester Public Library’s Local History and Genealogy department. She specializes in African- American genealogy, helping patrons find information about their ancestry.

She’s also taken on two side projects. First as a project manager for the Pathstone Foundation’s Anti-Racist Curriculum Project, an initiative committed to providing K-12 students and educators with instructional resources about the local history of structural racism and civil rights in Monroe County.

Green supervises a team of RIT and University of Rochester students who are building a prototype interactive website that will house and organize anti-racist curriculum materials. They are also working on a project called Resistance Mapping, a digital portal into space-based racism and resistance in Rochester. When they’re finished, these map-based modules will visually depict the effects of redlining in the community and the areas that resisted these changes, Green said.

“I moved from Brooklyn to Rochester as a child and went through the Rochester City School District system,” she continued, “and I had a passion for this project because I wasn’t really taught about what happened here in Rochester. I knew about redlining, but I didn’t know that there were communities like the 19th Ward and others that fought back and tried to preserve the neighborhood and keep their culture.”

Green is also working as the collections and curatorial lead for an upcoming exhibit by Rochester’s Teen Empowerment Youth History Ambassadors, called “Clarissa Uprooted: Youth and Elders Uncover the Story of Black Rochester.” 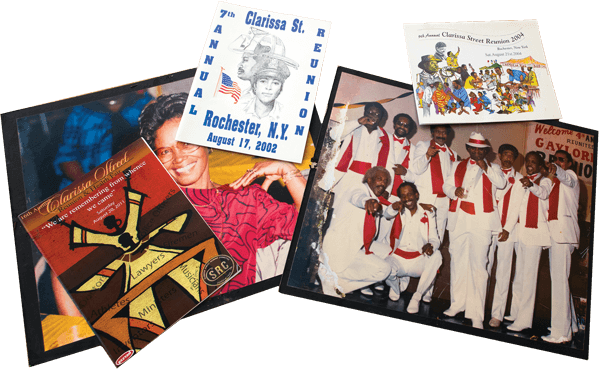 Clarissa Street
An upcoming exhibit will uncover the hidden story of a Rochester neighborhood created, in part, by redlining.

The exhibit, scheduled to open at RIT’s City Art Space in June, will uncover the hidden story of Clarissa Street, a cultural and residential district that was created in part by redlining. Green’s job is to collect oral histories, newspaper clippings, and other materials to tell the story of how the community thrived due to resilience and resistance only to be displaced by Interstate 490 and urban renewal in the 1960s.

Green hopes that her work in the Rochester community will help make museum studies less intimidating and more accessible, she said.

“Museums are here to serve the community and that involves everybody, not just a certain group of people who have always been interested in museums. I know a lot of my peers were like ‘I don’t understand how you’re even doing that. It’s so catered toward rich, white people,’ and I would say to them ‘no, it doesn’t have to be. If you have access to it, you can understand how it can connect with you and you can change that.’ I think that that’s really important.”