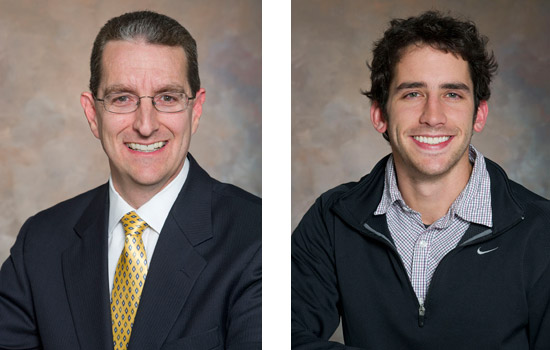 Morse, a Penfield resident and 1986 accounting graduate from RIT’s E. Philip Saunders College of Business, began his employment with the university in 2004. In the community, he has served 13 years as a member of the Rochester School for the Deaf Board of Directors, including two years as board president, and he volunteers for the Susan B. Anthony House, Shepherd Home, and the New York Museum of Transportation.

On campus, Morse serves on the National Technical Institute for the Deaf Foundation Board, the PEPNet Northeast Advisory Board and the Saunders College of Business Accounting Advisory Board. He also volunteers for RIT K-12 preparatory programs and the Fund for RIT.

“We have had numerous discussions on the status of deaf education,” writes Buckley, “and I respect his perspectives as the parent of a deaf child. But Steve is far from an ‘armchair quarterback’ offering opinions. He is an active participant who sees areas where there is a need and offers his significant expertise and time. Additionally, Steve’s record of services to the Greater Rochester community is outstanding.”

David Kelbe, the Bruce R. James ’64 Distinguished Service Award winner, earned his bachelor’s degree in imaging science from RIT in 2010. Kelbe travels internationally to volunteer in various capacities. Most notably, he is affiliated with the St. Matthew’s Orphanage Center in Myanmar, where he has served as a teacher, mentor and financial supporter for more than two years.

In her nomination of Kelbe, RIT associate professor of photojournalism Loret Steinberg writes: “The love of the orphan children changed David’s whole outlook on life. Everything that he does now, from school to leisure to service, is permeated by a desire to share that same generous, self-giving love he found in Myanmar.”

Locally, he volunteers at Dimitri House, a men’s emergency homeless shelter, and he works with refugee children at Mary’s Place. He also serves as a teaching assistant and mentor on the RIT campus.

As part of the March 20 award ceremony, Daniel Meyers, president of the Al Sigl Center, will discuss the importance of public service during his keynote address.

RIT vice president emeritus Alfred Davis started a $50,000 endowment to fund the awards program. Each recipient will have the privilege of designating the endowment income to a beneficiary of his choice.

The Four Presidents Distinguished Public Service Award Fund was created by Davis on the occasion of the 65th year of his association with RIT to commemorate the dedication of the last four RIT presidents - Mark Ellingson, Paul Miller, M. Richard Rose and Albert Simone - in their service to the Rochester community. The award is presented annually to a member of the RIT faculty or staff whose public service and commitment mirrors that of the four presidents who worked with Davis. The Bruce R. James ’64 Distinguished Public Service Award is presented annually to an RIT student and commemorates the public service of Bruce James, chairman emeritus of the RIT Board of Trustees.