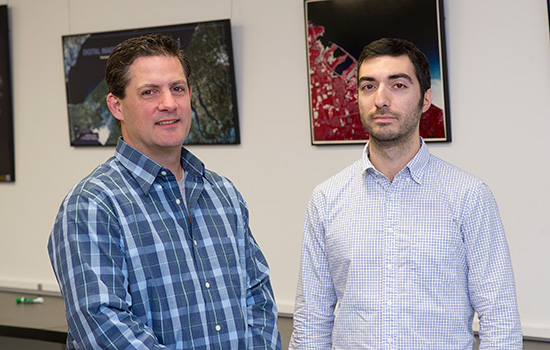 Software developed by Aaron Gerace and Matt Montanaro, senior scientists at RIT’s Chester F. Carlson Center for Imaging Science, improves the accuracy of the Landsat 8 data. NASA funded their research with an $86,000 grant.

NASA and the U.S. Geological Survey have approved the algorithm that will automatically process and correct Landsat 8 images and refine reprocessed data.

“Matt and Aaron were the developers, tuners and testers of the algorithm and its parameters,” said Brian Markham, Landsat Calibration Scientist at NASA Goddard Space Flight Center. “The algorithm provides clear improvement in the image quality of the TIRS data and the ability to get accurate temperature measurements of Earth targets, such as lakes, particularly those surrounded by areas of different temperatures. This is important when you are trying to determine if targets are warming or cooling over time.”

The effects of stray light on Landsat 8’s thermal band measurements were detected shortly after the mission launched in February 2013. Defective optics in the thermal infrared sensor allow unwanted light to enter the optical system and disrupt accurate measurements. According to Gerace and Montanaro, errors have reached as high as 10 degrees Celsius in areas with extreme temperatures like Antarctic or desert regions. Mid-range surface temperatures more typical of the United States are less affected by these wide margins of error, they said.

“Everything you look at with Landsat 8 in the thermal infrared bands appears warmer than it should,” Gerace said. “By implementing this fix, people can do accurate science because the temperatures coming from whatever they’re looking at is correct now.”

A new method to remove the effects of the stray light in the data became a high priority when standard calibration techniques failed to accurately adjust the imagery.

Montanaro had worked for NASA Goddard on the Landsat 8 calibration and TIRS instrument teams. The malfunction was traced to a hardware defect in the telescope, he said. “You would have to replace the telescope to fix this problem.”

Gerace and Montanaro went beyond the quick fix of subtracting out the average error from the Landsat 8 imagery and developed a data processing algorithm to estimate the precise amount of extra light in each scene.

“They performed a great deal of data analysis to convince the Landsat Science Team, a tough crowd, that their algorithm significantly and consistently improved the accuracy of TIRS data products,” Irons said.

The software correction anticipates a concern surrounding the future Landsat 9, slated to launch in 2020.

Montanaro will support the Thermal Infrared Sensor 2 for Landsat 9. “From headquarters to technical people, the No. 1 thing is, how do we prevent stray light from Landsat 9?”

NASA is implementing a hardware fix to the telescope for TIRS-2 before the launch, he noted.

A scientific paper validating Gerace and Montanaro’s stray light correction for the Landsat 8 Thermal Infrared Sensor is currently under review.