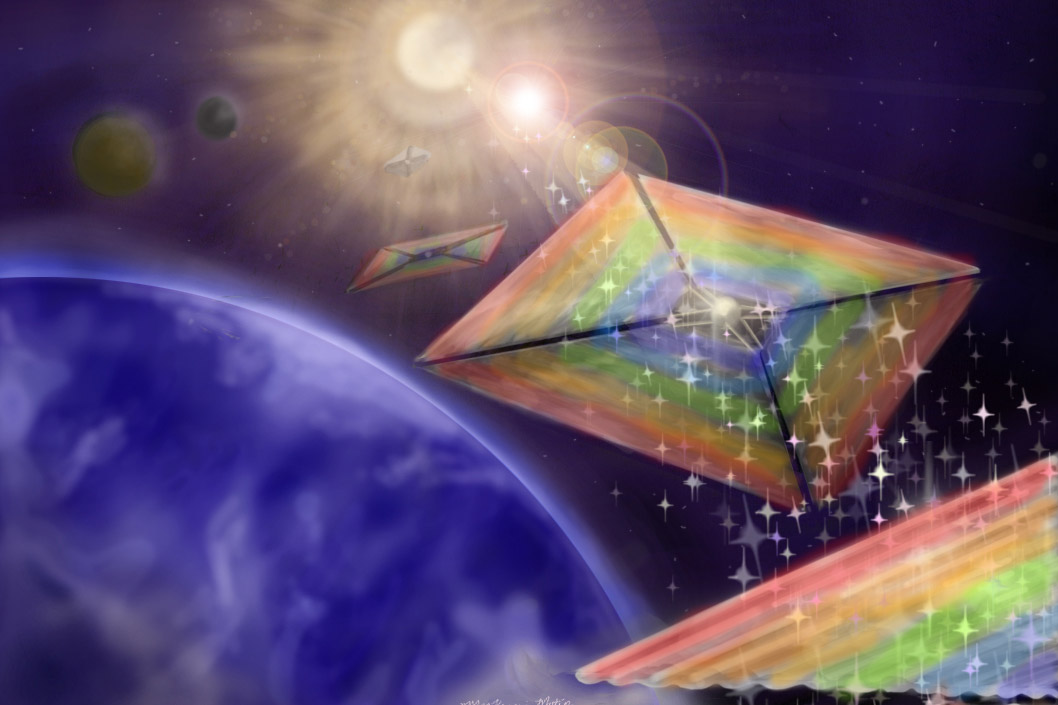 Diffractive solar sails, depicted in this conceptual illustration, could enable missions to hard-to-reach places, like orbits over the sun’s poles. 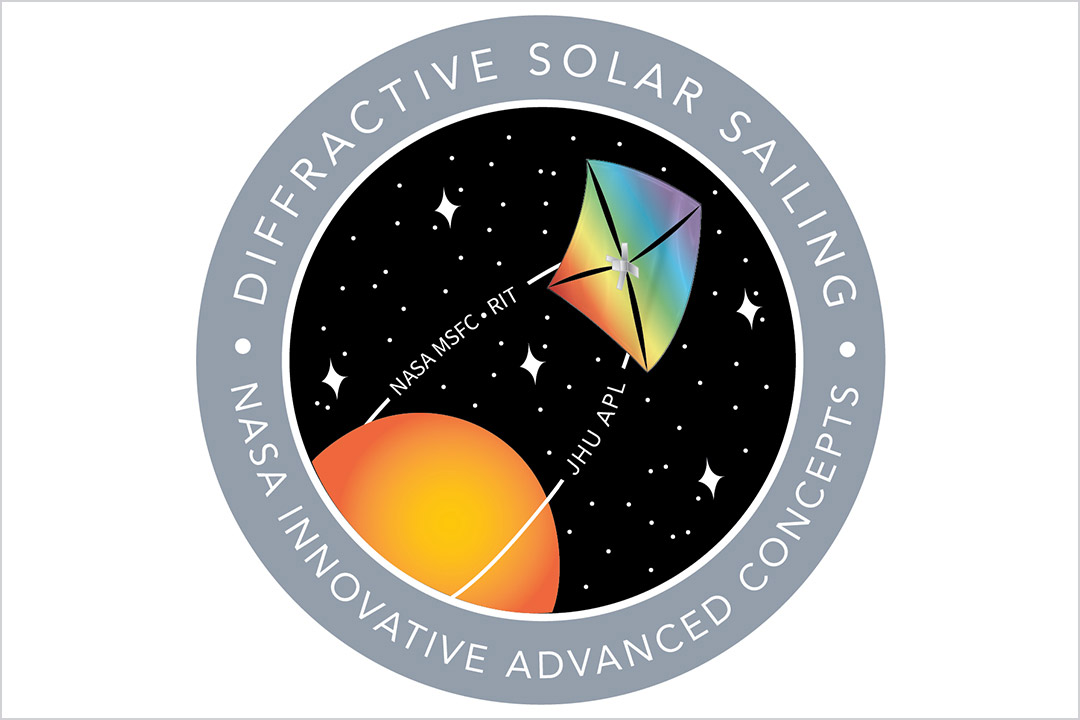 The feasibility of the concept was previously studied under NIAC’s Phase I and Phase II awards, led by Professor Grover Swartzlander from RIT’s Chester F. Carlson Center for Imaging Science, who continues as a co-investigator on the project. While reflective solar sails have been discussed as a possibility for space travel for decades and the first spacecraft to use the technology launched in 2010, the project team believes that diffractive solar sails hold more potential for reaching challenging locations such as the sun’s north and south poles.

“In phase II of the NIAC program, we demonstrated that a diffractive sail could achieve the mission with a much smaller sail compared to a reflective sail,” said Swartzlander. “This diffractive sail we’re proposing would also be in general less complicated because it can be sun-facing and it’s going to have less of an awkward angle that has to be managed. The combination of radiation pressure and solar gravity work to enable us to get to interesting orbits around the sun.”

The new Phase III award will give the research team $2 million over two years to optimize the sail material and perform ground tests. RIT will receive nearly $500,000 of the grant, which it will use to purchase equipment and fund graduate and undergraduate student researchers. Johns Hopkins University Applied Physics Laboratory and RIT are also collaborating on the project with NASA’s Marshall Space Flight Center and BEAM Co., a Florida-based company that develops advanced optical technologies and materials.

“Diffractive solar sailing is a modern take on the decades-old vision of lightsails. While this technology can improve a multitude of mission architectures, it is poised to highly impact the heliophysics community’s need for unique solar observation capabilities,” said Dubill. “With our team’s combined expertise in optics, aerospace, traditional solar sailing, and metamaterials, we hope to allow scientists to see the sun as never before.”

Swartzlander said he hopes that within a decade there could be a demonstration mission to put diffractive solar sails to the test.

“As we venture farther out into the cosmos than ever before, we’ll need innovative, cutting-edge technologies to drive our missions," said NASA Administrator Bill Nelson. “The NASA Innovative Advanced Concepts program helps to unlock visionary ideas—like novel solar sails—and bring them closer to reality.”

U.S. Sen. Charles Schumer said, “I was proud to have helped secure this investment that will be used by RIT researchers to bolster NASA’s development of new cutting-edge solar space technology. I applaud RIT for being a key contributor in these efforts that will blaze a new trail in space travel and yield new understandings of our solar system.”

“Rochester Institute of Technology has a long-standing reputation as a national leader in scientific research and innovation,” said Sen. Kirsten Gillibrand. “I’m proud to have worked to secure this grant funding from NASA to advance this transformational solar sails research, and I’ll keep fighting to bring federal dollars to New York’s academic institutions.”

“Once again, Rochester Institute for Technology is proving their national leadership in high-tech innovation,” said Congressman Joe Morelle. “I want to congratulate RIT on this exciting collaboration with NASA’s Innovative Advanced Concepts program, which will advance space exploration through scientific discovery. I was proud to support this proposal and I look forward to RIT’s continued growth and success through this partnership.”