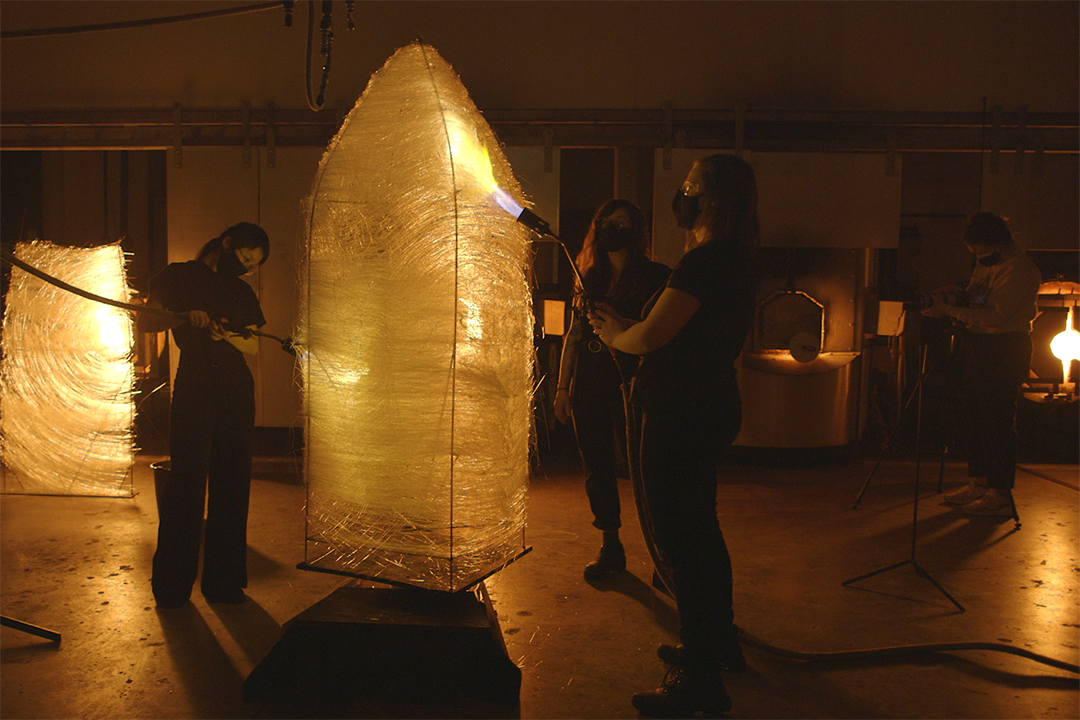 A group of RIT glass artists worked together to weave a large glass sculpture in the Hot Shop.

Two artists from RIT’s Glass MFA program are showcasing their fusion of glass artistry and video in an international film festival this spring.

Ying Chiun Lee ’21 MFA and Madeline Rile Smith ’20 MFA, now an adjunct faculty member in the program, were selected for North Lands Creative’s “Glass, Meet the Future Film Festival,” running March 20-April 4. Scotland-based North Lands Creative is a prestigious center for the study and development of glass as an artform.

The festival is a presentation of short films focused on the medium of glass, directed by female-identified and non-binary artists.

“There is so much more to glass than focusing on static objects,” Smith said. “I like to embrace the ephemeral, action-based qualities of glass — exploring time, movement and interaction with the body — and video is the perfect medium for that.”

“Most of my works invite viewers to look into the unnoticeable detail of art making,” Lee said. “Instead of showing glass in its final state, I focus on the transformation of this material. The heat of glass is astonishing but ephemeral. I use cameras with microlenses to capture the sensual moment of the making.”‌ 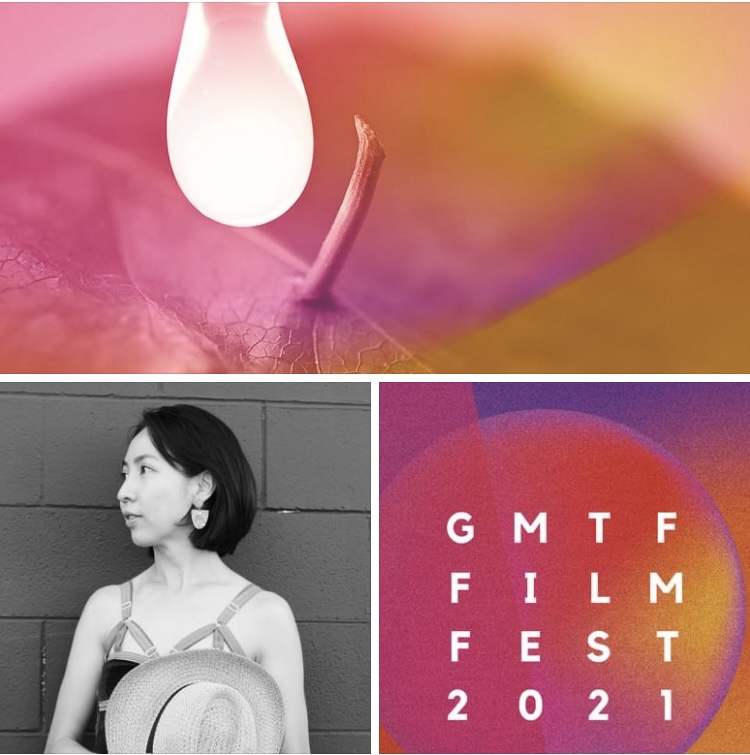 Lee’s film, “Seduction,” visualizes a flirtatious exchange, with a hot glass rod teasing a leaf by coming in close contact with it before desire gives in and burns it.

“The game of flirting can be threatening and dangerous but irresistible,” Lee said. “This work visualizes the seduction, as the hot borosilicate glass rod plays the role of the seducer; the leaf, the seducee.”

Lee has been able to explore video as a medium in part because of RIT’s Photo Cage, a repository of industry-standard photography equipment available for students, staff and faculty to check out.

“RIT provides me with great photography equipment that allows me to explore glass with film,” Lee added. “In this festival, I am thrilled to see other artists around the world who also approach glass the same way as me.”

Meanwhile, Smith is screening two featured pieces, “Timeless” and “Woven Light,” which is among six artworks commissioned by the festival for inclusion in associated programming.

Drawn to how accessible the medium is, Smith started using video to document her performance art a few years ago.

“I’m interested in the way glass interacts with the body, and ways it can connect people,” Smith said. “I love video as a medium because you can put the viewer’s perspective exactly where you want it.”

“Timeless” is an interdisciplinary collaboration between Smith and Laura Lentz, College of Liberal Arts adjunct faculty and director of the RIT Flute Ensemble. Smith created the film based on Lentz’s flute performance of a composition written by Kari Sundet. 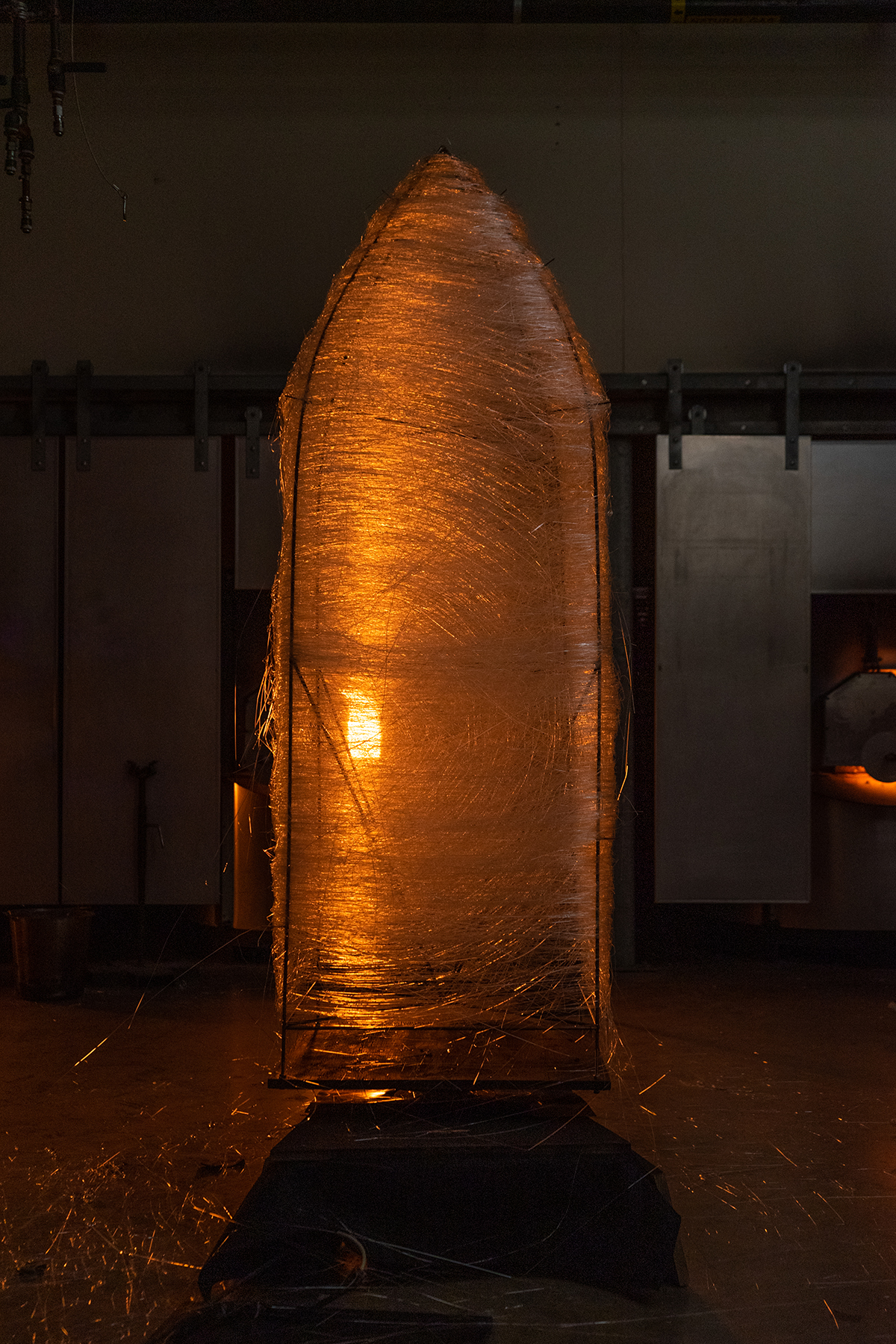 Smith directed the performance of a group of artists weaving a large, luminous glass web structure in the Glass program’s state-of-the-art Hot Shop. Visual Media student Trisha Pickelhaupt ’21 shot the film and edited it with Smith.

“It was a great collaboration with Trisha and she helped me realize the film beautifully,” Smith said.

The four-day production of “Woven Light” doubled as a refreshing reminder of previous communal glassworking projects for the participating RIT Glass (MFA) artists. Smith, Lee, Kayla Cantu ’20, Rinoi Imada ’21, Gracia Nash ’19 and Chenyue Yang ’20 were all part of the performance — some of whom hadn’t worked together since the start of COVID-19.

“We came together for the first time in a year and were able to reunite through this process,” Smith said. “It was cathartic and wonderful to experience it together. The RIT Hot Shop is a place I have grown close to over the past few years, and it was a perfect setting for the film — as a place to celebrate community and the process of making.”