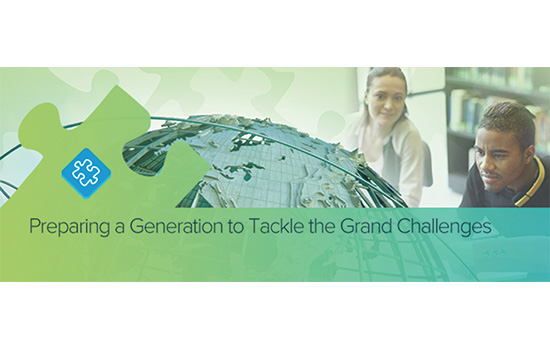 RIT has become the newest university to be designated as part of the Grand Challenge Scholars Program, a national initiative to train future engineering and non-engineering professionals to play a significant role in solving the major challenges of the 21st century.

The RIT Grand Challenge Scholars Program will be a unique pathway for students to attain degrees that increase students’ awareness of the global challenges and provide experiences and training that attune engineers to the complexity of non-technical aspects of problems, and non-engineers to the technical aspects of problems. Addressing challenges requires that they be viewed as more than technical problems, many with the need to understand that solutions must integrate cultural, social, political and human qualities, said James Winebrake, dean of RIT’s College of Liberal Arts.

“The approval by the National Academy of Engineering of RIT’s Grand Challenge Scholars Program validates our efforts to bring liberal arts perspectives to help solve the world’s most pressing problems,” said Winebrake. “To solve these problems, students need to understand not only advanced technology, but also the social, cultural, political, ethical and economic dimensions of these problems. Our new Grand Challenge Scholars Program allows students to understand and address these non-technical elements through innovative curricula and project-based work.”

Components of RIT’s GCSP includes a gateway course to introduce students to the objectives of the program as well as several activities that vary from research and interdisciplinary coursework to global, service and entrepreneurial experiences. Coursework would be a combination of general education and degree program requirements as well as those that align with the Grand Challenges.

As part of the GCSP, RIT will take advantage of several established and successful components of its educational curriculum, particularly its co-operative education program and its international campuses. Students who participate in the GCSP would work with mentors and academic advisers to ensure that their learning experience integrates technical skills with critical thinking, communication and awareness of, and respect for, diversity, said Doreen Edwards, dean of RIT’s Kate Gleason College of Engineering.

“RIT has emerged as a national leader in developing meaningful interdisciplinary curricula that integrate liberal arts with STEM education,” said Edwards. “We have confidence that these curricula will help our students succeed professionally and personally. We expect to attract student in engineering, in liberal arts, in computing and across the university who see their education as a means of both achieving their own personal goals and improving the world in which they live.”

The gateway course was developed last summer, and students were enrolled this past fall as part of a pilot of the larger program. Students interested in participating can apply to the program in their first semester, but no later than their fifth semester, and will detail how they could contribute to one of the Grand Challenges. Projects being done by the GCSP Scholars are expected to be displayed at the annual Imagine RIT: Innovation and Creativity Festival, where students will have the option of publicly presenting their accomplishments.

Led by faculty in the Kate Gleason College of Engineering and the College of Liberal Arts, the GCSP program aligns with the strategic direction of the university and its intent to develop the “T-shaped” graduate. RIT’s Strategic Plan (“Greatness through Difference, 2015-2025”) emphasizes interdisciplinary research and curricula across the entire institute. The Association of American Colleges and Universities (2015) reported that 91 percent of employers agreed that for career success, “a candidate’s demonstrated capacity to think critically, communicate clearly, and solve complex problems is more important than his or her undergraduate major.” This is reinforced by another statement indicating that 96 percent of employers value a candidate’s ability to “solve problems with people whose views are different than their own.”

“RIT has emerged as a national leader in developing meaningful interdisciplinary curricula that integrate liberal arts with STEM education,” said RIT Provost Jeremy Haefner. “We have confidence that these curricula will help our students succeed professionally and personally.”