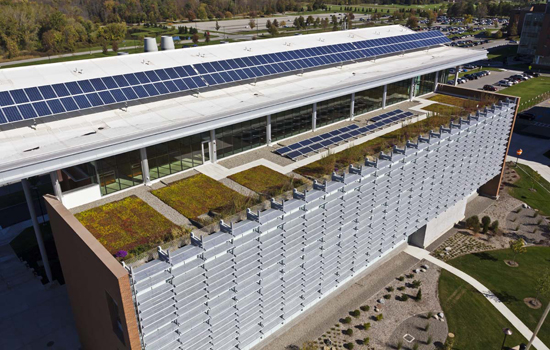 The Golisano Institute for Sustainability is part of a winning coalition named by President Obama on Monday to head up a new smart manufacturing initiative to bolster advanced manufacturing across the United States.

Rochester Institute of Technology’s Golisano Institute for Sustainability (GIS) is part of a winning coalition named by President Obama on Monday to head up a new smart manufacturing initiative designed to bolster advanced manufacturing across the United States.

The institute, which will be headquartered in Los Angeles, Calif., brings more than $140 million in public-private investment from leading universities and manufacturers to develop smart sensors for use in advanced manufacturing. RIT will commit $50,000 as a consortium member over the next five years.

RIT is one of only three universities in New York state that will be part of the consortium of nearly 200 partners from across academia, industry and nonprofits—hailing from more than 30 states. Through the institute, information technology leaders will work with manufacturers in energy-intensive industries to manufacture more while spending less and using less energy.

“RIT has a long heritage of helping U.S. manufacturers remain competitive in a global marketplace,” said Nabil Nasr, associate provost and director of GIS. “As a proud academic partner of the Smart Manufacturing Leadership Coalition, we will enable transformational improvements in energy efficiency and U.S. manufacturing productivity, while also creating highly skilled jobs, supporting the current and future workforce, and increasing the quality of life. We look forward to making a critical impact on U.S. manufacturing.”

About the new smart manufacturing institute

Thermal processing for food, for example, is typically energy intensive, using massive amounts of energy and water to give products a longer shelf life. But through the work of the smart manufacturing institute, companies can integrate small controls on the thermal processing line to monitor, adjust and improve technology to regulate and reduce energy and water consumption.

And once food is produced, smart technologies can also be used to make the packaging and shipping processes more efficient by allowing manufacturers to see data from their manufacturing line in real-time. This helps manufacturers manage products through their distribution centers and gives them more information about when products are ready to ship.

By modernizing the energy and water intensive manufacturing techniques that have been in place for decades and increasing energy efficiency, the United States can lower the cost of processing food, dramatically shrink the footprint of equipment need on a crowded factory floor and increase the efficiency of products that range from industrial motors to household appliances.

To ensure that all American businesses, regardless of their size or potential resource limitations, have the opportunity to benefit from the institute’s progress, the Smart Manufacturing Innovation Institute will employ an open-source digital platform and technology marketplace to integrate advanced sensors, controls, platforms and modeling technologies into commercial smart manufacturing systems. The institute will also provide the manufacturing communities with easy and affordable access to real-time analytic tools, infrastructure and industrial applications.

The institutes, each led by manufacturing experts renowned in their field, have attracted nearly 1,000 companies, universities and nonprofits as members. The federal government’s commitment of more than $600 million to the nine awarded institutes has been matched by more than $1.2 billion in non-federal resources from across industry, academia and state governments.

In addition to the smart manufacturing initiative, the president also announced Monday the launch of five new manufacturing hub competitions, which will invest nearly $800 million in combined federal and non-federal resources to support transformative manufacturing technologies from collaborative robotics to biofabrication of cells and tissues, to revolutionizing the ways materials can be reused and recycled.

With the new competitions underway, the administration is on track to meet the president’s goal of a NNMI of 15 institutes underway across the country before the end of his administration.

To learn more about the open competitions for these next manufacturing innovation institutes, go to manufacturing.gov.